An instrument panel is just something to clutter up the cockpit and distract your attention from the railroad or riverbed you're following.
—Harold T. "Slim" Lewis to a reporter, 1921

Harold T. "Slim" Lewis was one of the service's most colorful pilots. Fellow pilot Dean Smith remembered Lewis as someone who "could drink more and fly better than anyone else I knew." Dean remembered once Lewis showed up for a trip "stumbling and weaving," but was somehow still allowed to fly, and flew his trip superbly.

While flying the mail, Lewis is said to have once buzzed the courthouse at Bellefonte, Pennsylvania so closely that he set the weathervane to spinning. 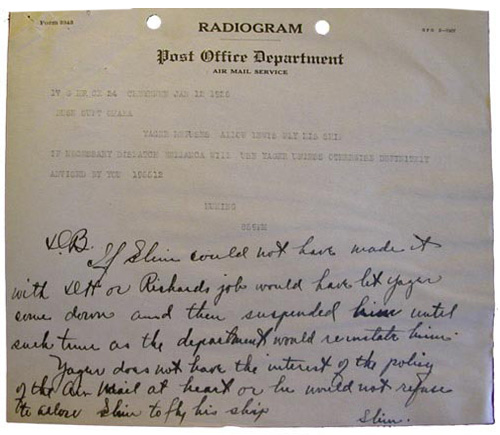 In this telegram, airmail officials note that pilot Frank Yager has refused to allow "Slim" Lewis to use his de Havilland aircraft. In a written rebuttal at the bottom of the page, Lewis remarks that Yager should have been suspended for that refusal.
- Courtesy of the National Archives and Records Administration

On August 30, 1919, Lewis was among the pilots noted in a New York Times article for their daring and speed.

MAIL AVIATORS' RECORDS
Speeds Range from 101 to 132 Miles an Hour.
Special to the NYT.
WASHINGTON, Aug 29 – Reports made by postal aviators to the Post Office Department show that flying across the mountains from New York to Bellefonte, Penn., has proved to be the most difficult route of the Air Mail Service. This is in part due to the fact that the valleys and cities are blotted out by the early morning ground fogs, leaving only the tops of the ridges exposed as landmarks to aviators.

It is also due in part to the changeable velocity and direction of the winds over the 215-mile trip from Belmont Field on Long Island to Bellefonte in the heart of the mountains caused by the variety of topographical changes in valleys and mountains. The greatest wind velocities are found during the Summer time in that region. This is shown in the variations of speed of the fast airplanes of the Air Mail Service.

Out of 101 trips 39 were made at speeds ranging from 101 to 132 mph, and 39 trips were made at speeds between 81 and 100 mph. there were only 4 trips in a period of nearly two months in which the wind was strong enough to hold the speed down to less than 60mph.

The following table shows the speed in mph of the 101 runs made by Postal Aviators Stevens, Lewis, Logg and Anglin:

NEW AIR MAIL RECORDS.
Twenty Aviators Make 1,111 Trips With Only 47 Forced Landings.
Remarkable flying records have been established by aviators in the postal mail service. The Postoffice Department announced yesterday that during the past eight months the twenty air mail aviators in its service have made 1,111 trips; carrying mail, with but 47 forced landings through mechanical trouble. In this period the aviators have flown a total distance of 254,034 miles, or approximately ten times around the earth at the equator.">

The Postoffice Department takes pride in the achievements of its airmen. It says that their performances have been unusually creditable, because nearly one-half of their flying was done under the trying conditions of the most severe winter the country has had in many years.