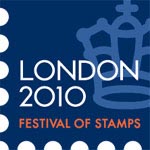 This morning, I waited in line to be among the first attendees of the London 2010 International Stamp Exhibition held at the Business Design Centre in Islington, London, England. This huge stamp show, with tens of thousands of people expected to attend, is held once every ten years and conveniently falls in the year marking another decade anniversary of the world’s first postage stamp, the Penny Black. This year’s show marks the 170th anniversary of this famous stamp (shown below).

Additionally, this year’s show celebrates the 100th anniversary of the ascension to the throne of King George V (shown with his wife above). This king spent a great deal of his spare time during his twenty-five year reign working on his stamp collection. The collection of this “Stamp Collecting King” makes up the bulk of the Royal Philatelic Collection, the personal stamp collection of Her Majesty Queen Elizabeth II.