Marian Anderson: A Voice of a Lifetime

Marian Anderson—one of the greatest concert and classical singers of the twentieth century—was honored on a stamp issued by the United States Postal Service on January 27, 2005. She was the first female singer and the eighth woman to be honored in the Black Heritage Stamp Series issued annually by the U.S. Postal Service since 1978. During the first day ceremony for the stamp, Deputy Postmaster General John M. Nolan proclaimed the stamp “a powerful reminder of her unprecedented contribution to music and to her great sacrifice for justice.”

The ceremony was held in Washington, D.C. at the DAR Memorial Constitution Hall, a profoundly symbolic event given her experience with the Daughters of the American Revolution. In 1939, the organization denied Anderson the opportunity to sing within the very same concert hall because of her race. Subsequently, First Lady Eleanor Roosevelt took steps that ultimately lead to the concert taking place at the Lincoln Memorial where Anderson performed before 75,000 attendees and thousands more via radio broadcast. The 2005 stamp dedication gave President General of the DAR, Presley Merritt Wagoner, an occasion to apologize formally to the nation for the discriminatory treatment against Anderson. 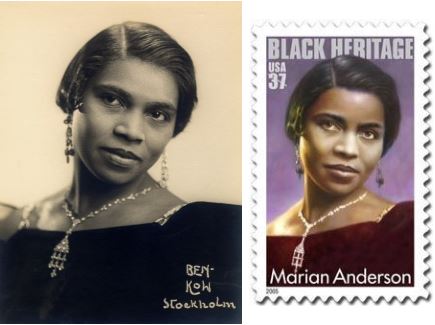 Left: Photograph of Anderson taken while on tour in Sweden, c. 1934. The black and white photo is a head and shoulder portrait of her wearing a formal gown, diamond earrings, and a diamond necklace pendent. Anderson was one of the most photographed American singers touring in Europe during the 1930s and she enjoyed being photographed in her stylish attire. Credit: University of Pennsylvania Annenberg Rare Book and Manuscript Library, Marian Anderson Collection of Photographs 1898-1992, Volume 2.
Right: The 2005 commemorative postage stamp featuring famed singer Marian Anderson was issued as the 28th stamp in the Black Heritage series. The colorful design style of the stamp was partly influenced by the general public, particularly stamp collectors of the Black Heritage Series, who requested that USPS utilize a stronger sense of vibrancy when designing stamps in this series (Linn's US Stamp Yearbook, 2005). 2005 Marian Anderson issue; stamp # 3896. © USPS. All rights reserved.

Born on February 27, 1897 in Philadelphia, Pennsylvania, Marian Anderson showed her talents early and was singing at the age of six with the Union Temple Baptist Church. Members of her church congregation raised funds to pay for her training, allowing Anderson to study under the esteemed Giuseppe Boghetti. In 1925, she won first prize in a voice contest sponsored by the New York Philharmonic Society and earned an appearance with the orchestra. Other engagements soon followed, including a performance at Carnegie Hall, but opportunities in America were impeded by racism. With support from the Julius Rosenwald Fund, she embarked on performance engagements throughout Europe during the 1930s and appeared at some of the world’s finest concert halls. Her European tours made headlines back home in the African American press, which delighted in showing photos of her dressed in designer gowns and minks socializing with members of European royalty who revered her. It was during this time that the photographic portrait of Anderson that eventually became the basis of the 2005 U.S. stamp was taken in Sweden by Moise Benkow.

Her accolades were extensive. In August 1935 at the Salzburg Germany film festival, Arturo Toscanini told Anderson “Yours is a voice such as one hears only once in a hundred years.” Because of her European success and emerging fame in America during the late 1930s, she was invited by President Roosevelt and his wife Eleanor to perform at the White House in 1936. She became the first African American ever to receive this honor.

Anderson’s career as a contralto lasted decades marked with numerous honors and achievements. She was the first African American to perform with the Metropolitan Opera and a charter recipient of the Presidential Medal of Freedom. Her artistic accomplishments and the renowned 1939 concert at the Lincoln Memorial elevated Marian Anderson as an icon of the twentieth century. To create a commemorative stamp of Anderson, the Postal Service tapped Albert Slark, a Canadian portraitist.

Slark took inspiration from the Benkow photograph for his oil painting which was then used to produce the Anderson stamp. Slark portrayed Anderson as an elegant and youthful woman dressed in a dark burgundy gown, strikingly offset by a lavender background. However, the final artwork submitted to the Postal Service lacked one crucial detail – an earring was missing from Anderson’s left ear. The look for the always-fashionably-turned-out Anderson would have to be completed. With the aid of digital software, the Postal Service added the earring with appropriate lighting and tilt for the pose and prepared the final image for production (Linn's US Stamp Yearbook, 2005).

About the Author
Calvin Mitchell is an Assistant Curator of Philately. His interests are African American History and Philately, Military Postal History, movies and football. While working at the National Postal Museum, he likes the opportunity to access the museum's vast collection to perform historical research and write about interesting philatelic topics.