Brian McMullen was killed while flying the Chicago-Omaha route in bad weather. Forced down near Batavia, Illinois, McMullen's airplane stalled while he was trying to squeeze into a small field. The aircraft spun into the ground. The gas tanks exploded, trapping the pilot in the flames.

McMullen's life and accident was recorded in the Washington Post as follows:

From October 22, 1920:
BRYAN McMULLEN TRAPPED IN FLAMES
Gasoline Tank Explodes as airplane Strikes Ground
Bryan McMullen, whose home was at Dallas, Texas, a pilot who had joined the aerial mail service a month ago, was burned to death last Saturday morning near Batavia, Illinois, when in attempting to make a landing: his airplane struck a telephone wire and crashed to earth bursting into flames. McMullen was said to be one of the best pilots at the field and had always been a steady, conservative flyer, never attempting fancy spectacular stunts. McMullen left the Checkerboard Field Saturday morning; at 5:52 o'clock carrying a load of mail for Omaha. At 6:20 o'clock Mrs. George White, wife of a farmer at Bald Mound, near Batavia, saw the airplane descending and called her husband. They were watching the airplane glide towards the ground when it struck the wire, flopped over like a giant bird that had been shot, and landed in the field upside down.

Burst Into Flames
Almost immediately it burst into flames, and White and his wife rushed to the rescue of the aviator. The flames were so intense, however, they could not get near enough to aid him and his body, strapped to the seat, was almost entirely burned up. The larger part of the mail cargo was also destroyed. McMullen had been flying quite low for some miles prior to the accident, showing he either had lost his way in the fog or was having some trouble with his motor.

An Overseas Veteran
McMullen was an overseas veteran. His wife came here a few days ago and then went to Omaha to establish a home, following his assignment to the Chicago-Omaha mail service. E. M. Majors, in charge of the air mail service here, flew to Batavia to investigate the accident and take charge of the body.

According to his mother, McMullen should not have been allowed to make his fatal flight. "My son had an accident on the first of the week and was in no physical condition to fly the mail on the morning of Saturday, October 16, 1920. He did so against the advice of his physician and co-flyers and the result was owing to his weakness, and I feel now an old disabled ship, he had this fatal accident." McMullen, like many of the airmail pilots, was given to shaking off injuries and pain in order to fly again. Sometimes it was for personal pride, sometimes for the 5 cents per mile that pilots received in addition to their annual salaries. 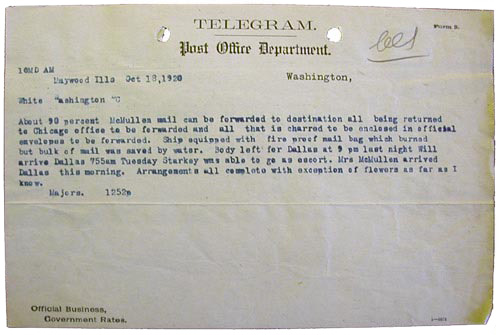