SAN FRANCISCO GETS FIRST MAIL BY AIR
Airplane Which left New York Wednesday Morning Arrived at 2:33 P.M. Yesterday.
Special to the New York Times
SAN FRANCISCO, September 11.—Airplane No. 151 of the United States Aerial Mail Service landed at Marina Field, near the Presidio, this afternoon at 2:33 o'clock. It covered the last 250 miles of the trip from Reno, Nevada, in one hour and fifty-eight minutes, and thereby broke all previous records for the same distance.

E. E. Mouton of Oakland, Cal., brought the machine in against a head wind. As soon as he landed, the six bags of mail were put on an automobile truck for distribution at the main post office. Postmaster Charles Fay and Colonel William V. Morgan, head of the postal air service on the coast, warmly greeted Mouton and later escorted him to the Olympic Club. Two bags of air mail left here on the 4 o'clock train for Washington, and one for Oregon, the other three remain in California.

J. Woodward left Lovelock this morning at 8 o'clock as pilot of No. 151, but was obliged to descend soon after, and Mouton took his place. Mouton was formerly with the Lafayette Squadron in France and later a general test pilot with the A.E.F. 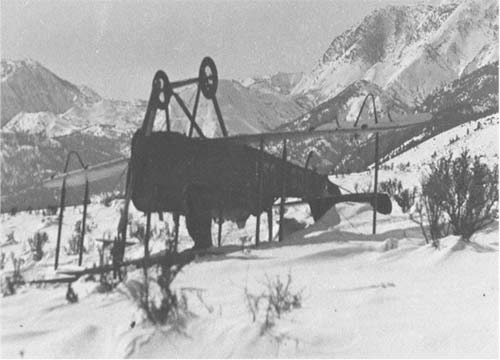 Mouton's de Havilland on the Nevada mountain after a crash landing. 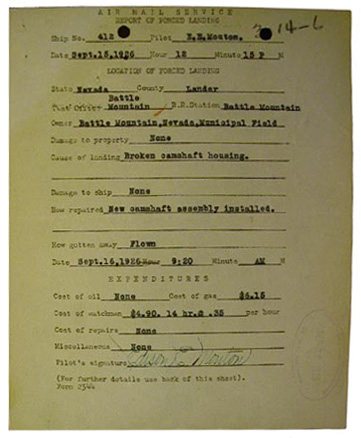 This forced landing report was filed by Mouton on September 16, 1926. He explains that due to a broken camshaft housing, hew was forced to land at a municipal airfield in Battle Mountain, Nevada, for assistance. He was unable to leave until the next morning.
- Courtesy of the National Archives and Records Administration