James P. Murray carried the mail over the Rockies on the historic 1920 cross-country flight, flying into Reno at sunset. After his airmail service career, Murray turned to law, and was admitted to the Wyoming Bar in 1927. Murray lived for many years after that, eventually moving to Washington, DC to work as a lobbyist for Boeing. He died in 1972.

On October 18, 1920, while Murray was flying the Salt Lake City - Cheyenne route, he survived a bad crash. He had crossed the Wasatch front successfully and was following the Union Pacific tracks from Rock Springs to Wolcott. "Ahead was the Medicine Bow range, cloud-covered except for the top of 12,000 foot Elk Mountain. Gap in the clouds lured him south. Tried to slip through the mountains to Laramie Valley, but the gap closed in a blinding snowstorm." Unable to turn around, he kept east. "Could see only tree tops below and a white wall ahead. Trees kept getting closer. I gradually climbed the machine full engine, until it stalled. The treetops were 50 feet away. I cut switches and pancaked into treetops."

Murray crashed just before 5 p.m. He used the setting sun as a point of reference and walked one hour in two inches of snow, camping below a cedar tree for the night. He finally found a road and help. He had covered 14 miles in 8 hours. 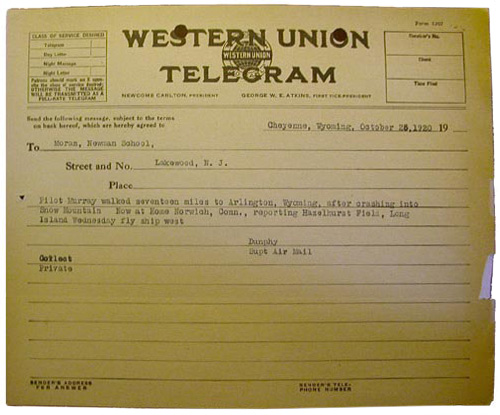