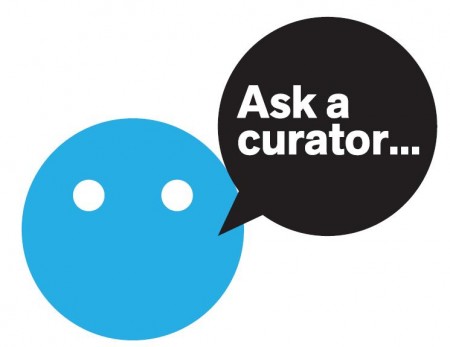 When you think of a “curator,” what do you envision? Ever wonder what exactly a curator does? How do they pick which objects go on exhibit? Yesterday’s “Ask a Curator Day” on Twitter gave the public a chance to find out.

Ask a Curator Day was a worldwide question and answer session in which more than 300 museums from across the globe participated. The Postal Museum fielded a constant stream of questions all day. In the end we answered 85 questions—and we answered them all in Twitter’s required 140 characters or less! Three museum curators participated, Nancy Pope, Historian/Postal Operations, Tad Suiter, Assistant Curator/Postal Operations, and Marv Murray, Assistant Curator/Philately. Thanks to our curators for being good sports and coming up with incredible answers!

Questions from visitors were wide ranging. They asked everything from general questions about what it’s like to be a curator to specific questions about mail delivery, objects in our collection and philately. Here are a few of our favorites:

Q: [museums365] What’s your favorite artifact and what’s the best thing about being a curator? Love the museum!
A: One of my favorite objects is a tiny wooden box used to mail a queen bee.

Q: [@Bashfully] What do you all say when people tell you “the mail is dead” or something similar?
A: It is down but not out. Fewer letters but more packages until your computer can deliver a sweater.

Q: [ocaptmycapt] You mentioned the Inverted Jenny’s popularity – but is that the most rare stamp in your collection?
A: It’s one of them but the rarest is the Z Grill

Q: [@Qindary] What are the three most important letters ever written, in your opinion?
A: Would love to have Einstein’s 1939 letter to President Roosevelt re: the A-bomb, or one btwen John & Abigal adams re: new nation

Q: [@HappyHomeStager] I've always wondered how exhibition titles/topic are chosen. Lately they seem to be very creative.
A: Some come easily but many take lots of discussion. It should be creative & describe exhibit. Tricky line to walk sometimes.

Q: [@ingek73] If you work with the public what’s the weirdest question you've ever come across?
A: We have a flight suit worn by Amelia Earhart. I was once asked if it was the one worn on her last flight

Our most retweeted response of the day was to this question:

We even got inspired to ask a few questions of our own. We asked curators, “Do you use letters and stamps in exhibits? If so, how?” The Tenement Museum in New York responded that they use letters in their research and showed us two letters they recently found in their building. One of which was a long lost love letter.

The best part of ask a curator day was engaging with so many members of the public in the informal space Twitter provides. For one day we were able to open up the expertise and passion of our curators to the Twitter community. The response from users was inspiring. Here are a few responses: 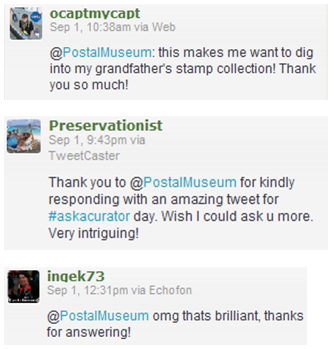