The National Postal Museum is pleased to announce its newest exhibition My Fellow Soldiers: Letters from World War I which opened today, exactly 100 years after America declared war on Germany and joined the Allied forces in their fight against the Central Powers. Once considered the war to end all wars, this international conflict redefined nations and ushered in the modern era. More than 17 million military personnel and civilians are estimated to have perished; overall casualties total approximately 38 million.

Notwithstanding these staggering statistics, My Fellow Soldiers… uses original letters to examine WWI through a deeply personal lens. In this way, we can reflect upon the enormous impact the war had on the individual. “This incomparable selection of wartime correspondence illuminates the thoughts and emotions of the authors as they grapple with the effects of World War I,” said Lynn Heidelbaugh, the exhibition’s curator. “The experience of sending and receiving letters resonates with us on an emotional level, and reading these firsthand accounts helps make the history relatable today.”

To celebrate the opening, the museum hosted a special after-hours event last evening, which was sponsored by Chapman University’s Leatherby Libraries. Guests enjoyed thematic activities, light refreshments, and rousing WWI-era music; a speaking program featured dramatic readings of letters shown in the exhibition. Here are some of our favorite photos of the event: 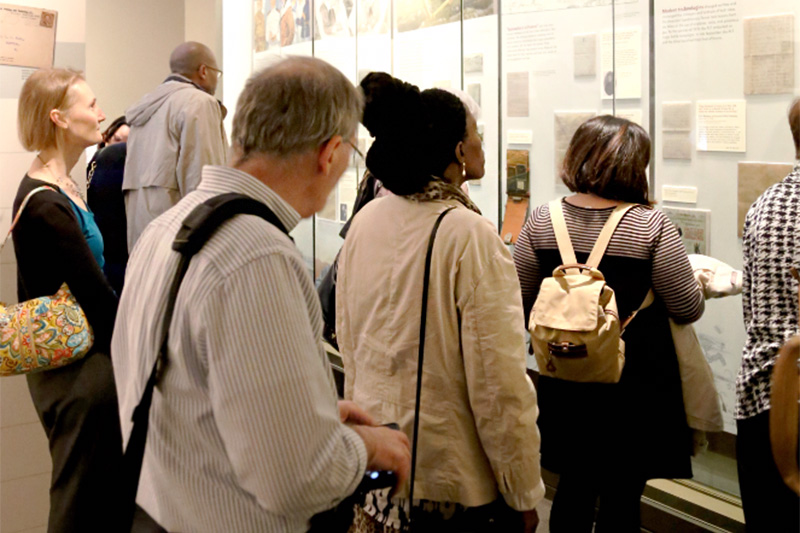 Attendees got a sneak peak of the exhibition before its official opening. In addition to 100-year-old original letters, My Fellow Soldiers… displays writing kits used by soldiers on the front lines, early iterations of the fountain pen (“trench” pens), period pop culture items, an interactive kiosk, and other artifacts. 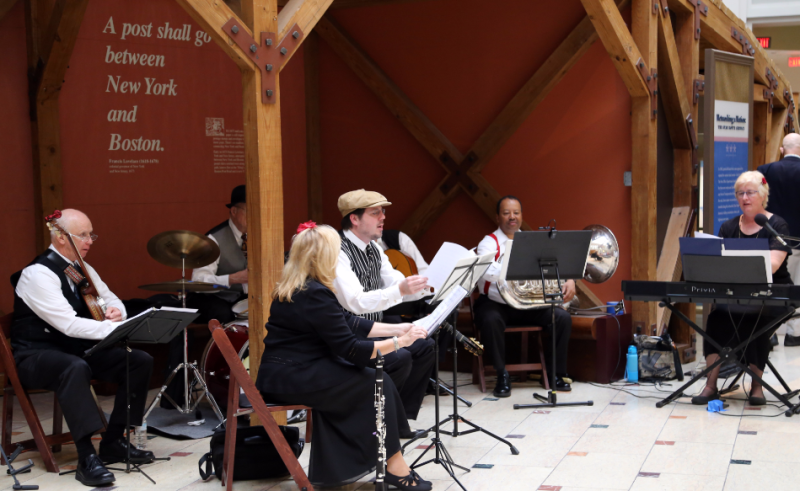 The Jefferson Street Strutters, a group of very talented local musicians, enhanced the evening with a repertoire of songs popular during World War I, including hits like “It’s a Long Way to Tipperary.” The lyrics of this 1912 song mention being far away from loved ones and using letters to keep in touch.

A portion of the program was comprised of lively readings of letters featured in My Fellow Soldiers… including a series of messages between a husband and wife separated by the war. 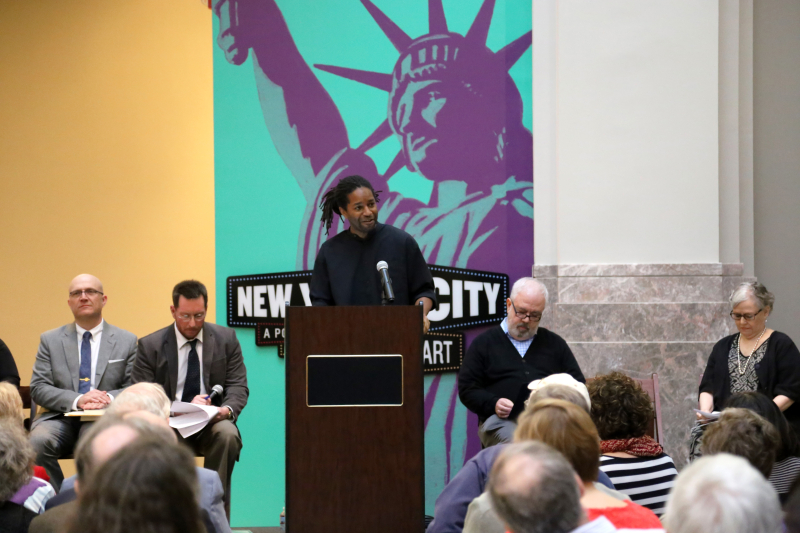 The letters were presented by Andrew Carroll, Director of the Center for the American War Letters; William H. Sondheimer of the United States Postal Service; Rex Carnegie, Former Creative Director at the National Museum of American History; and Claire Calland, a beloved National Postal Museum Volunteer. 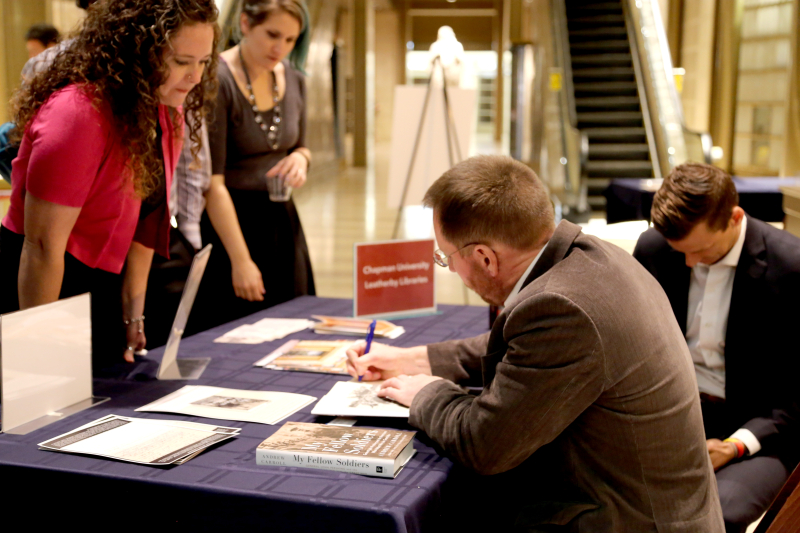 Andrew Carroll, the Director of the Center for American War Letters and bestselling author, signed copies of his new book, My Fellow Soldiers: General John Pershing and the Americans Who Helped Win the Great War, released on April 4, 2017. 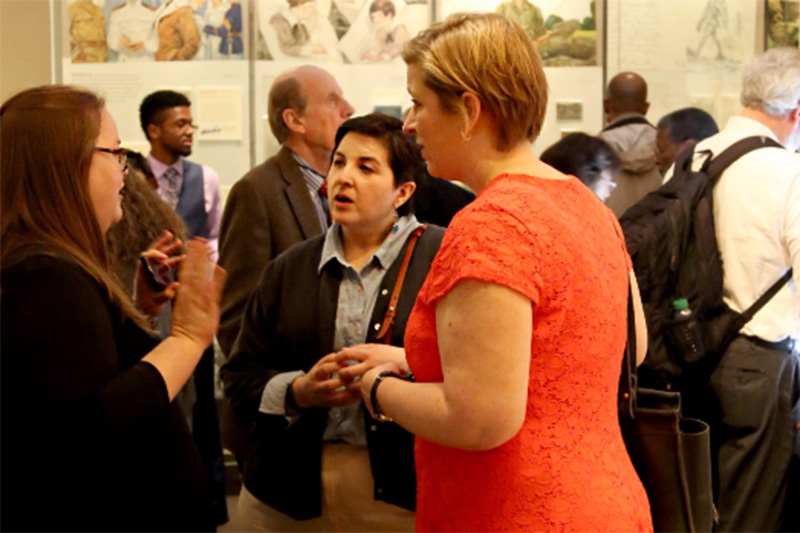 My Fellow Soldiers: Letters from World War I was created by the Smithsonian’s National Postal Museum in collaboration with the Center for American War Letters at Chapman University. This exhibition was made possible, in part, through the generous support of the Veterans of Foreign Wars. My Fellow Soldiers… will be on exhibit at the National Postal Museum through November 29, 2018. Throughout the exhibition, the museum will host several topical programs and events. Join us on Wednesday, April 19th, at noon for a Lunchtime Lecture with Robert Enholm, a Global Fellow at the Woodrow Wilson Center for Scholars and Former Executive Director of the President Woodrow Wilson House. Mr. Enholm will discuss Woodrow Wilson’s presidency through the lens of the Post Office, including war letters, new technology, segregation and love letters. The museum will also participate in a World War I Social Media Day on Tuesday, April 11th, with other museums and institutions in the greater D.C. area. From 12 – 1 p.m., meet us on our Facebook page to see Lynn Heidelbaugh share objects related to censorship and the mail during World War I via Facebook Live and answer your questions in real time!

World War I
Back to Top
My Fellow Soldiers: Letters from World War I | National Postal Museum