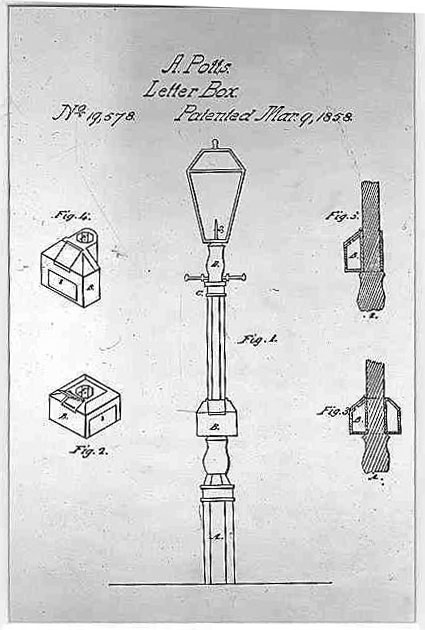 On this day in 1858, Philadelphia iron products manufacturer Albert Potts patented his design for a lamppost mounted collection mailbox (patent #19,578). His box was designed to be mounted to a lamppost so people could drop their letters into the box instead of making a special trip to the post office to mail their letters. Potts called his invention a “new and Improved combination of Letter-Box and Lamp-Post for Municipalities.” The bulk of Potts’ brief patent description details how the mailbox should be attached to the lamppost. His hope was not only that the US Post Office Department use these new collection boxes (which they did), but that cities would purchase his company’s lampposts to match (that part of his plan was less successful).

Potts noted that this new type of collection unit would “afford greater facilities to the inhabitants of large cities for the depositing of letters, and … enable the carriers to collect, or the citizens to deposit therein, at any period of time.” The Potts mailbox was the first of the postal system’s street collection mailboxes, but was, even in 1858, too small for the job. Over the next few decades dozens of inventors and designers patented a variety of “new and improved” collection mailboxes (see examples below), from overwrought, baroque-inspired ornate structures to boxes fitted with complex machinery for customer’s or carrier’s “ease of use.” Few designs made postal officials’ final cut, but they tended to have one thing in common – simpler in design and use.