By Guest Blogger, John Tingey author of The Englishman Who Posted Himself and Other Curious Objects

In 1898, a young man from Kent, England purchased a copy of the official guide into the services and regulations of the British Post Office. A keen collector of stamps and postmarks, Bray’s main interest was to gain access to a full list of all the Post Offices in the country. His attention, however, was drawn to the wording of the rules pertaining to the postal services. In the guide he discovered that there were no restrictions on how items could be sent or addressed. He discovered sections relating to live animals and, specifically, bees. He even came across a little known facility by which a person could be delivered to any address. 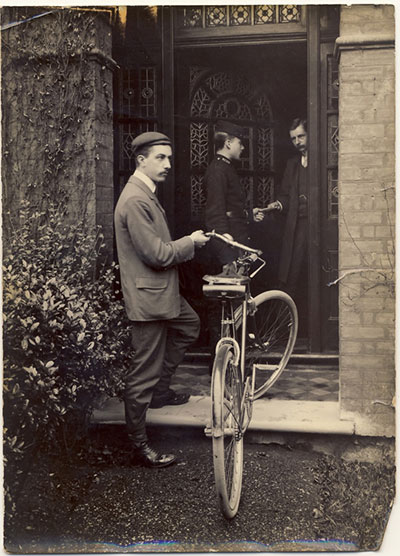 Bray being “delivered” to his home in Forest Hill in 1903.

Bray became fascinated by the working of the British postal system and devised a number of clever techniques to test these regulations. He sent many fascinating items through the post including himself, his dog, a bowler hat, a turnip (into which he had carved his name and address), a slipper, a cigarette, a bicycle pump and a shirt collar. He was also infamous for writing the address using a variety of techniques that were designed to test the deductive powers of the postal authorities. For example he would write the address in verse or use small pictures to replace key words. He would attach pictures of towns or (unnamed) personalities onto the front of cards and expect the Post Office to determine the destination. He would even attach train tickets and ask for the card to be delivered to the Station Masters of both the boarding and embarkation railway stations. 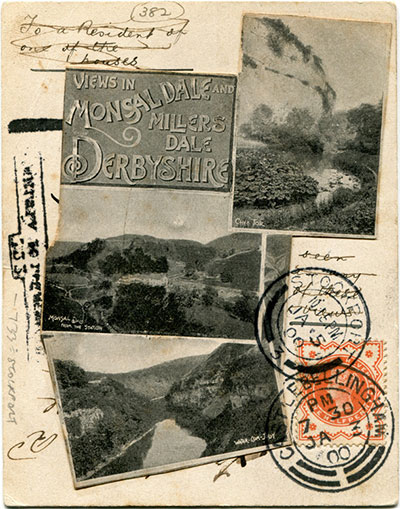 Post card where the address has been replaced by a picture cut out from a newspaper. The card is simply addressed to “a resident.” 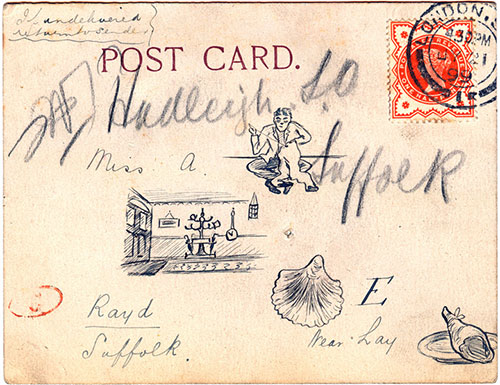 Post Card with the address written partly in pictures.

As time went by, Bray’s interests changed from creating postal curios to amassing the world’s largest collection of autographs. He sent out about 30,000 requests of which approximately half were successful. He managed to obtain the signatures of almost all of the important figures of his time, including American Presidents, European Heads of State (excluding Hitler), leading sportsmen, actors and aviators. The many wars gave him ample scope for securing an enviable selection of military autographs from such conflicts as the Boer War, Russo-Japanese War, Spanish Civil War and, of course, the Great War.

Newspaper article describing Bray's scheme to get an autograph by sending a check (pictured) requiring endorsement.

First impressions of Bray would lead you to think that he was a very ordinary man. An accountant living in a modest house in the suburb of Forest Hill, there was nothing to indicate the torment to which he would submit the Post Office. It would only be an invitation to visit the inner sanctum of his study that would reveal his true identity. He had a very typical English sense of humour, favouring the witty and bizarre rather than the flamboyant. He was meticulous in his record keeping, maintaining details of all his postal exploits in large ledgers. And of course, he was artistic and imaginative. He was also very proud of his achievements and sought out any opportunities to show to the world his successes. This included displaying some of his treasures at major exhibitions; writing a number of articles for magazines and periodicals; and being interviewed by the BBC Radio programme In Town Tonight. 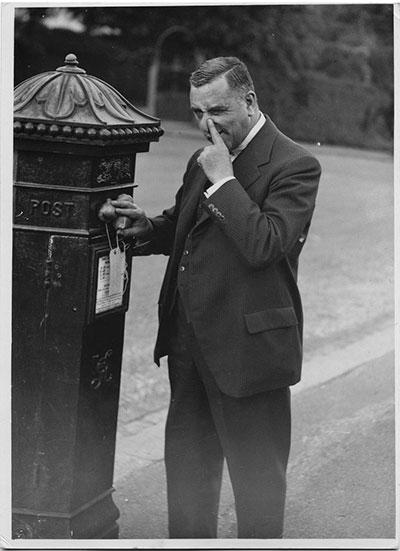 Bray posing “posting” some onions whilst tapping his nose in a knowing manner.

More information about Bray and his antics can be found in The Englishman who Posted Himself and Other Curious Objects published by Princeton Architectural Press, New York.