Owney Embarks on his Makeover

Owney the Railway Mail Service dog traveled again this week. The old dog is getting a “makeover” to preserve and improve his appearance in preparation for a new exhibit and the release of his US postage stamp.

Owney embarked on his journey last week. He left his exhibit case beside the museum’s Railway Post Office and was replaced by “Phony Owney,” a fiberglass model of the famous dog.

Head of preservation Linda Edquist and her staff then carefully removed Owney’s collar, jacket, and harness, wrapped him in Tyvek, and carefully crated him. 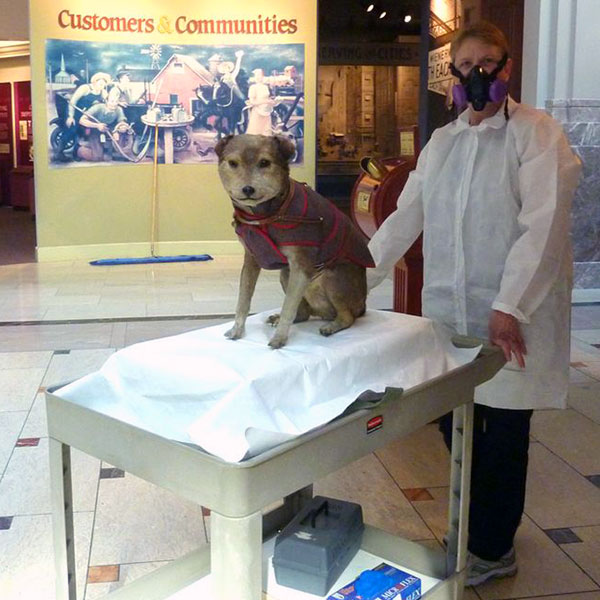 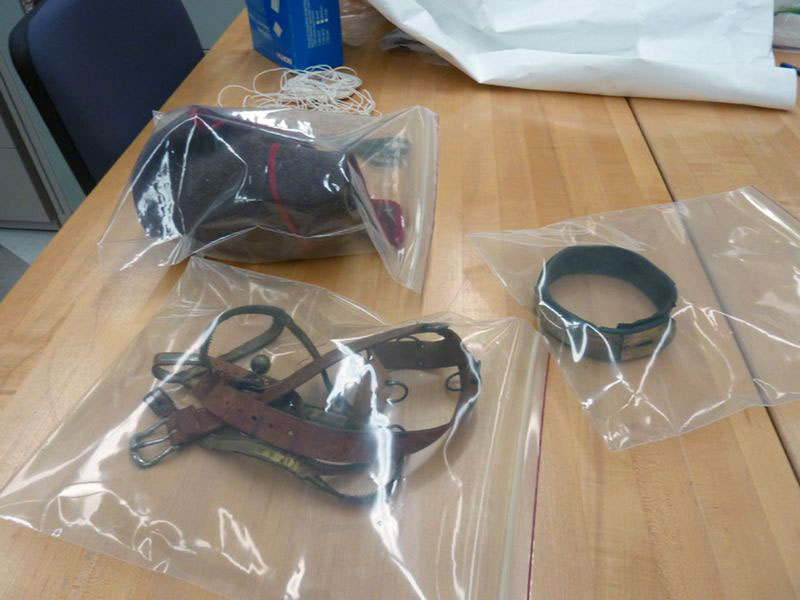 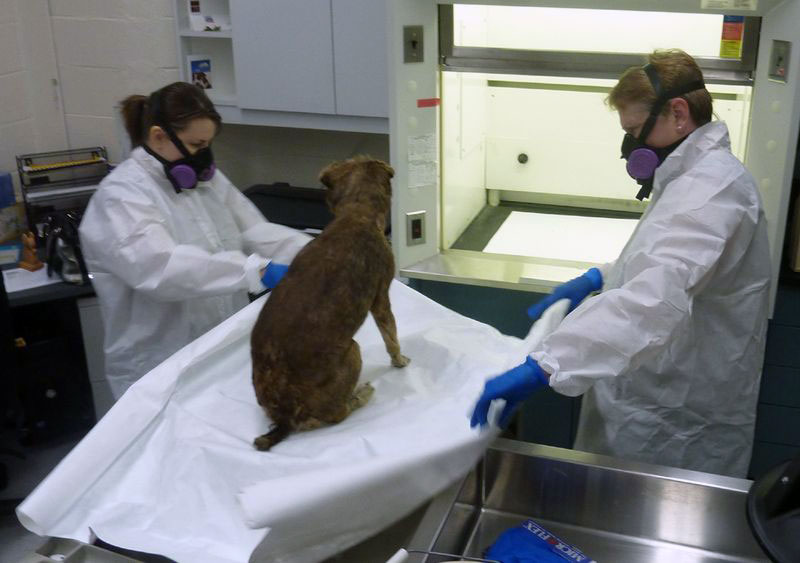 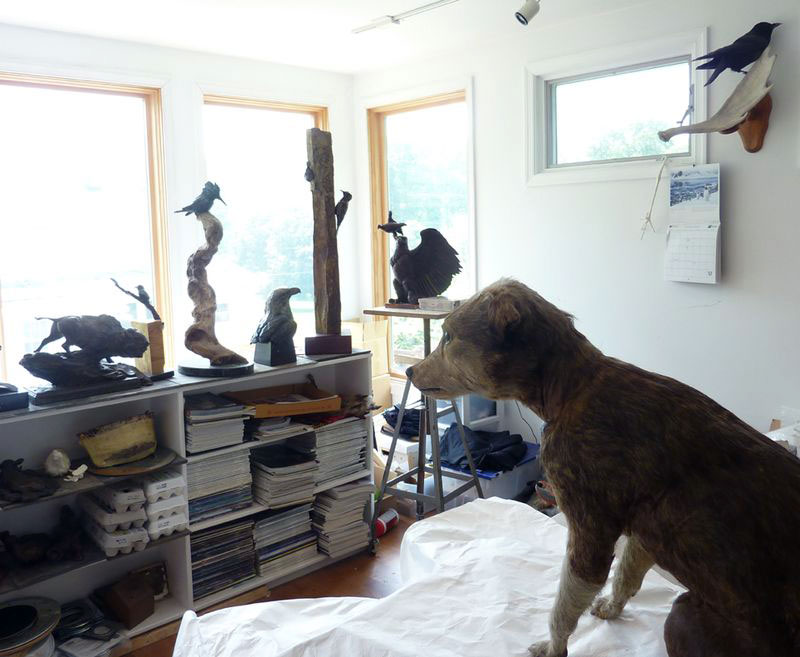 Owney was crated for his trip to the taxidermy studio.

Owney was driven to Point of Rocks, Maryland, to the studio of taxidermist Paul Rhymer. Owney was carefully uncrated and carried into Rhymer’s studio by professional art handlers.

Rhymer is both a taxidermist and a professional sculptor and Owney found himself surrounded by both sculptures and examples of Rhymer’s taxidermy work.

Once Owney was unwrapped from the protective Tyvek, Rhymer had his first opportunity to examine Owney in detail. 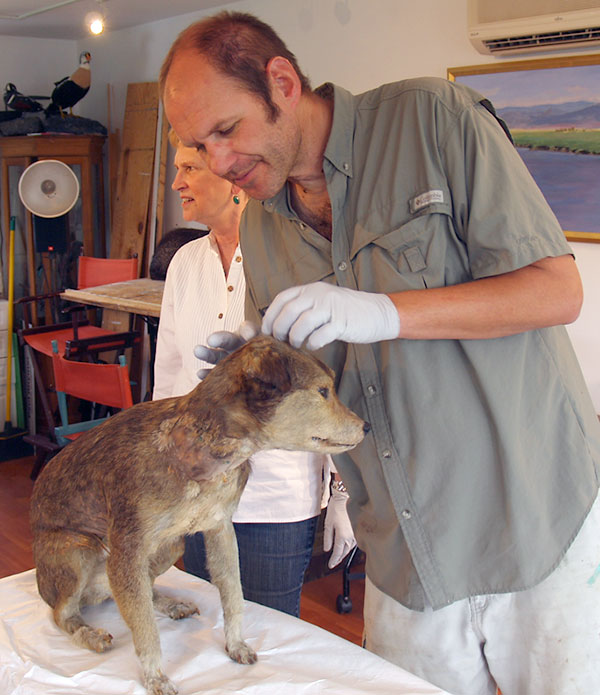 Owney at the taxidermy studio

Rhymer’s first impression was that a thorough washing would be extremely effective toward improving Owney’s appearance. In addition to dust and dirt, Owney’s original taxidermist used wax and paint to give Owney’s features color and definition; this technique was typical at the time but hasn’t aged well. Removing the wax and paint will lessen the severity of Owney’s appearance and also bring some fluff back into his fur. 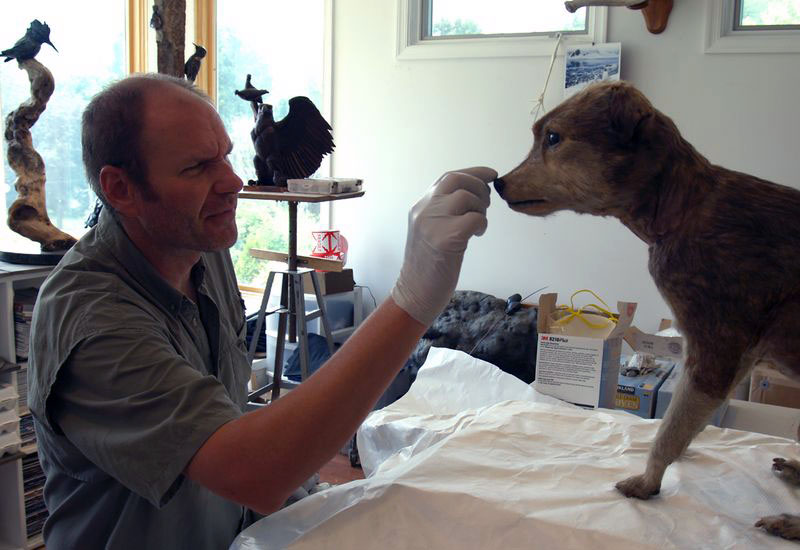 Rhymer plans to dye Owney’s fur in places where it has become discolored, add fur where needed, and possibly re-sculpt Owney’s nose to give it a more natural appearance. In his initial examination, Rhymer identified rabbit, fox, and coyote fur used in the original taxidermy and noted that Owney’s two front paws are in good condition while his back paws will require some work. 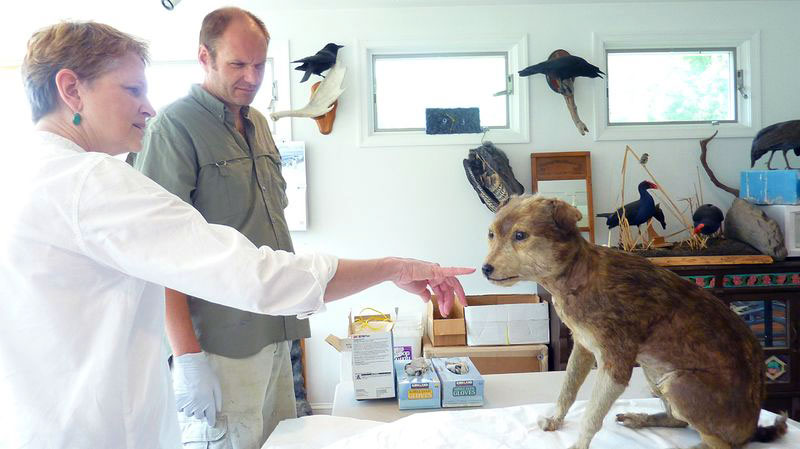 Owney's nose may need to be re-sculpted

One of the goals of Rhymer’s work will be to give Owney a more natural appearance, something Rhymer is uniquely capable of doing. As a sculptor, Rhymer has lots of experience observing and drawing inspiration from the natural world. His house (which is separate from the studio where Owney will stay) is currently home to nine dogs, including six newborn puppies, so Rhymer will never lack real life models of canine cuteness. With the addition of Owney, there are now ten canines on the Rhymer property, along with brass sculptures of hippos and a pond of  orange fish. The creatures below are also part of Owney's new surroundings.

Owney returns to the Postal Museum on July 27, 2011 for the opening of his new exhibit, issuance of his postage stamp, and a four-day family festival celebrating the lovable mutt. Until then, stay tuned for updates from Rhymer’s studio, ongoing curatorial research on Owney’s history, and more. Have a question or want to wish Owney luck in his makeover? Check in with him on Facebook or Twitter.