Owney was a common mutt, recognized as at least part terrier. If not for his national fame, he would have had no place at a dog show (called “Bench Shows” at the time). Not only did he attend some, but was the star attraction of at least two such shows, including the large 1893 Los Angeles show. 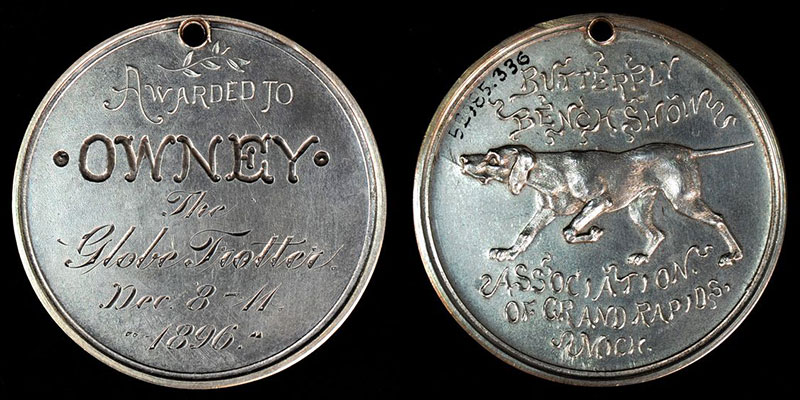 This tag was engraved for, and given to, Owney during a 1896 dog show in Grand Rapids, Michigan. The tag notes that it was awarded to “Owney the Globe Trotter” by the Butterfly Bench Show of Grand Rapids. On December 10, 1896, the Los Angeles Times noted that the show opened with “300 entries divided into eighty classes. The exhibits are of a much better class than last year, including some of the finest dogs in the country.”

Owney was no stranger to dog shows; although by no stretch of the imagination would anyone have called him one of the “finest” show dogs in the country. Promoters celebrated his adventures and travels, not the dog’s pedigree.  While Owney’s attendance at dog shows across the country often made the news, not all approved. A short notice in Turf, Field and Farm’s May 13, 1892 issue noted that “Owney, the mail dog, . . . is again the means of filling considerable space. Not that he has done anything particularly new, but because space at this time is so hard to fill. Owney’s cognomen should be ‘Blarney.’”

The Los Angeles newspapers welcomed Owney with open arms on each and every visit. In a column from April 20, 1893, the LA Times noted that Owney “arrived last evening on the through express train from the north in the most opportune time for renewing acquaintance with his many four-footed friends gathered at the bench show. Owney is the best known dog in the United States and enjoys the reputation of being the greatest bummer on the continent. He makes periodical trips across the country from the East, always riding on the mail-car, and enjoying the freedom of getting off when and where he pleases, and continuing his trip again without molestation or being troubled with the disagreeable duty of having to pay fare.”