At a recent Women's History Month stamp collecting activity, a museum visitor asked me about a woman on a US postage stamp that he didn't recognize. It was Frances Perkins. I struggled to convey something of Perkins' incredible biography, but the story was too big to convey. After the program, I promised myself I'd write a blog post to share more about this inspiring woman and today seemed like a perfect day to do it. 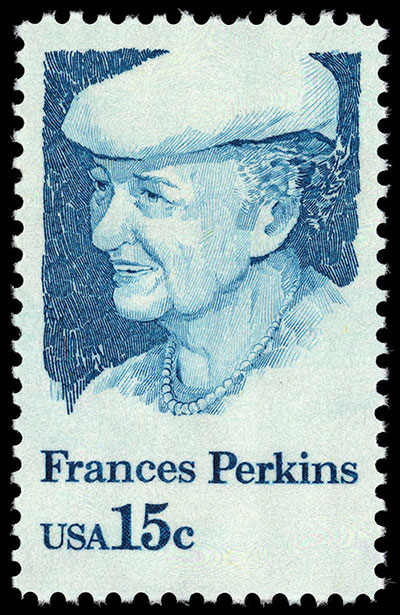 Today, March 25th, is the 100th anniversary of the Triangle Shirtwaist Factory Fire, in which a dropped match on the 8th floor of the factory sparked a fire that killed over 100 people trapped inside. The rusted fire escape collapsed and doors were locked shut to prevent theft; some leapt to their deaths through factory windows. Most of the victims were female immigrants, some of which had only recently participated in an industry-wide strike to agitate for shorter hours and better conditions. The blaze took place on a sunny day in Greenwich Village, New York, where many witnessed this horrific event.

One witness was particularly affected. Frances Perkins was 31 years old and worked at the National Consumers League, an organization dedicated to fighting child labor and bad working conditions. Of particular interest to Perkins was fire safety and fire hazards in factories and retail stores.

In a PBS interview, Kirstin Downey, author of The Woman Behind the New Deal, explains how the fire impacted Perkins’ life and career. Years later, she was in an ideal position to make the nationwide changes she had been inspired to enact since witnessing the fire. She became Franklin D. Roosevelt’s Secretary of Labor in 1933. “When she joined Franklin Roosevelt as his Secretary of Labor … workplace safety was one of the key issues that she brought to his attention,” said Downey. She urged officials across the country to enact workplace regulations similar to the ones implemented in New York in reaction to the fire. “That’s why anywhere that you go in the United States now you will see signs on occupancy limits… you will experience fire drills, you will know where the fire exits are. These are all landmark actions taken by the State of New York and it spread everywhere thanks to Frances Perkins' stewardship in 1913 and for the next 60 years,” Downey said.

Perkins was commemorated on a US postage stamp in 1980. Downey spoke at the Postal Museum as part of programming related to the exhibit Delivering Hope: FDR & Stamps of the Great Depression.

Women in the Postal Service and Philately
Back to Top