Rural Free Delivery (RFD) was introduced as an experimental service in 1896. By the end of 1902 it had become a permanent fixture in American life in rural towns across the country and was growing at an extraordinary rate.

In order to create a successful and economical RFD route, the Post Office Department often had to consolidate small, fourth-class, post offices in favor of one post office that would operate as the headquarters for rural delivery clerks for the designated area. The drop was significant. Post office numbers peaked in 1901 at 76,945. In 1912, ten years after the service became official there were 58,729 post offices in the U.S. In just a decade Rural Free Delivery consolidations had forced the closure of over 18,000 post offices. 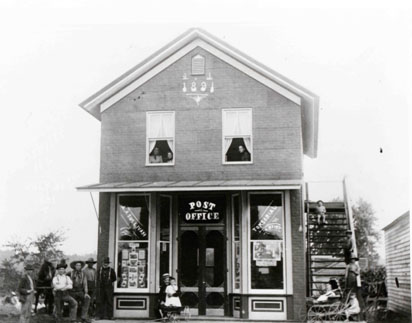 A fourth-class postmaster’s position was highly prized in rural America. Although the job paid very little, it drew trade into the postmaster’s store and conveyed the mark of a town leader on the lucky recipient.

Unlike today’s post office closures, most rural Americans welcomed the consolidations. They may have lost a post office, but they gained regular mail delivery, a happy exchange. The big losers were America’s fourth-class postmasters, who relied on these jobs for extra money and prestige. The postmasters went down fighting; using every influence they could with elected officials to keep their offices open. Some were so successful that Congress forced an office to stay open even when a RFD route had made it superfluous. The Post Office Department lost a considerable amount of money in the early years of the service on such double-coverage areas.

Ranch and Range’s editors showed sympathy for the fourth-class postmasters in an article from 1901.

But like other progressive changes this involves some sacrifices. It means the abolition of that time-honored, highly prized and delightful American institution, the country post-office, and the effacement of that important, interesting, useful and agreeable functionary, the fourth-class postmaster. In many cases it means also the closing of the store in which the post-office is located and the transfer of the owner to some other occupation, for with his government salary given over to the mail carrier and is neighbor’s patronage withdrawn and sent to the city, he can no longer do business at the old stand.(1)

A Kentucky newspaper editor was less understanding of their plight.

When such advantages as these are to be had for a little exertion, there is no reason why Kentucky may not be covered by the mail-carrier on his daily delivery trips. The objection of the fourth class postmaster who hopes to hold his trade by his exclusive privileges ought not to have any weight with the people. Get up petitions and have them approved by your Representative in Congress or your Senator; get good maps made and the government will do the rest.(2)