As the Accessions Officer here at NPM, I spend a lot of time looking through the files that have been kept for all the objects accepted (accessioned) into the permanent collection since the 1880’s, when the National Philatelic Collection was first started. These accession files are sorted by number, and house all the information that is available regarding the origins of the objects in the collection.

These days, the collections staff takes great care in making sure every object we receive has its identifying accession number clearly marked in an unobtrusive spot. Unfortunately for the collections department, the museum received thousands of objects in the years before such labeling was considered important. Back in storage there are many objects that are not currently labeled, which can sometimes make identifying them very difficult. What some might consider a nuisance, I consider quite fun: I get to play detective in our accession files. 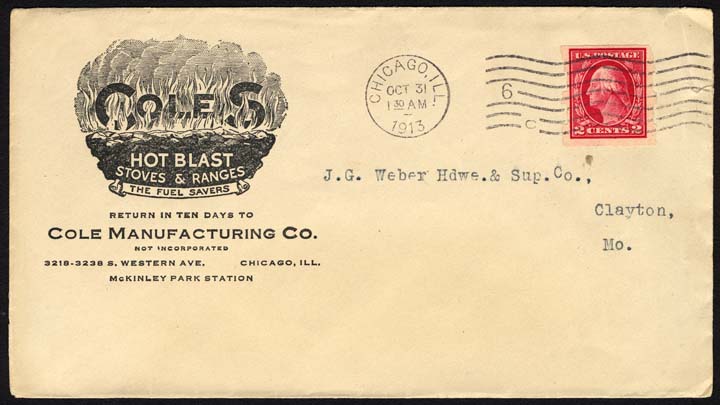 I recently came upon a mysterious cover in the collection (above). I made a few notes on some immediate clues the cover had to offer. My first clue was the advertisement printed on the left side. Even some of the more vague files would make a point to list this as an “advertising cover.” That began to narrow my search. My second clue was the number “6” and the letter “C” interspersed in the wavy killer of the cancel. I filed these clues away in case they might help me later.

I flipped the cover over to look at the reverse. In tiny lettering, I noticed a faint, purple stamped marking. I thought I could make out the word “Samuel” and something like “May” or “Ray.” Now that was a clue! I started searching through our early donor records– 3x5 index cards that are sometimes nearly 100 years old. I was happily shocked to find a Mr. Samuel Ray in the files, who donated objects to the museum (the National Museum of History and Technology at the time of the donations) several times between 1966 and 1972. 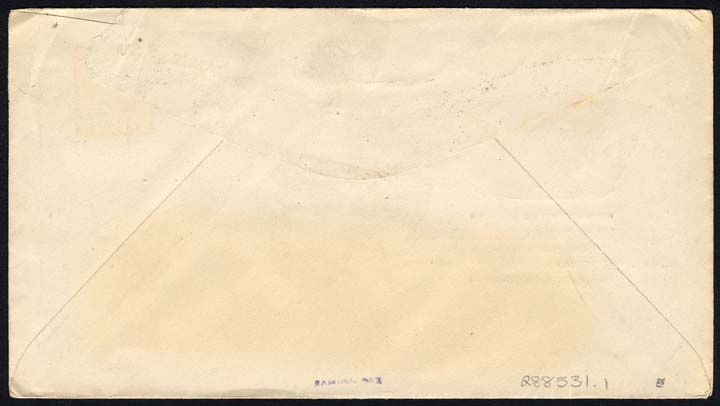 One of the files I pulled to look through described a donation by Samuel Ray in 1970 of seventy-four covers, all showing numerals applied in the cancels. Bingo! I had found the correct accession file for the cover! The cover, a 2c Washington single line watermark single on cover, is now correctly identified in the collection records and in our database. Look out for this object in the upcoming National Stamp Collection exhibit in the William H. Gross Stamp Gallery!