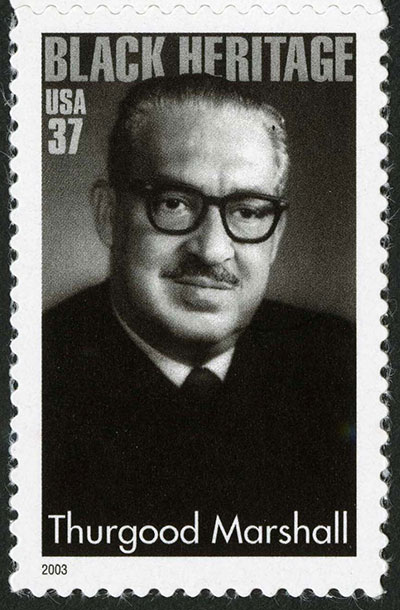 By the time Thurgood Marshall was appointed to the United States Supreme Court on this day in 1967, he had already made his mark on the “highest court in the land.”

One of the most influential voices of the African-American civil rights movement, Marshall won more cases before the Supreme Court during his time as chief counsel of the NAACP and as U.S. Solicitor General than any American in history[1].

Nearly all of those cases involved Marshall dismantling the laws of legalized discrimination and creating fairness of opportunities for all. 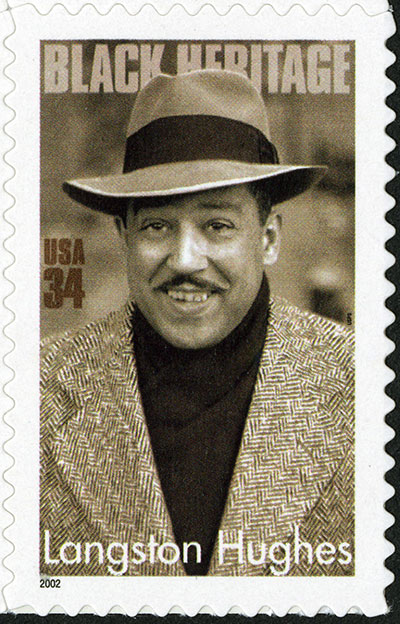 Marshall was born on July 2, 1908 in Baltimore, Maryland. In 1925 he enrolled at Lincoln University in Chester County, Pennsylvania. One of his classmates at Lincoln was the famous author, Langston Hughes.

Upon graduating Lincoln, he applied to the University of Maryland law school, only to be denied entrance because of his race. And so began Marshall’s crusade against the injustices disguised as “laws” that were all too common in America. 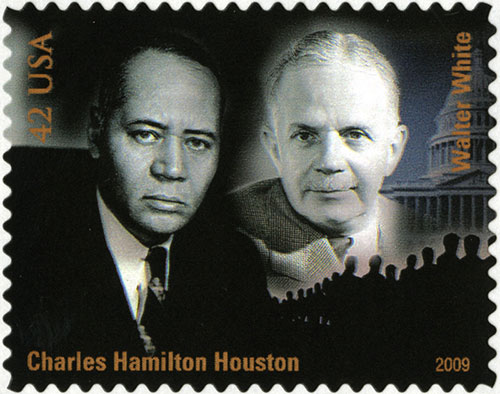 Marshall enrolled at the Howard University Law School where he forged a relationship with the dean of the institution, Charles Hamilton Houston (pictured at left in the 2009 42c Civil Rights Pioneer issue stamp with Walter White). Houston was a brilliant man who graduated from Harvard law and had dedicated himself to instructing a new generation of African American lawyers with the ability to attack and bring down segregation in America.[2] Thurgood Marshall was his star.

Marshall’s first case out of graduate school was a successful lawsuit leveled against the University of Maryland, this time for not admitting an African American named Donald Gaines Murray. [3] Marshall was just getting warmed up.

He followed Houston to New York to become a staff lawyer for the National Association for the Advancement of Colored People (NAACP). Four years later, he was named chief of the NAACP Legal Defense. 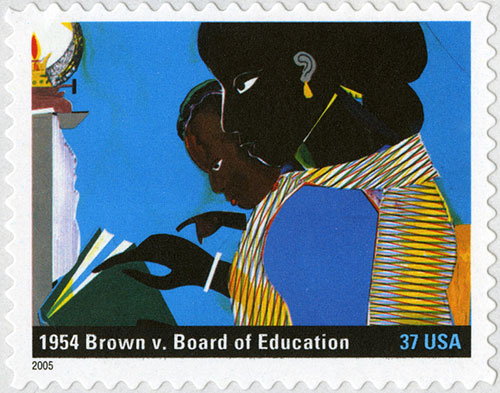 In this capacity, Marshall tore down state laws that denied African Americans the right to vote in primaries and provided for “separate but equal” facilities for African Americans at universities.[5] His crowning achievement was his work in the case Brown vs. the Board of Education of Topeka (commemorated in the 1954 37c stamp at right). Using arguments still studied in law schools today for their excellence, Marshall convinced the Supreme Court to rule that segregation was illegal and unconstitutional since it violated the 14th amendment. 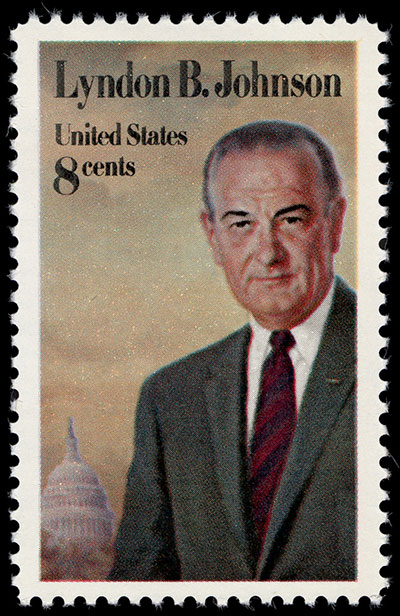 His tireless work in the courthouse championing the cause of those oppressed, sparked the American civil rights movement and garnered Marshall national attention. He was appointed to the US Court of Appeals by President John F. Kennedy in 1961. He worked his way up the federal legal system until President Lyndon B. Johnson (pictured at right in the 1973 8c stamp) appointed him to the Supreme Court on June 13, 1967.

Of appointing Marshall, the first African American to be appointed to the Supreme Court, Johnson said, “I believe it’s the right thing to do, the right time to do it, the right man, and the right place.”[6] Marshall was officially confirmed by a Senate vote on August 30th, 1967.

During his 24 years of service on the highest court in America, he never backed down from his ongoing battle with discrimination against all people who needed a voice to fight for them. Marshall served on the court until 1991 when he had to step down because of health issues. He passed away on January 24, 1993.

According to author Juan Williams, author of a Marshall biography, Thurgood Marshall did more to erase the color line in America than anyone in history, even moreso than Dr. Martin Luther King, Jr. and Malcolm X: “It was Thurgood Marshall, working through the courts to eradicate the legacy of slavery and destroying the racist segregation system of Jim Crow, who had an even more profound and lasting effect on race relations than either King or X.”[7] 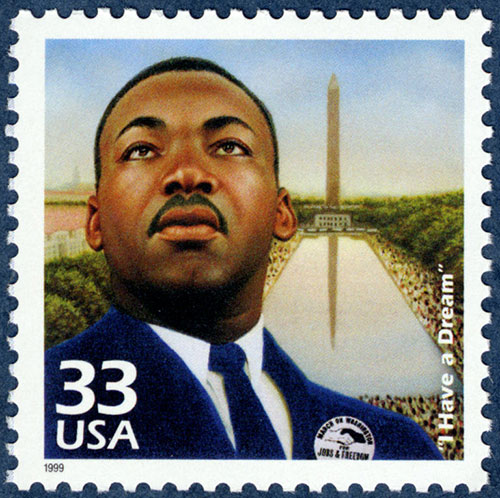 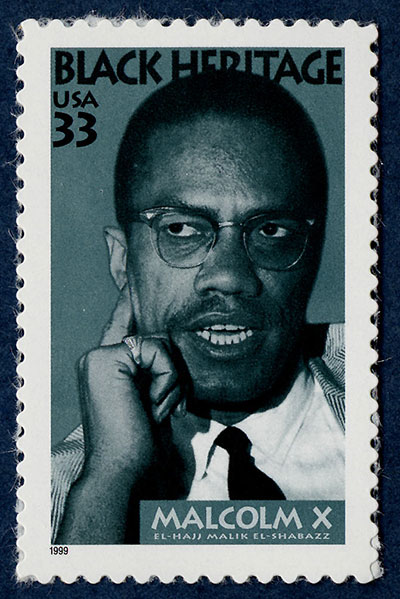 While King was captivating a nation through peaceful and passionate calls for equality and Malcolm X was stirring up black pride through fiery words and actions, Marshall could be found in a courthouse, rewriting laws that would open new doors for African Americans all over the country.