Preserving the Real Thing: An Interview with Owney the Dog’s Taxidermist

By Erin Blasco and MJ Meredith

One of the biggest things happening this summer at the Postal Museum is the much anticipated new exhibit and postage stamp issuance for Owney the Dog, mascot of the Railway Mail Service. As part of the exhibit, Owney is getting conservation treatment or what we’ve been referring to at the museum as his “makeover." 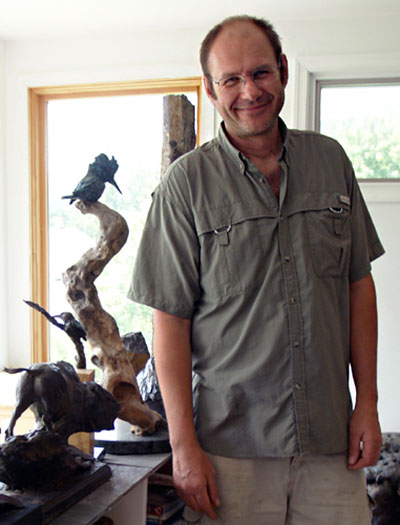 Taxidermist Paul Rhymer, who’s taking on the job of sprucing up Owney, answered a few questions about the process of treating such an unusual specimen. Rhymer recently retired from his job as taxidermist at the National Museum of Natural History to focus on his sculptural work.

Paul, how did you become interested in taxidermy?
My father was a taxidermist, so I’ve been around it all my life. When I first started at the Smithsonian I wanted to be an illustrator. An opportunity to do taxidermy and model making was there, I took it and never looked back.

It seems like taxidermists have to be familiar with many different subject areas and skill sets. What did you study in school?
I was an art major in college and drew and painted since childhood—that and doing some basic taxidermy in my father’s shop. I’ve always been interested in wildlife and the outdoors, like many taxidermists and wildlife artists. It all melds together. “Book learnin’” is good, but nothing beats experience.

You’re also a sculptor. How much do you find in common between taxidermy and sculpture? Would you call taxidermy an art?
Since taxidermy is 3D, it is essentially sculpture with natural animal products involved. The “Is taxidermy an art?” question is a matter of opinion and I’ll let folks decide for themselves.

Now, you have your own taxidermy shop, what’s the difference between working on a museum specimen and other specimens?

Taxidermy gives us the ability to see things close up that we’d never get to see in the wild.

What’s the oddest specimen you’ve ever worked on?
Check out the Mammal Hall at the National Museum of Natural History and you’ll see dozens of species that could answer this question. Orangutans, pink-fairy armadillos and vampire bats would make the list.

What do you think the value is in preserving “the real thing”?
People love the real thing. The world is full of visual stuff and films and special effects. Still most folks find taxidermy fascinating. Taxidermy gives us the ability to see things close up that we’d never get to see in the wild. Who will ever see an Okapi? Photos and nature shows don’t fill that experience. Back in the day, before cable TV’s ability to show us the wonders of the natural world, museums gave people their only opportunity to see these things. And they still have that same pull for people. 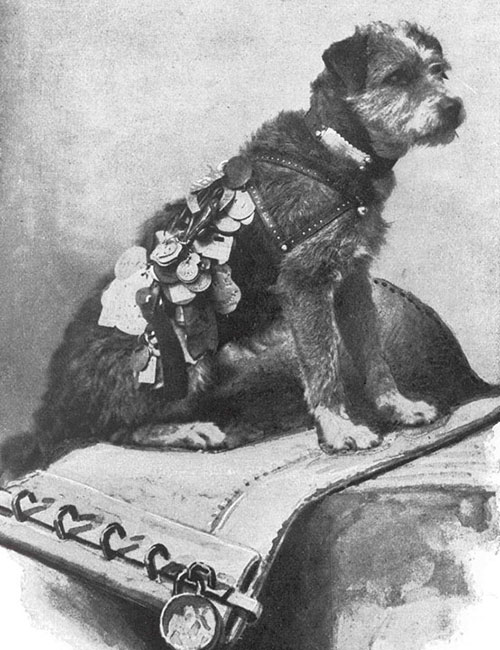 Is there additional pressure when you’re working on a recognizable creature vs. an exotic one?
Many taxidermists refuse to mount pets for this very reason. Also, there are many taxidermy forms for animals that sportsman regularly collect, but not for pets. So this type of preparation is very difficult and is very specialized.

Small animals vs. big ones: Which is most challenging?
This is different for different folks. But generally the bigger, the more difficult and more time consuming. But some taxidermists would happily mount a bison, but wouldn’t touch a hummingbird.

When you work on historic taxidermy pieces, how do you make decisions about improving their appearance vs. preserving their historic look?

The client has to decide if the mount is being restored or if we are trying to make it look better. The age and the techniques that were used on Owney will limit us quite a bit, but we’ve decided to try to make him look a bit better. We are also going to try to use techniques and materials that can be reversed so we don’t totally change the historical value of him; much of what I will do can be reversed if that is desired in the future. But the decision has to be made in the beginning, because it will affect to way the restoration is done.

Would you say the taxidermy job is typical for its era or somehow better or worse?
Given the ability of most taxidermists of that era, I would say that Owney’s prep was at least average to good. Despite the budget of the post office clerks at that time, it might have been very difficult to have a better job done on him without some advance planning, which wasn’t an option considering our little friends’ fate.

What’s on the inside of Owney?
Owney is literally stuffed with excelsior. Excelsior is like straw but made from shaved wood. It was once widely use as a packing material.

What kind of treatment will Owney undergo? Can you walk us through the steps? 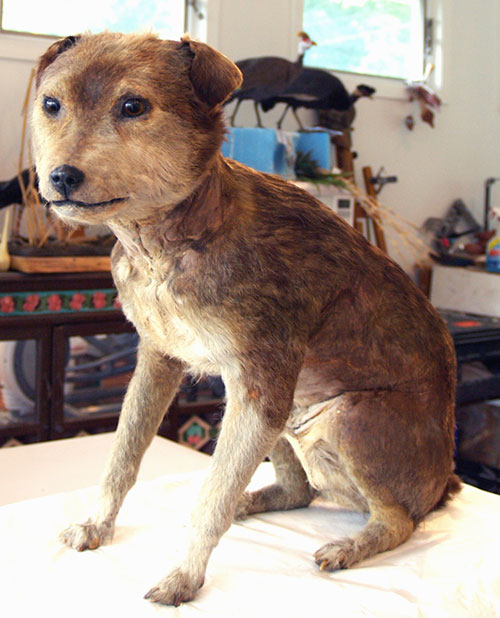 What will be the most challenging step in Owney’s makeover?
Replacing the missing hair will be the hardest thing. Making the facial features will be difficult, and I will only attempt to do some minor things due to the risk of further damage to him.

Owney wears a collar, a harness, and a little jacket. Have you ever worked on an animal that wore clothes before?
I did restore Stonewall Jackson’s horse, Little Sorrel. He wears a saddle and all the riding trimmings. It didn’t really affect what we did because we wanted him to look natural with or without his gear. It should be the same with Owney.

When you finish Owney, what project is next?
I have a big bear to mount. I’m sculpting a 1 ½ life-size bighorn sheep for the city of Tulsa and a bunch of other smaller models and sculptures to keep my summer and fall busy. I can safely say that Owney’s project is the most unique project I’ll have this summer.

Owney returns to the Postal Museum on July 27, 2011 for the opening of his new exhibit, issuance of his postage stamp, and a four-day family festival. Until then, stay tuned for updates from Rhymer’s studio, ongoing curatorial research on Owney’s history, and more. Have a question or want to wish Owney luck in his makeover? Check in with him on Facebook or Twitter.