This is the second in a series of posts highlighting the lives and work of the remarkable kings of the skies, the airmail pilots.

America’s regularly scheduled airmail service began on May 15, 1918 with a series of flights connecting Washington, DC, Philadelphia, Pennsylvania, and New York City. Pilots were required to keep the mail moving by air every day. In 1918, flying was still a difficult skill to master. Aircraft were flimsy and prone to breakdowns. While the Post Office Department had skilled mechanics stationed at its airfields, errors and weather could quickly challenge or ruin a flight, leaving mailbags far from their destination, airplanes in crumbled heaps, and pilots injured, or worse. 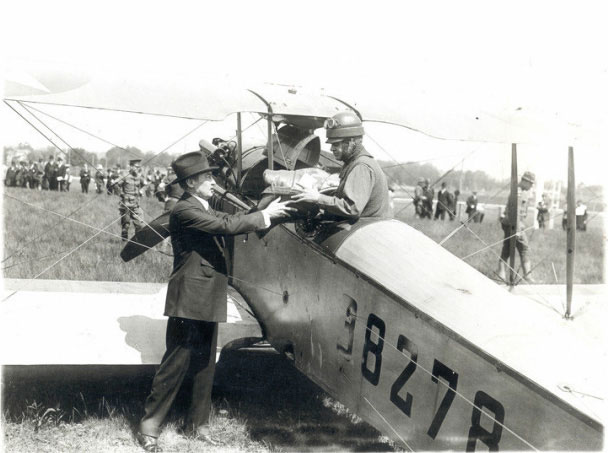 New York City Postmaster Thomas Patten handing Lt. Torrey Webb a bag of airmail letters for one of the first regularly scheduled airmail flights in the United States in 1918.

The first December of airmail service was rife with problems and challenges. Even aside from the disastrous attempt by Otto Praeger, the postal official in charge of the service, to add a route from New York to Chicago that month (read about that here), keeping the mail moving between Washington, Philadelphia, and New York on a regular basis could be challenging.

Pilots had to practice takeoffs and landings and even trail seasoned airmail pilots on their prospective routes before being entrusted with the US mail. Dan Davison was a young pilot in training that December. He had joined the service December 2, 1918 and spent the week training for his job. On December 7, he was trailing veteran pilot Maurice Newton from the Belmont Park, Long Island field to Elizabeth, New Jersey. After landing Newton sent Davison back to fly another airplane to the field. Davison left Belmont at 3:40 with 60 gallons of gas. According to a telegram sent to Praeger, Davison "arrived to the south of this field about 4 pm, passed onto the west and came back approached the field again and then headed south again going out of sight. About 4:50 I received a telephone from him that he was down at Grant City, Staten Island. Landing gear broken, propeller and two lower wings broken, radiator broken."

Davison’s defense was that he became confused flying over Staten Island and “while endeavoring to find fixed the air pressure on the main tank failed. . . it becoming necessary to land which I did at 4:40, on a golf link breaking landing gear and both lower wings, radiator and propeller." Davison’s skills did not improve, and by the first week of January he was removed from the service. 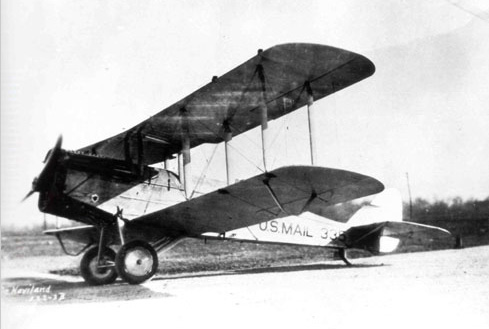 Side-view of a deHavilland DH-4 airplane

Less fortunate was airmail pilot Carl B. Smith. He had also joined the service on December 2. While test flying modified de Havilland airplane (DH-4) #39464, on December 16, 1918 Smith was killed when the airplane stalled midflight and fell into a tail spin. He died in a crash at the Standard Aviation field in Elizabeth, New Jersey. Smith was the first pilot killed in the US airmail service. Smith had been seated in the front cockpit between the mail cockpit and the engine and was crushed between the two in the crash. Smith’s death led to further modifications of the DH-4 airplane, moving the pilot’s seat to the rear of the mail cockpit. This modification was one of several that turned the failing de Havilland DH-4 (nicknamed “flaming coffin”) into the successful DH-4B (nicknamed “workhorse of the airmail service). 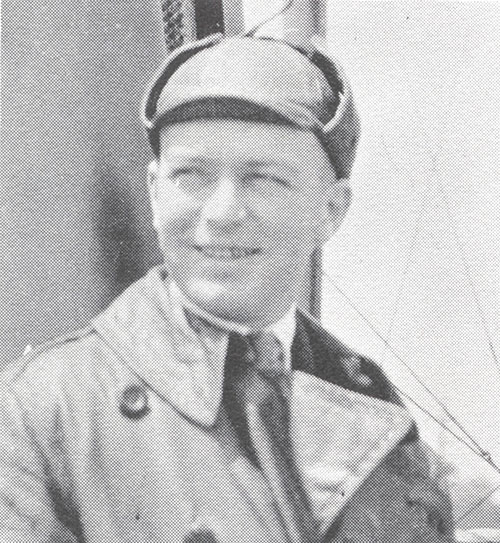 Airmail pilot Lyman Doty joined the service on December 6, 1918. On December 28 he was flying mail from New York to Philadelphia in an unmodified de Havilland DH-4. The engine began to miss over Brooklyn, so Doty turned to head back to the Belmont landing field. During the landing, a faulty axle gave way and the fuselage crumpled. Trapped in the front compartment, Doty was badly hurt and rushed to a hospital in Jamaica, New York and the mail was placed onto a train for Philadelphia. By the next summer, Doty was well enough to return to flying the mail, and did so. Sadly, the brave pilot was killed in an airmail crash the following October. Witnesses near Catonsville, Maryland, saw his airplane flying low in a thick fog. As they watched in horror, Doty's airplane hit the top of a tree and plunged to ground where the airplane turned over and caught fire.

Davison, Smith, and Doty were three of the more than 200 pilots who flew the mail as employees of the US Post Office Department from 1918-1927. Many of these men were able to transfer their skills into flying the mail for privately-0wned companies as the service transferred from Department-operated into contracts with private airlines.