This is the first in a series of three posts addressing the anthrax bioterrorism attacks that took place in October 2001. Click for parts two and three.

On October 2, 2001, with the nation still recovering from the 9/11 terrorist attacks, a Florida newspaper employee, Robert Stevens, was hospitalized and died three days later from inhalation anthrax. On November 21, 2001 New England native Ottilie Lundgren died from inhalation anthrax. The weeks between these deaths brought the nation face to face with a new fear that a common part of their daily routine – the mail – had turned deadly.

Twenty-two people were infected with spores from the anthrax letter attacks. The letters, addressed to government officials and members of the media, led to the infection of nine U.S. postal workers and the death of two. Before the end of that October, the American public had become frighteningly familiar with phrases like cross-contamination, bioterrorism, and the difference between inhalation and cutaneous (skin contact) infections. 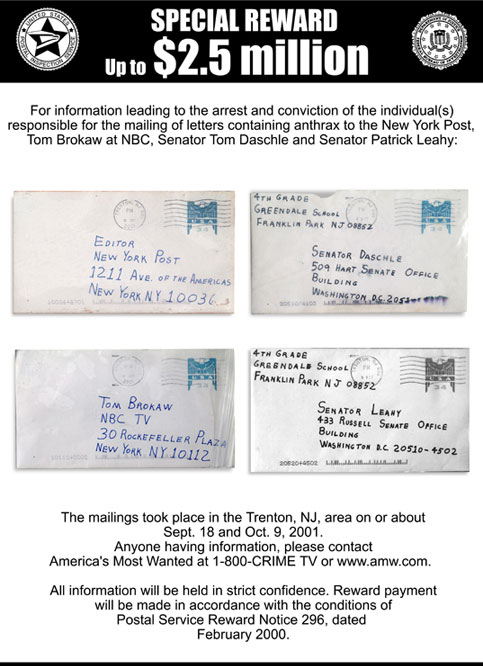 At first, authorities had no idea how or where Stevens had been contaminated. On October 8, US Attorney General John Ashcroft told reporters that they did not yet have enough information to say “whether or not this could be related to terrorism” or what he called “an occurrence.” The next day, the FBI took over the investigation and by October 11, after a second newspaper mailroom employee was found to have been exposed to anthrax, officials focused on the newspaper’s mailroom, and by extension, the mail.

The mail link drew national attention after an assistant to Tom Brokaw of NBC News tested positive for anthrax infection. She remembered that a threatening letter she opened two weeks earlier contained “a sandlike substance.”(1) Many began to approach their mail with extra caution. Herbert Bush of Flushing, New York began treating his mail literally with gloves, “I keep it at a distance and wear gloves definitely. I told my wife and daughter not to be too anxious to open anything.”(2)

Speculations flew over motives for the mailings; many feared they were a continuation of the 9/11 attacks. The fears were widespread. In Berlin, German Chancellor Gerhard Schroder’s office was sealed off after white powder leaked from a letter in the mailroom. Similar discoveries led to led 55 people being taken to hospitals in Paris, the evacuation of Canterbury Cathedral in London, the evacuation of Canada’s main Parliament building, and the closing of the international airport terminal in Vienna in the weeks following Stevens’ death.

Americans did not realize that because of the way mail moves through the mostly automated systems in postal facilities, the nation’s postal workers were on the front line of this particular terrorist attack. When the anthrax letters passed through sorting centers they were shaken, squeezed, and jostled by machinery that culled, cancelled, processed, and sorted them. Even after mail was identified as the anthrax source, officials were not concerned about postal workers.

Experts did not believe that anthrax particles could pass through a paper envelope. But the micron-sized particles did leak through. Not only did the pressure of the processing machines force spores into the open air, but the routine use of blowing air to clean machines and surrounding areas spread those spores even further. The spores that escaped the envelopes in sorting centers also found their way onto other envelopes in a cross-contamination scenario that was also unanticipated by field experts.

As the media followed the story, there were occasional references to potential dangers faced by postal workers, but the focus quickly returned to the letters’ targets in the media and U.S. government. On October 17, although the U.S. Capitol was shut down after employees in Senator Daschle’s office tested positive for exposure, the regional mail facilities remained operational.