Girl Scouting is a significant part of women’s history. More than 59 million American women participated in scouting during their childhood, including many prominent figures in fields ranging from acting to politics. No wonder that Girl Scouting is represented on commemorative postage stamps from around the world.

This summer’s Celebrate Scouting stamp issue, coinciding with the 100-year anniversary of the founding of the first American Girl Scout Troop in 1912, “pays tribute to scouting organizations for the opportunities and pleasures they have provided millions of youths worldwide,” according to Beyond the Perf.

On March 12, 1912, Juliette Gordon Low (featured on a 1948 stamp) organized 18 girls in her hometown of Savannah, GA, into what was initially known as a Girl Guide troop, reflecting Low’s inspiration by British scouting movement founder Robert Baden-Powell. Ever since, with a mission to “build girls of courage, confidence, and character, who make the world a better place,” the Girl Scouts of the United States of America has helped girls grow through enriching experiences including outdoor and community projects. The recognition of the organization on a stamp indicates American respect for and acceptance of scouting’s contribution to the nation.

For their 50th anniversary, the American Girl Scouts were issued their first commemorative stamp at the July 1962 Girl Scout Roundup in Button Bay, Vermont. Since the worldwide female scouting movement began in 1909, 25 other countries had previously pictured Girl Guides or Girl Scouts on stamps. 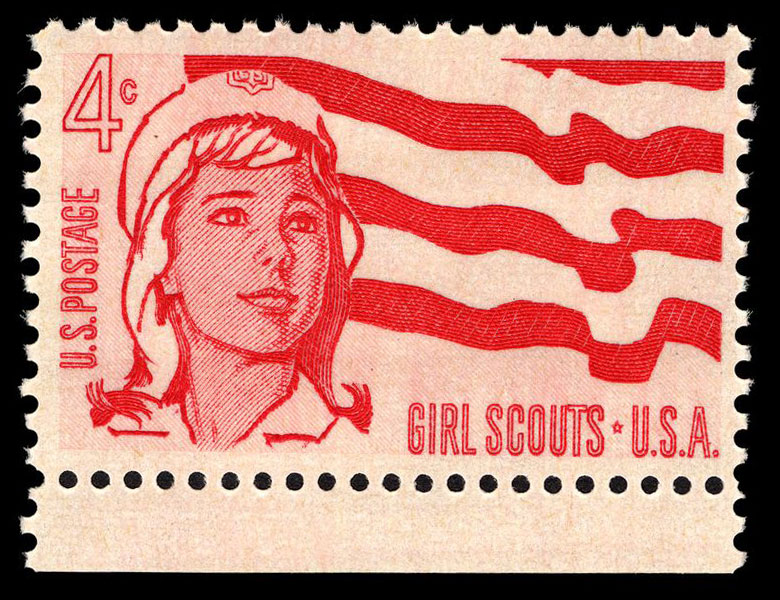 Postmaster General J. Edward Day announced the stamp issue, which would depict a senior Girl Scout in uniform in front of the red and white stripes of the American flag, at the March 12, 1962, 50th anniversary luncheon of the Girl Scouts. The stamp would “serve to re-awake and re-inforce…an appreciation of the great service American Girl Scouts have given to their community, their country, and the world,” said Postmaster General Day.

About 9,000 senior Girl Scouts from all over the country attended July’s Button Bay Roundup to celebrate the anniversary. At the dedication ceremony of the Girl Scout stamp on July 24, Judicial Officer of the Post Office Department Reva Beck Bosone (the highest ranking female in that office) addressed attending Girl Scouts as a “select group of womanhood” with an “unselfish devotion to an organization which has at its purpose the building of girls into good citizens.” “You are facing a world that is different from any that a new generation has faced before,” Bosone said, reminding the Girl Scouts of the exciting future that they faced as 1960s women. “The Space Age and all the scientific development…accompanied by elements of world devastation constitutes a challenge of huge proportions. Women, the mothers of men, must participate in this challenge.”

Bosone closed her speech noting that the commemorative stamp would serve as “an artistic daily reminder to millions of Americans both young and old of a great organization dedicated to living high ideals.”

Gloria Negri described the celebration as a “humdinger” in a follow-up article on the Button Bay Roundup in the Boston Globe titled “Girl Scouts Light 51 Candles—1 to Grow on—at Button Bay.” During the ceremony, a giant letter with the commemorative stamp issue adorned the stage, as well as a massive fake cake on which the scouts lit electric candles to honor Juliette Gordon Low and her 12 original scouts. The Girl Scouts sent letters with the stamp to the governors of all 50 states.

Mixed Opinions: Though many Girl Scouts and Americans alike were appreciative of the commemoration of the Girl Scouts with a stamp, as reflected in letters to the Post Office Department and the Postmaster General, the public’s response to the stamp was mixed. Curious individuals wondered why the stamp wasn’t printed in green, the Girl Scouts’ color, and why it didn’t highlight recognizable symbols of the scouts like the golden Trefoil. Others called the design and color choice “cheap” and “garish,” and a few went so far as to call upon the P.O. Department to reissue the stamp with a new design or color scheme, including one postal employee who wrote that the stamp could be confused with airmail issue stamps.

A handful of irritated postal customers were concerned that the stamp’s image and red color would beget communist associations. “It’s a pity, that such a beautiful stamp looks like a Russian stamp with a 'Komsomolec' (Communist Youth Organization) girl dressed in their red and white uniform,” Mecys M. Petrus wrote. “Isn’t it possible to direct those who design these stamps to emphasize U.S.A. with the good, clear, and strong colors despite whatever the stamps commemorate?” asked T. Marie Saline in September, 1962.

In response, the Post Office Department stated that there wasn’t enough time to produce the stamp in multicolor in order for it to be issued at the July Girl Scout Roundup. Because the stripes of the American flag predominated the background of the design, printing the stamp in red on white paper was the only “logical color choice,” the P.O. Department replied.

Though there was to be no reissue of the stamp, the Girl Scouts (as well as other youth organizations) have since been honored with a myriad of stamps. For the American organization’s 75th anniversary, a stamp was issued featuring 14 Girl Scout badges on a green background of the same color as the sash on which they’re worn. 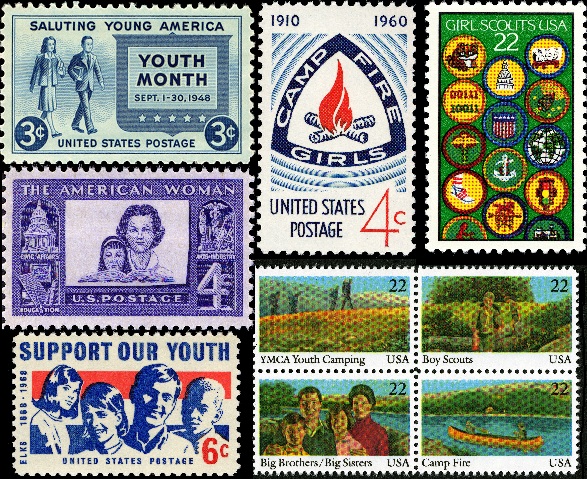 Prior to the 1962 Girl Scout stamp, founder Juliette Gordon Low had been featured on a stamp of her own (more information on the Juliette Gordon Low approved die proof). Known as “Daisy” to friends and family, Low was remembered as a charming, enthusiastic, and vivacious woman. She had previously founded Girl Guide troops in Scotland and London before bringing the concept to the United States. During World War I, membership in the scouts expanded dramatically. Low became an international leader and central figure of the American scouting movement; in 1915 she became president of the Girl Scouts of America, and was dedicated to her troops with constant enthusiasm until the end of her life.

Many Smithsonian programs, exhibits, self-guides, and other activities are planned for the Girl Scouts Rock the Mall. Check out other blog posts, the calendar of events, and more.