Stepping out of any professional postal museum curatorial role, I have compiled an only moderately arbitrary and completely personal list of the films I would call the 10 best movies with postal themes. Have you noticed how many films have postal themes in them? You will now! 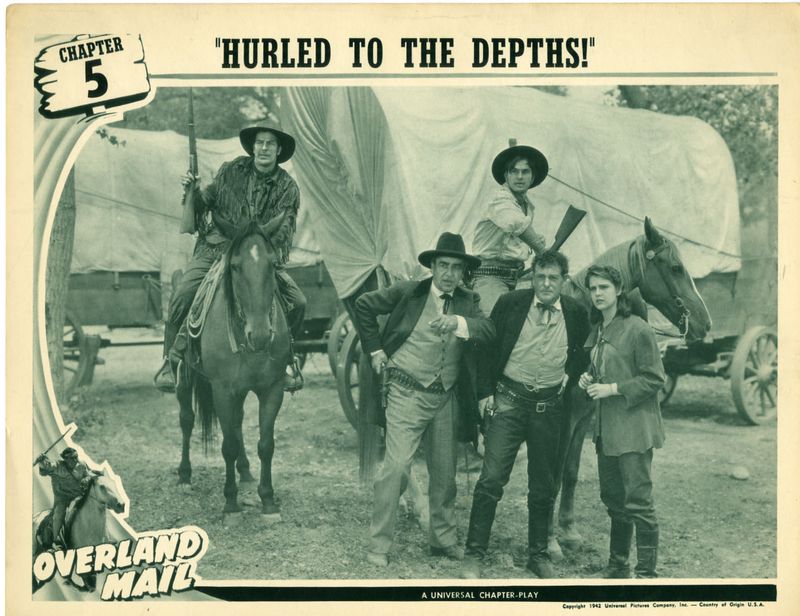 #10    Overland Mail (1942)
Technically not a movie, but instead a 15-chapter serial, “Overland Mail” told the story of stagecoach company men sent to investigate a series of robberies. The cast includes Lon Chaney Jr. (Jim Lane) and Noah Beery Jr. (Sierra Pete) as the investigators and Helen Parrish as the daughter of the company’s manager. The chapters range from the first, “A Race with Disaster,” to the happy ending of chapter 15, “The Mail Goes Through.” The agents discover that it was not Indians attacking the stages, but white men dressed as Indians, trying to disrupt the mail line. The serial also featured father and son actors Noah Beery and Noah Beery, Jr.

#9    Diva (1981)
This French film stars Wilhelmenia Fernandez as a Paris mail carrier. He lives an eclectic life and is devoted to opera. He secretly tapes an American diva at a concert. His tape is confused with one that ties a police chief to criminals. While the main character is a mail carrier, the postal system is not important to the film.

#8    Air Mail (1932)
Ralph Bellamy plays the owner and operator of an airmail operation. The film looks at the high risk careers of the nation’s early airmail pilots. The film also features Pat O’Brien in the roll of a young and boastful airmail pilot – a depiction that played to many Americans’ thoughts about these wild young (and possibly crazy) men. 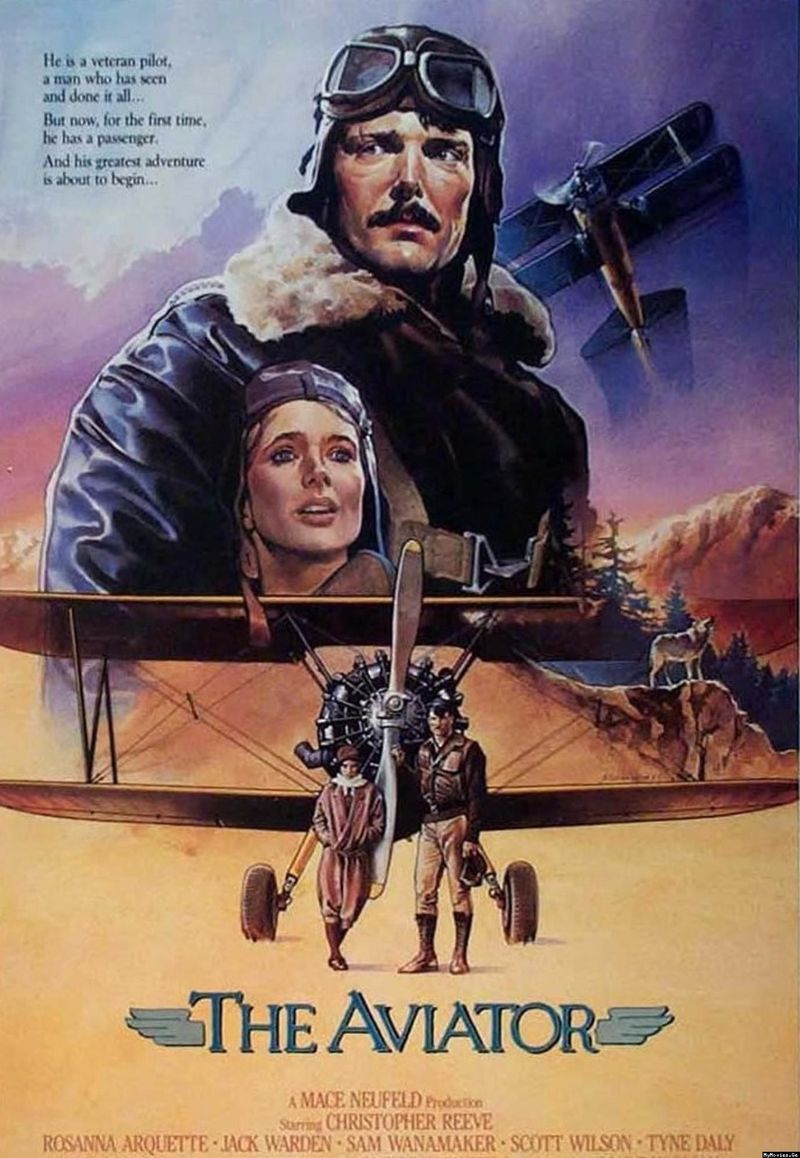 #7    The Aviator (1985)
Not to be confused with the more recent film about Howard Hughes, this film stars Christopher Reeve as an early US airmail pilot. He is flying as a contract pilot along CAM-5 (Contract Air Mail route #5) between Elko, Nevada, and Pasco, Washington. Although regulations and Reeve are only interested in carrying the mail, a rich man insists on his daughter (Rosanna Arquette) being carried as a passenger. Of course the pair fight, and are endangered when the plane crashes in a mountainous region. The pair survives the crash (and wolves) with a hint of a romantic future in the end.

#6    Only Angels Have Wings (1939)
Cary Grant plays a brave airmail pilot operating in South America, flying mail over the Andes mountains. Jean Arthur and Rita Hayworth make life more interesting (and challenging) for our pilots while they are on the ground. In a nod to real life, the plot revolves around the need for the company to secure a government mail contract in order to survive. In the United States, it was the airmail contracts of the late 1920s and early 1930s that allowed commercial aviation to grow and flourish.

#5    Dear God (1996)
Greg Kinnear plays con man Tom Turner in this late 20th century film. After his latest arrest the court sentences him to getting a real job Tom ends up working at the local post office’s Dead Letter Office where undeliverable mail ends up. He mistakenly sends money to someone who had addressed a letter plea “to God.” The accidental good deed inspires his co-workers, and finally even the con man himself. Before long the workers are doing all they can to answer the “Dear God” letters, helping people and of course, finding the good in themselves.

#4    Il Postino, i.e., The Postman (1994)
This amusing Italian film shares the story of an exiled poet who is befriended by a man who is hired as a letter carrier to deliver all the new extra mail following the poet to his new tiny island home. The poet becomes the young postman’s guide to expressing himself, and of course, helps him woo a young woman. 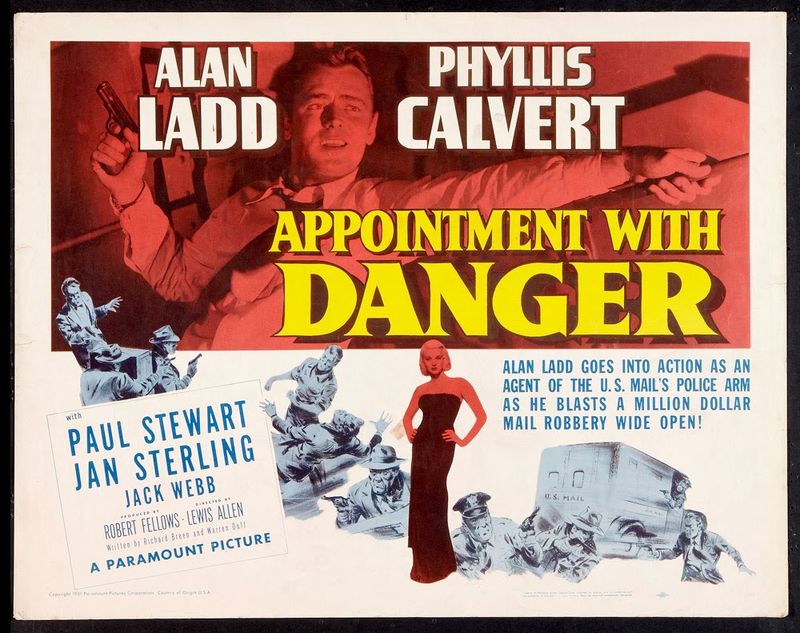 #3    Appointment with Danger (1951)
One of the few films featuring a US postal inspector hero, “Appointment with Danger” features Alan Ladd as inspector Al Goddard. When a fellow inspector is killed, he has to find and protect the witness, a nun played by Phyllis Calvert. Ladd also infiltrates the criminal gang responsible by pretending to be on the take. One of the amusing side notes of this film is the appearance of Jack Webb and Harry Morgan, later famous as the no-nonsense detectives in “Dragnet” as part of the criminal gang.

#2    Charade (1963)
If you haven’t seen this film, then you probably don’t know why it’s on this list. And the last thing I’m going to do is spoil that for you. So let’s just say that any movie that has Cary Grant and Audrey Hepburn in it is worth watching, regardless. And if there’s a connection to mail or the post, so much the better!

#1    Miracle on 34th Street (1947)
This quintessential Christmas movie is also a quintessential postal film. The film’s most dramatic point is when Kris Kringle is on trial and under pressure to admit that there is no such thing as Santa. But Santa’s cause is saved by the appearance of workers bearing sack after sack of letters addressed to Santa. His young lawyer argues that “every one of these letters is addressed to Santa Claus. The Post Office has delivered them. Therefore the Post Office Department, a branch of the Federal Government, recognizes this man Kris Kringle to be the one and only Santa Claus.” Faced with such overwhelming evidence, the judge has no choice but to admit that “since the United States Government declares this man to be Santa Claus, this court will not dispute it.”

Although not the topic of this blog, I could not end this blog without mentioning the worst postal movie of all time. It has to be Kevin Costner’s “The Postman.” In which an acclaimed science fiction novel is turned into a mush of a film.