When the Post Office Department began delivering mail to rural Americans as an experiment in 1896, the service was limited to selected routes in a handful of states. For the service to really prove useful, the Department wanted to organize it on a county-wide level.

On April 3, 1899, a specially designed vehicle that allowed two clerks to receive, postmark, sort and deliver mail set out from Westminster, Maryland. A third employee drove the wagon. The wagon was the first in the area, and was part of a plan to cover all of Carroll County, Maryland by Rural Free Delivery service. 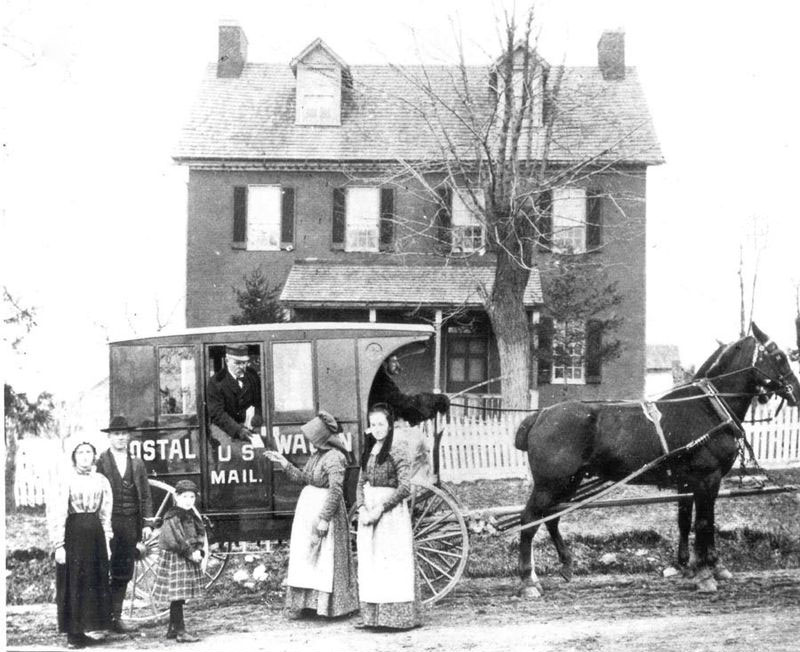 A family greets the new rural postal wagon on its journey in Carroll County, Maryland.

Carroll County was selected in part because it was the home of Edwin W. Shriver whose designs for were used as a base for the county-wide service. Shriver and his assistant, Horace G. Reese, set out on the morning of April 3, 1900 from the Westminster post office at 6:40 a.m. with the mail. The wagon was driven by Harry H. Harbough. The trio was followed by photographer Joseph H. Kritchen and postal officials in a carriage. Shriver’s delivery wagon traveled from Westminster to Warfieldsburg, Baile, Dennings, Crawford’s store, Taylorsville, Winfield, Gist, Klee’s Mill, Bird Hill, Smallwood, Fenby, and returned to Westminster, a twenty-mile round trip reaching 200 rural families. Patrons showed their enthusiasm for the service by gathering in crowds at spots along the route, offering standing ovations to the service at Crawford’s store and Winfield.

Westminster postmaster Milton Schaeffer gave the clerks 238 letters, six postcards, 261 newspapers and circulars, and five packages for the day’s run. While making their rounds, the clerks received three letters for delivery along their route and 36 letters, four postcards, two registry receipts, one money order, and two registered letters from patrons for processing at the local post office. The clerks stopped for a meal from 11am – noon at the Gist post office and still managed to return to Westminster’s post office by 3:30 p.m., two hours ahead of their scheduled time.