On January 1, 2013 at 9:00 A.M. the United States Postal Service (USPS) held the first- day ceremony for the Emancipation Proclamation commemorative forever stamp in the magnificent Rotunda Gallery of the National Archives.  The selection of January 1, 2013 as the first- day of issue was historically consistent as the date marked the 150th Anniversary of the signing of the Emancipation Proclamation by President Abraham Lincoln. Scheduling the first- day ceremony on New Year’s Day resulted in the stamp’s release on a Federal holiday, which is a rare event, but scheduling the first- day ceremony at the National Archives allowed this momentous event to become an integral part the 150th Anniversary celebration from Sunday, December 30-Tuesday, January 1.

A’Lelia Bundles, President of the Foundation for the National Archives, served as the Master Of Ceremonies. She recognized the importance of the ceremony to stamp collectors by asking how many people in the audience were stamp collectors, which resulted in a significant number of people raising their hands.  She used this occasion to pay homage to her own ancestors who were enslaved at the time the Emancipation Proclamation was signed. She also read a stirring proclamation issued from “another president,” President Obama, which commemorated the sesquicentennial anniversary of the signing.

Ms. Bundles was followed by David S. Ferriero, Archivist of the United States, who began his presentation by saying “Welcome to my house.” During his brief speech he cited the issuance of the Emancipation Proclamation as a document that added a moral dimension to the Civil War.

Ronald Stroman, the Deputy Postmaster General representing the USPS, gave the keynote address and spoke about the importance of the Emancipation Proclamation in changing the “arc of history” forever in America and the enduring significance the document holds in American history. “It is a legacy we choose not only to remember, but also to make our own.” The unveiling ceremony occurred after his brief remarks.

After the unveiling Dr. Bernice Johnson Reagon, who is a singer, composer, and founder of the a cappella group, Sweet Honey in the Rock, opened her presentation with a very brief but beautiful hymn. She followed with a dramatic reading of the original Emancipation Proclamation. The presentation closed with a stirring performance by the Washington Revels Jubilee Voices. The group enthralled the audience with spirituals and gospel music sung by African Americans during the Civil War period. At the conclusion of the ceremony, which lasted about 45 minutes, attendees were given the rare opportunity to view the original Emancipation Proclamation displayed in the East Rotunda Gallery. 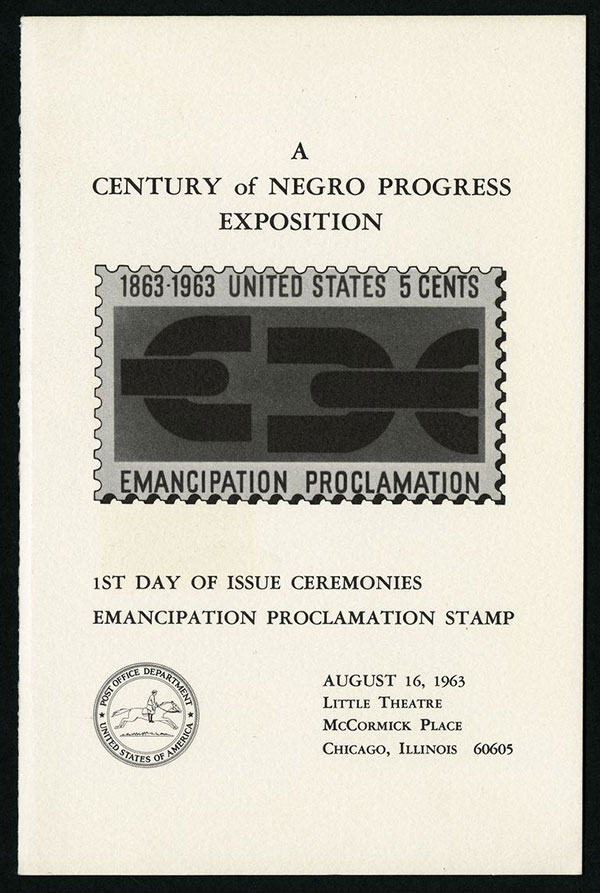 Program prepared for the first- day ceremony held on August 16, 1963 in Chicago, Illinois for the release of the stamp commemorating the 100th Anniversary of the Issuance of the Emancipation Proclamation. This stamp shown on the program was designed by Greg Olden, who was the first African American to design a US postal stamp. 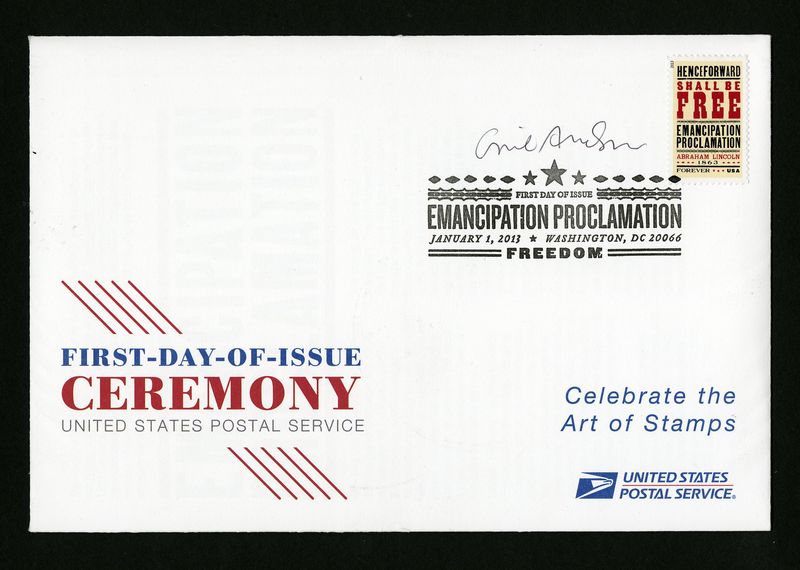 First- Day Program, signed by Gail Anderson, the stamp designer. Copies of the programs were found on the seats when attendees entered the Rotunda.

After the event the, USPS set- up shop in the National Archives’ Bookstore to sell philatelic products related to the stamp’s release and provide collectors with three different postmarks: a pictorial postmark, a bull’s eye postmark and a regular four bar first- day of issue postmark.   As usual, collectors will have to mail in items and pay (fifty cents per item) to receive the digital postmark.   Interestingly enough, a number of collectors actually had entire panes autographed by the stamp designer and postmarked at the Archives.  Moreover, sales at the postal service counter were very brisk. The postal service reported that attendees purchased $6000 of philatelic items.

Gail Anderson was spotted purchasing philatelic items from the postal service and was sought out for her autograph, which she gladly provided upon request. 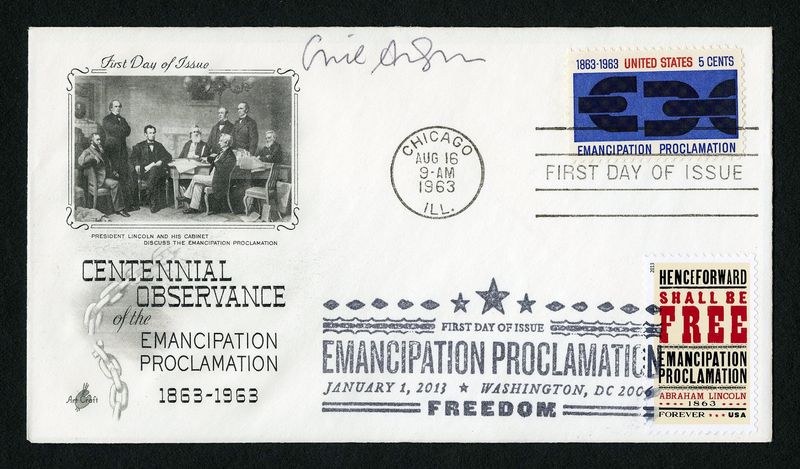 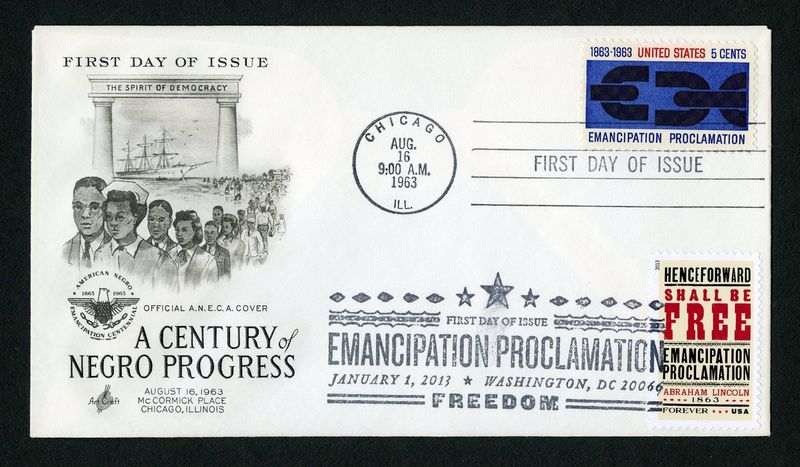 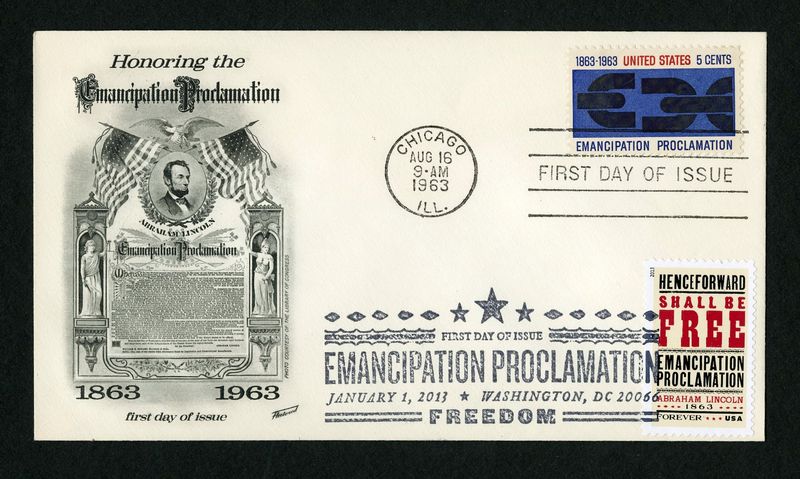 Set of three Artcraft covers (above) prepared for the issuance of the 1963 Emancipation Proclamation Stamp I used to obtain the pictorial postmark designed for the issuance of the 150th Anniversary Stamp. I had the stamp designer for the 150th Anniversary Stamp autograph the cover. Note the two varieties in the circular postmarks used on the 1963 centennial stamp.

First day cover sold at the ceremony by the USPS and autographed by the stamp designer.