U.S. Postage and the Beatles: The 1999 Stamp, the 2003 Proofs and Future Expectations 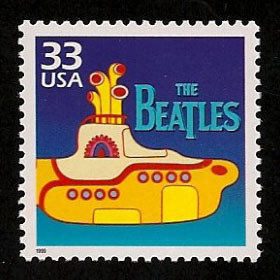 Fifty years ago the Beatles invaded America with a musical sound and style that permanently influenced American music. Yet their transformative sound was influenced by a variety of distinctly American musical styles, such as Rhythm and Blues, Rock and Roll, and Country and Western. As a consequence of their of influence and popularity, the USPS issued a Beatles stamp as part of the 1960s Celebrate the Century (CTC) commemorative pane issued on September 17, 1999 in Green Bay, Wisconsin (and ,incidentally, the stamp design had been unveiled at a special unveiling ceremony in Liverpool, England on August 31,1999). The stamp topics selected for the CTC series were voted on by the general public, and the Beatles stamp was ranked sixth in the 1960s CTC series. (Public voting on CTC stamp topics began with the 1950 series.) The stamp was inspired by a song of the same name first released on the Beatles’ 1966 Revolver album. Carl Herrman, the stamp’s art director, hired Robin Shepard, an animator for the 1968 cartoon film the Yellow Submarine, to design the stamp’s artwork.

Robin Shepard’s stamp design was based on designs created by Heinz Edelman, a noted Czech artist and graphic arts designer, who worked with Shepard on The Yellow Submarine movie. Carl Herrman gave the blue background a dark to light gradation (above).

In 2003 the Citizen’s Stamp Advisory Committee (CSAC) expressed an interest in exploring stamps that could be released as a joint issue with England. These stamps would focus on topics that reflected the shared historical and cultural experiences between both nations. However, the joint issue was never approved and the design development never went beyond the preliminary proof phase. As part of this exploratory design effort, Carl Herrman designed several proofs focusing on eleven songs in the Beatles discography that were distinctly American (Honky Tonk Blues, Wabash Cannonball, Carolina Moon, Kansas City and Memphis, Tennessee); influenced by American music styles (Rocky Raccoon, a country and western- inspired ballad and Yer Blues, a blues oriented song ); or based on their experiences while playing or living in America (Blue Jay Way, Get Back, Honey Pie and Bungalow Bill). 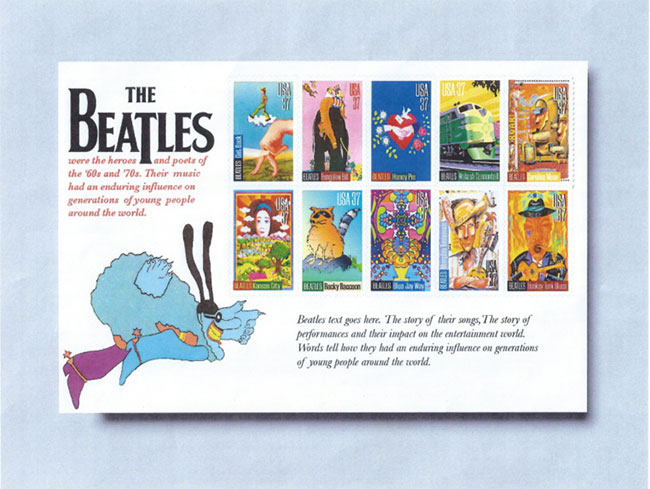 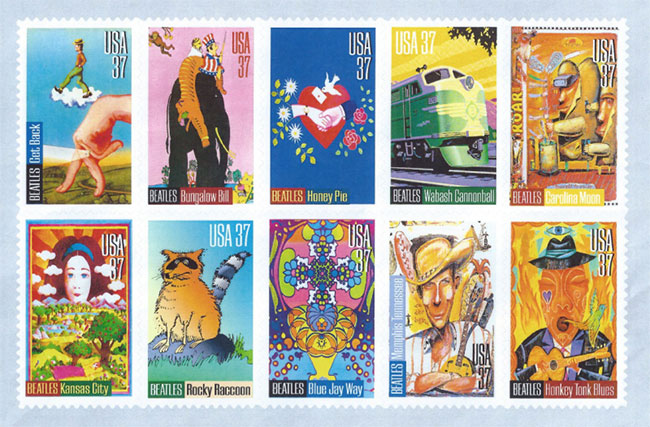 Proofs 2 and 3 (above) were based on artwork previously released or by artists inspired by the Beatles’ music. Four of the Beatles’ songs (Honey Pie, Bungalow Bill, Rocky Raccoon and Yer Blues) selected for stamp designs that appeared on the Beatles’ White Album released in 1968. With the exception of the song Get Back (which had a drug oriented theme, and was recorded with Billy Preston, an American, on electric keyboards), most of the stamp designs were for songs not regarded as commercial successes. 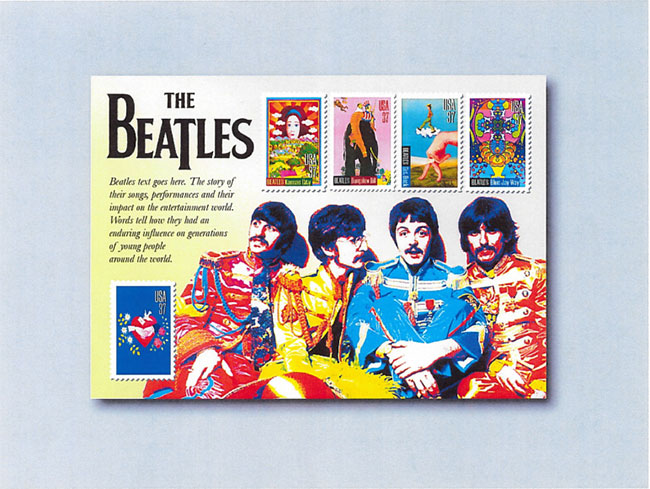 Given the 2003 policy of the CSAC and the USPS regarding the appearance of living people and non-Americans on US stamps, it is certain that this pane would have experienced further revisions. The Beetles portrait shown in Figure 4 was based on a photograph taken by the noted photographer Micheal Cooper, who provided the photographs used on the seminal cover designed for the Sgt Pepper album. 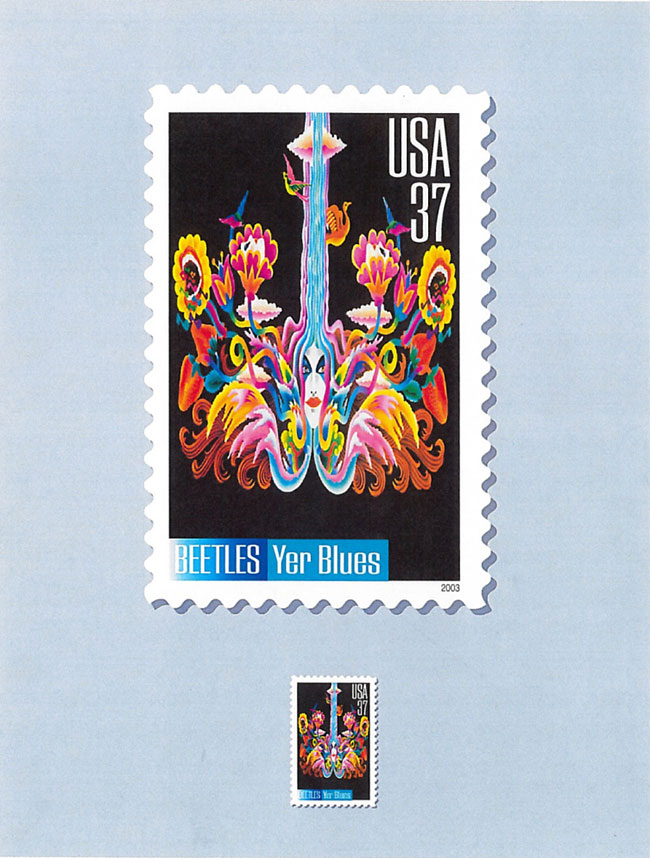 Figure 5 (above) is a proof for the Yer Blues stamp not included as part of the 10 stamp pane proofs. The design is based on artwork created by Alan Aldridge, an English graphic art designer, who authored the lavishly illustrated book “The Beatles: Illustrated Lyrics." 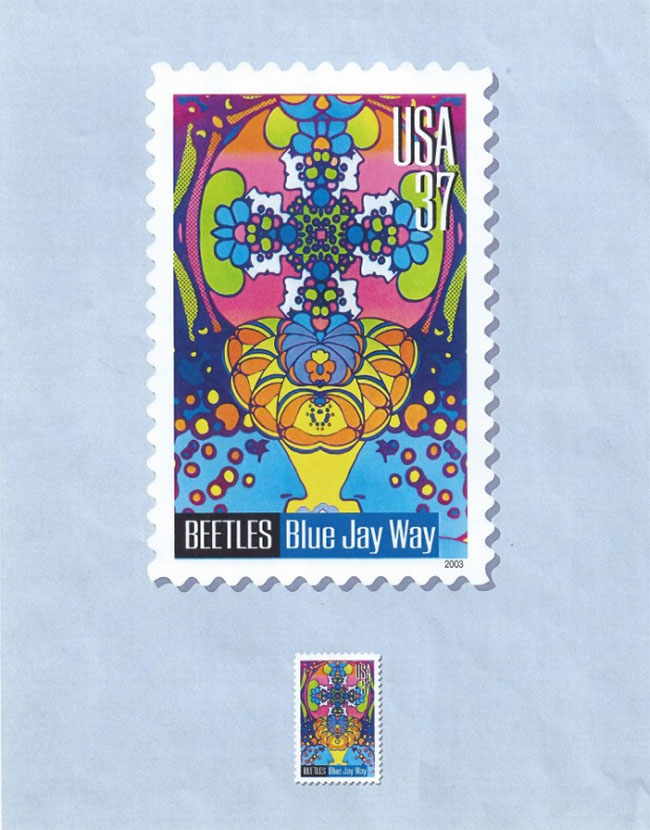 Note the “Beetles” spelling on these proofs. The proof for Figure 6 (above) was based on a Peter Max- inspired design used by Herrman when he prepared preliminary designs for the Yellow Submarine Stamp. Figure 7 (below) was based on artwork prepared by Seymour Chwast, an American graphic designer, and inspired by a song whose controversial lyrics were loosely based on true events that happened in India. 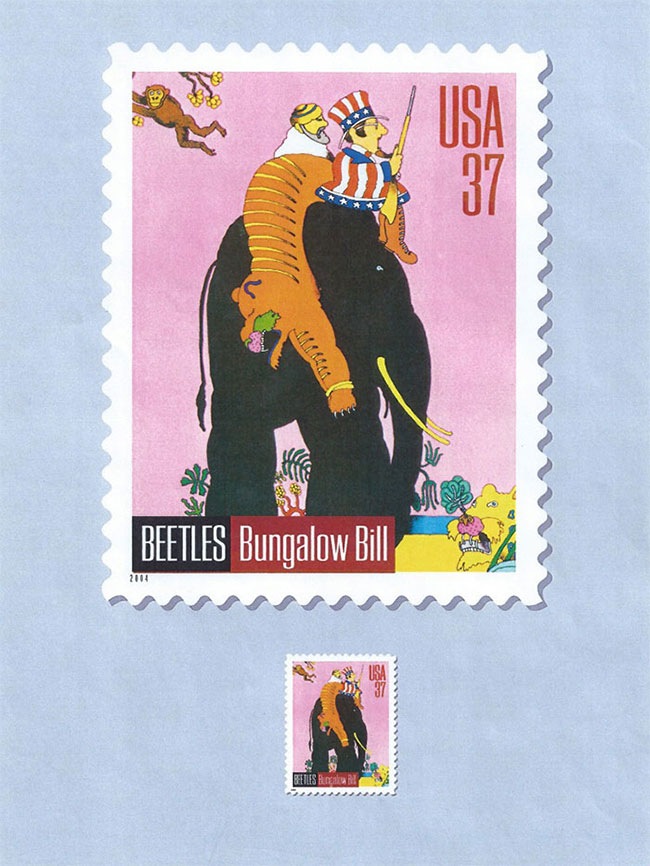 Recently, CSAC and The Postmaster General have revised criteria used to determine subjects to be honored on US postage. These changes have allowed the USPS to honor subjects—such as the Harry Potter movie series—that would have been unthinkable a few years ago. The USPS is considering a stamp commemorating the life of John Lennon. A stamp for John Lennon would be quite appropriate given that his comtempories such as Jimmie Hendrix has been honored with a stamp and Janis Joplin is scheduled to be commemorated on a stamp later this year. The approval of John Lennon for a commemorative stamp would signify the Postal Service continuing acknowledgement of the enduring influence the Beatles had on American Popular Music.