Parrish was a firm believer that pilot training should be based on individual merit and not racial stereotypes. He was a strong believer in the popular saying of the wartime Army Air Force: “There’s a right way, the wrong way and the Army way.” And Parrish believed in the standards of the third way.

Under his leadership many TAAF facilities were desegregated, and he created an environment that allowed the cadets to feel comfortable in settings outside the classroom. For example, major African American entertainers, such as Lena Horne, The Ink Spots and Count Basie came to the base to perform for base personnel in integrated settings. 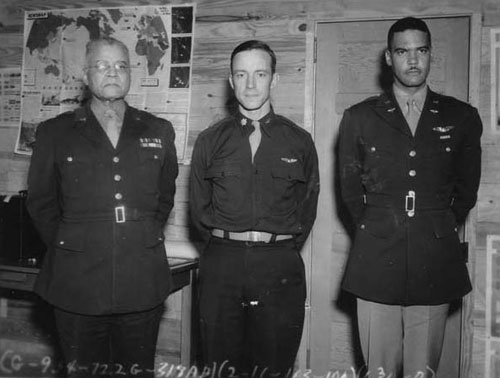 Photograph of Lt.Col. Parrish (center) standing with Brigadier General B.O. Davis (left side), the nation’s first African American one star general ,and B.O. Davis Jr (right side), one of the first graduates of the training class at the TAAF and the only Tuskegee Airmen to be awarded the Silver Star during World War II. He became the first African American general officer in the Air Force, and later received his fourth star in 1998—28 years after he retired from the US Air Force. Source: U.S. Air Force Historical Research Agency.

Parrish received his initial Army Aviation training at March Field in Riverside, California. Prior to becoming commander of TAAF, Parrish was a highly qualified pilot who had been a flight instructor at Randolph Field, Texas, and an assistant director of training of the Eastern Flying Training Command at Maxwell Field, Alabama. 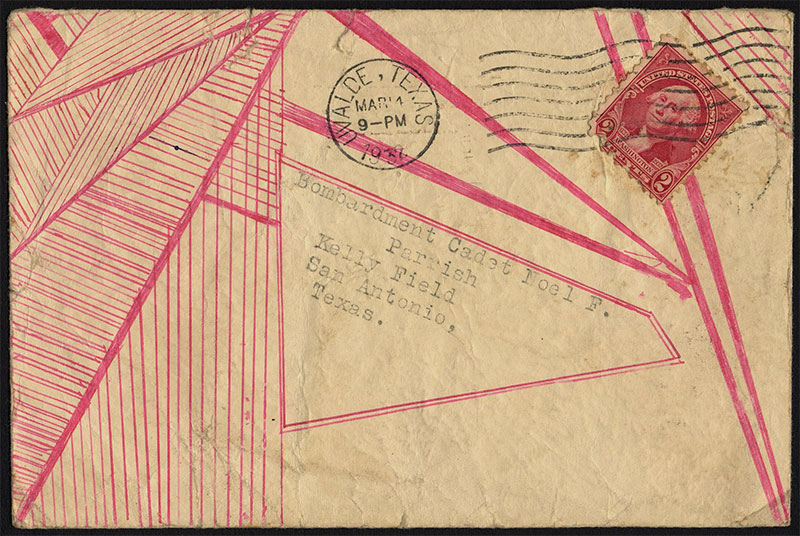 A cover identifying Parrish as a cadet. He was selected as an aviation cadet on July 1, 1931 at March Field. Although he entered the Army Air Force as an enlisted man, he received his commission as a second lieutenant in the regular Army in July 1935. Source: National Postal Museum.

Assuming the role of director of training at TAAF on December 5, 1941, just two days before Pearl Harbor, Parish could easily have accepted a transfer to the European Theater of Operations (ETO) to command a white combat squadron with opportunities for career advancement. Instead he remained at Tuskegee to command an Army airfield that trained young African American males to fly and maintain combat aircraft.  As training director at TAAF, he oversaw the military training program at Moton Airfield where Alfred “Chief” Anderson oversaw the primary training program and who became the most celebrated African American flight instructor during the World War II era. 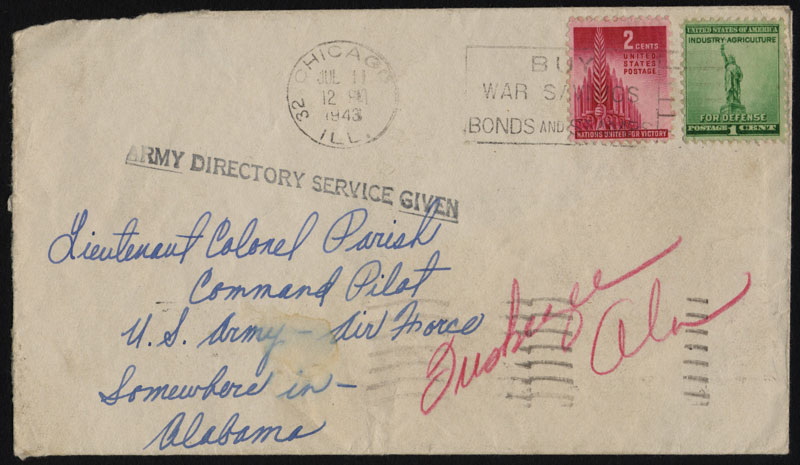 Cover written to LTC Parrish, stationed “Somewhere in Alabama”, while he was commander of TAAF. The postal clerk determined through the Army Directory Service that Parish was stationed at Tuskegee, and by the postmark date, Parrish was already a full Colonel. Source: National Postal Museum.

During his tenure at Tuskegee 992 African American pilots were trained and 96 Distinguished Flying Crosses and three Distinguished Unit Citations were awarded to the Tuskegee Airmen who flew in the ETO.

After leaving TAAF in 1946, Parrish was selected to attend the inaugural class of the Air Command and Staff College. Because of his experience with the irrationality of racism—in the military and the South--he devoted his thesis research to racial discrimination’s influence on the training, readiness and morale of the Army Air Force. In his lengthy and widely-read thesis, “The Segregation of Negroes in the Army Air Force, “ he wrote the following conclusion: “In the administration of segregated units there is no routine. There can be no consistent segregation of policy not because it was immoral but because it was wasteful and impossible to implement logically and consistently.” In 1946 he also testified before the Pentagon’s Board on Utilization of Negro Manpower, which made recommendations regarding integration initiatives for the Armed Forces, that racial integration should be fully implemented in the Armed Forces. 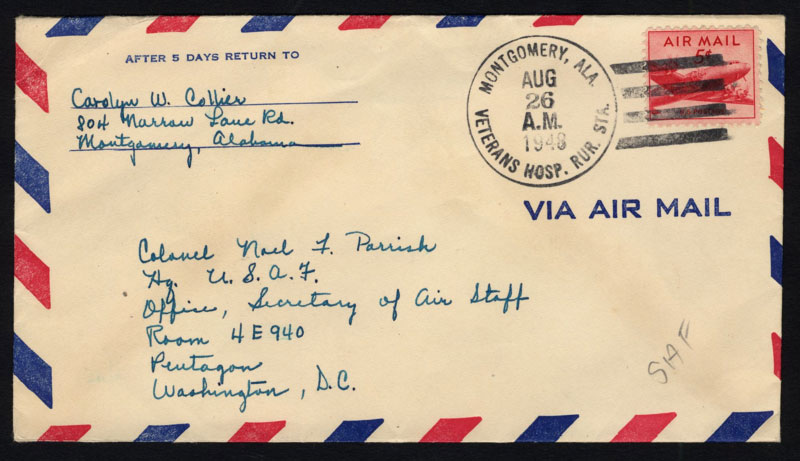 After graduating from the Air War College at Maxwell Field in June 1948, Parrish became deputy secretary of the Air Staff located at the Pentagon. This letter was postmarked at the Veterans Hospital in Montgomery Alabama. Source: National Postal Museum.

The exemplary accomplishments of the Tuskegee Airmen during World War II contributed to the successful issuance of Executive Order 9981 on July 26, 1948 which ushered in the integration of America’s Armed Forces, especially the newly created US Air Force.

He continued to advance in his military career by assuming several significant staff and command positions and wrote several publications related to the newly created Air Force. He retired from the Air Force on October 1, 1964 as a Brigadier General and a command pilot. During his retirement he earned master’s and doctorate degrees in history from Rice University. He then taught history at a Texas college.

This is a cover addressed to Parrish after he was promoted to Brigadier General. He returned to Maxwell Air Force Base to head the Research Studies Institute. The postmark on this letter was dated March 10, 1964, several months before he retired from the US Air Force. Source: National Postal Museum.

Noel Parish died on April 7, 1987 at the age of 77. His burial at the Arlington National Cemetery was attended by more than 100 former Tuskegee Airmen—many of whom wore the crimson blazers of the Tuskegee Airmen Association Incorporated (TAI)—a final tribute to a commander who helped train the Tuskegee Airmen.