Charles Ames was born on February 2, 1894 in Jackson, Michigan. By the time he signed on with the U.S. Airmail Service on December 8, 1920 he already had more than 700 hours in the air.

Ames was a steady and reliable pilot who had his share of forced landings, including a particularly frightening one on September 26, 1922. While flight testing a de Havilland airplane out of Hazelhurst Field, New York, Ames reported that "the con rod in cylinder number four, right, broke, one piece going through the crank case and starting the motor on fire while in the air." Flying over Westbury, New York, at the time, Ames responded well to the crisis. "After cutting motor and turning on pressure pyrene tank [fire extinguisher], I landed the ship ok in plowed rolling field and tried to put out fire with my hand pyrene, which was impossible. When the flames reached center section and gravity tank I left ship which burned to the ground."

On July 3, 1924, Ames was flying the last leg of the airmail from San Francisco to New York City when he arrived there seven minutes ahead of schedule in spite of raging thunderstorms across Central Pennsylvania. But the storms were nothing to Ames, as the New York Times quoted him saying “Air mail pilots expect to encounter heavy thunderstorms during most of their trips at this time of year.”

Ames’ luck ran out on October 1, 1925. He was flying a de Havilland mail plane over the mountains near Bellefonte, Pennsylvania, on the New York to Cleveland run. Bellefonte was the first stop, flying west, on the route. That leg of the trip usually took about two hours to fly. Ames had left Hadley Field, New Brunswick (the eastern terminus of the coast to coast service) at 9:40 p.m. This was part of the day and night airmail service that carried mail from coast to coast. The watchman at Hartleton, Pennsylvania, an emergency airmail landing field twenty miles east of Bellefonte, reported he heard the airplane flying overhead at 11:35 that night. That was the last report of Ames and his plane. At first airmail officials thought that Ames had probably made a forced landing and would contact them by telephone, as required. When no word was heard from him by the next morning, a search was organized for the missing flyer.

Headline from the Atlanta Constitution, October 4, 1925

The search for Ames and his airplane took several days and was the focus of attention across the northeast. On October 6, a reporter for the Washington Post working out of nearby Clarion, Pennsylvania, updated readers on the search. "Practically all the activities in connection with the search for Charles H. Ames, air mail pilot, missing since Thursday night, were shifted to Clarion tonight after another fruitless day's work by the hundreds of volunteers on foot and a dozen Government aviators engaged in the hunt. About 300 members of the Pennsylvania National Guard, mobilized at the request of Gov. Pinchot, arrived here tonight and will join in the search tomorrow.”

For the next few days a dozen aircraft flew back and forth over the suspected crash zone while nearly a thousand volunteers tramped through the ravines and underbrush below. The Pilots’ Association of America offered a $500 reward for finding Ames, an amount doubled by other pilots and friends of the pilot.

Their worst fears were realized on October 11 when 15-year-old Harry Dobson discovered the wreck. Ames’ body was found still strapped inside his downed airplane. Ames had apparently been flying low, possibly becoming lost in a dense fog and had crashed through trees into the north side of a ridge in the Nittany Mountains. Ames had been killed on impact. The airplanes' wings had been destroyed when it crashed into the trees. The trees were so close that they covered the ship, which had made it almost impossible to locate. Ames was the first (though sadly not the last) casualty of the day and night airmail service connecting New York City and San Francisco. Years later a monument to Ames was erected by a local resident, Daniel Lucas, at the site of the crash: “Charles H. Ames, U.S. Air Mail Service Crashed Here October 1, 1925.” 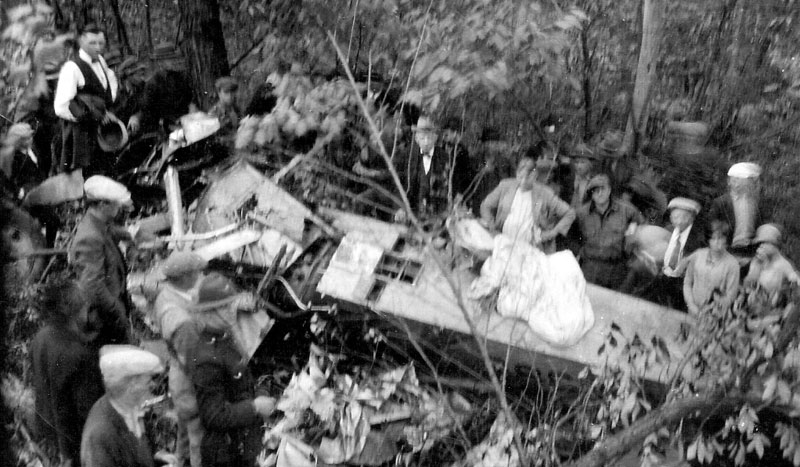 A crowd surrounding the wreckage of Ames’ aircraft.