Sinking of the “Central America” – and its Rebirth

On September 12, 1857 mail steamer “Central America” sunk off the coast of South Carolina after being caught in a hurricane. More than 450 people died when the ship sank. But what keeps the “Central America” (originally named the “S.S. George Law”) in the nation’s consciousness is not the loss of life, but the loss of cargo. In addition to tons of mail heading from California to New York the ship carried tons of gold from the California gold fields.

A half century before the Panama Canal was built, people and cargo headed from the West to East coast of the United States had to disembark in Panama (or Nicaragua) and make the overland crossing to the opposite side of the Isthmus where they would board another steamer to finish the journey. The “Central America” picked up its passengers and crew members from Aspinwall (later renamed Colon), Panama on September 3 and headed for New York City. The ship stopped for the night of September 7 at Havana, Cuba, leaving the next morning to continue the journey with 562 people on board.

The ship, trapped and damaged in the hurricane, managed to unload 150 passengers to ships in the area that had managed to survive the storm. The “Central America” had placed its flat at half-mast and fired a gun, gaining the attention of the bark “Marine” out of Boston. Women and children were loaded into a trio of boats and sent over to the “Marine” which could not stay in the area due to storm damage. One survivor, R.T. Brown of New York, was interviewed by the “New York Tribune.” After a wave knocked him into the sea, he noted that “When I came up and had freed my eyes from water so as to look around, the steamer had disappeared. The sea was literally covered with human beings and floating objects. … I succeeded in getting on a piece of the hurricane deck. …This was about 8 o’clock in the evening. We remained there all night, tossed about … On the morning of Sunday we saw a sail, and succeeded in attracting attention. At 8 o’clock we were picked up by the Norwegian bark “Ellen.” Three more people survived over a week on a lifeboat before rescue. 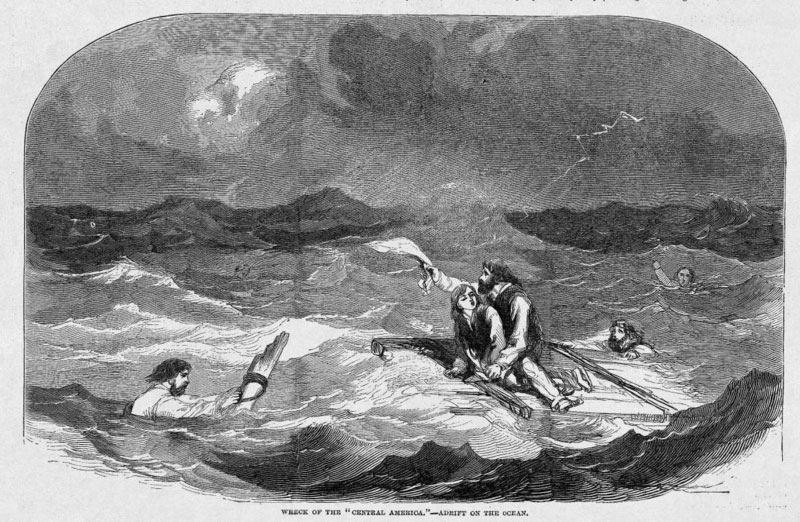 The survivors were cheered and celebrated in the news, but as decades went by, attention switched from survivors to the treasure still in the ship’s cargo holds. Newspapers were filled with survivors relating incidents of men tossing gold they had on them onto the deck of the ship, lest it weigh them down if they were to go overboard. Gold was more than worthless, it was a hindrance to survival. But later, as the ship lay at the bottom of the sea, the gold became all some could think of. And many plotted ways to recover the treasure.

In 1988, a group recovered large amounts of gold as well as artifacts from the ship. And a new drama began in the life of the “Central America.” The recovery group, “Columbus-America Discovery Group,” was led by Tommy Thompson. Thompson had located the ship the year before, 160 miles off the South Carolina coast, a find that was due in large part to funds poured into the Discovery Group by a number of investors.

Not long after Thompson brought up the first batch of gold, a group of American and British companies claimed in a suit that since their companies had insured the ship’s cargo in 1857, the treasure was theirs. In 1993 the insurance companies were awarded seven percent of the recovered gold. That was only the beginning of Thompson’s legal difficulties. Thompson was also sued by investors who claimed that in spite of all the gold that had been recovered and sold (Thompson apparently sold gold bars and coins to a marketing company for $50 million in 2000) they hadn’t received anything in return for their original investments.

In a dramatic move, Thompson failed to show up in court, going into hiding with his girlfriend in 2012. They managed to stay a step ahead of the law until January 2015 when they were discovered in Florida with almost half a million dollars in cash and a book titled “How to be Invisible.” Thompson pled guilty and agreed to help those suing him recover assets from the wreck as well as turn over the cash that was on him when he was arrested. As of the writing of this blog he has not been sentenced, but the most he would receive is two years in prison.

After Thompson’s disappearance, courts named Odyssey Marine Exploration as “salvor-in-possession” to be responsible for continuing salvage on the ship. Odyssey is funded by Recovery Limited Partnership (RIP). Between March and April 2014 Odyssey recovered 15,500 gold and silver coins and 45 gold bars. Odyssey keeps the public informed on the process of their recovery at: shipwreck.net. Without a doubt the drama of the “Central America” is far from over.;