Sunday was Ben Franklin’s 310th birthday. He was born on January 17, 1706 in Boston. While others may celebrate the man for flying a kite in a thunderstorm or advocating the turkey as a national symbol (1), the Postal Museum celebrates his many contributions to postal history while he served as postmaster general under both the British crown and the Continental Congress of the fledgling United States.

Franklin’s postal career began after he moved to Philadelphia. There, he caught the attention of Col. Spotswood, the British

Postmaster General who was looking to replace Philadelphia’s current postmaster, Andrew Bradford. Spotswood named the 31-year-old Franklin to the post in 1737. His work impressed the British enough that in 1753 he was named co-Deputy Postmaster General with William Hunter. After a 1,600-mile inspection of post offices, he organized a weekly mail wagon between Philadelphia and Boston. Franklin's postal riders traveled day and night by horseback in relays, using lanterns to light their way.

Benjamin Franklin helped create the first rate chart used by colonial postmasters. The chart converted postage charges from British to colonial currency. Under Franklin, mail delivery time between cities was cut in half, making the colonial post both efficient for colonists and profitable for the Crown. But profits weren’t everything and Franklin’s revolutionary writings earned him a dismissal in 1774. Ben wasn’t out of a job for long. The very next year, the Continental Congress appointed him as postmaster general of the United Colonies at an annual salary of $1,000. Franklin’s duties to colonies took him elsewhere and he left postal work for good in 1776.

While we tend to think of Franklin as the nation’s first postmaster general, Samuel Osgood was the first postmaster general of the United States, appointed on September 26, 1789 by George Washington. Franklin’s position has long been celebrated on U.S. stamps, including the first stamps issued in 1847 (one depicted Franklin, the other Washington). He was even on one of the four stamps issued in 1993 celebrating the opening of the National Postal Museum! 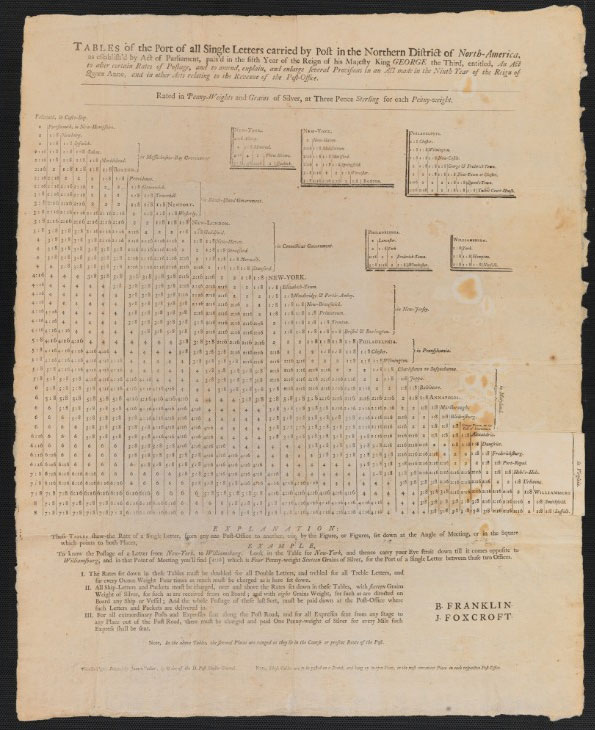 The rates on the chart, which became effective October 10, 1765, remained unchanged until the American Revolution. The original rates, expressed in British currency, were converted to pennyweights and grains of silver so that postage could be computed in colonial currency. Charts such as this were displayed in local post offices. 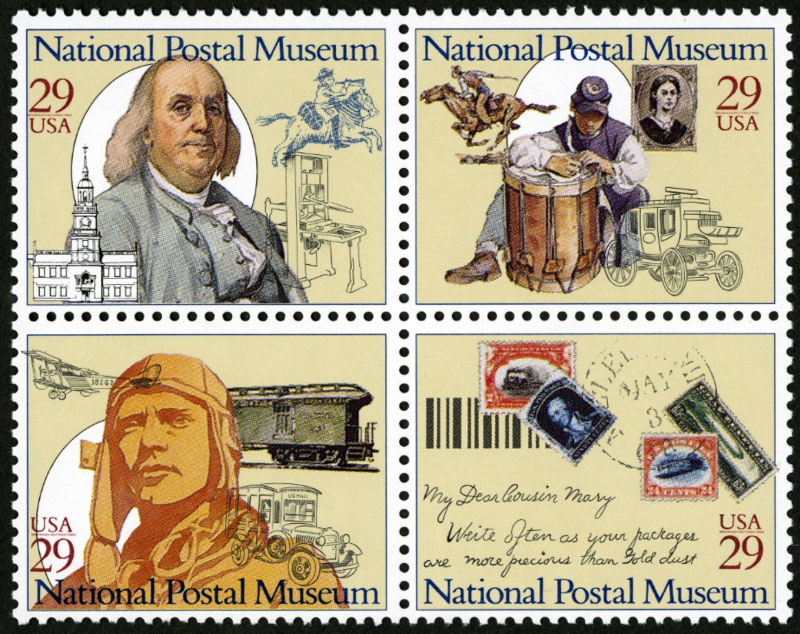 A stamp featuring Franklin was part of a set of four issued to celebrate the opening of the National Postal Museum in 1993.

(1) This myth rises from a letter from Franklin to his daughter commenting that the design of an eagle selected for use as the national symbol looked like a turkey. He followed that comment up with comparisons of each bird, “I am on this account not displeased that the Figure is not known as a Bald Eagle, but looks more like a Turkey. For the Truth the Turkey is in Comparison a much more respectable Bird, and withal a true original Native of America… He is besides, though a little vain & silly, a Bird of Courage, and would not hesitate to attack a Grenadier of the British Guards who should presume to invade his Farm Yard with a red Coat on.”