A Semester Spent Learning about Preservation

As part of the George Washington University’s Museum Studies Program, each student spends two semester interning at different museums getting hands on experience in a museum. This last semester (Fall 2015) I spent my internship in the Preservation Department of the National Postal Museum. During this experience I learned invaluable skills relating to collections management, preservation, and overall museum conduct.

My internship consisted of two main projects and numerous smaller and side projects. I was also able to observe the work of the staff and other interns. During one of my first weeks, I was able to visit the offsite storage facility and observe how the collection is stored and managed. Later in my internship we would make two more trips offsite to check on other collections, including the artifacts too large to be stored at the museum. I was able to participate in the museum’s rapid capture program where the museum was able to digitize 3,600 artifacts from the collection and import them into the database and online in less than a week. Seeing the outcome of this project and the effort behind the scenes was an amazing opportunity. As part of the outreach program, once a month I participated in an interactive table teaching the public about 10 Agents of Deterioration. 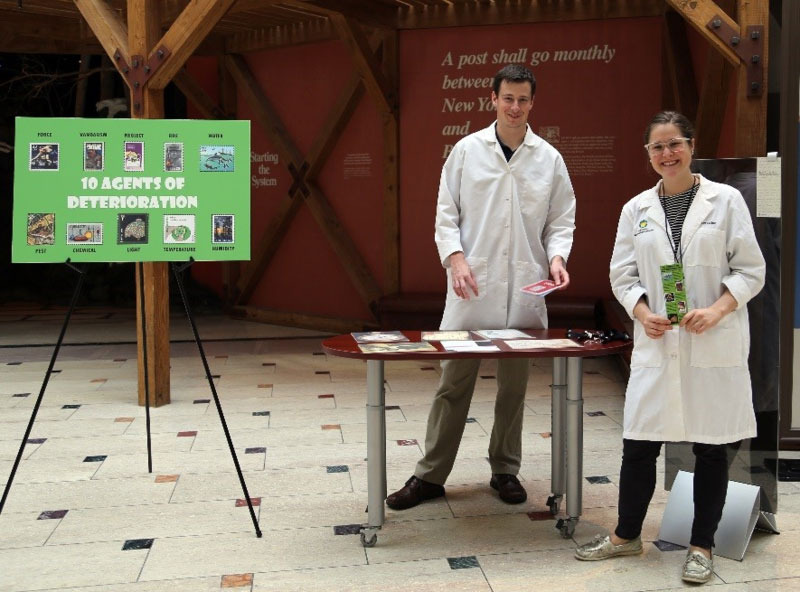 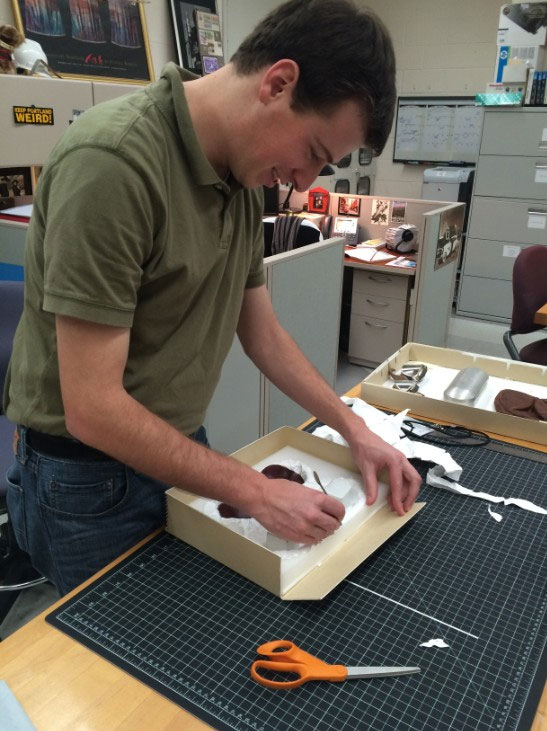 A major project was working with a new collection by processing and then rehousing it for long term storage. The collection was recently donated and contained shirts, hats, jackets, and pamphlets from Jerry Rogue Mail Boats. For this collection I created condition reports for each object (the shirts and jackets appeared to have come directly off the donor’s back) and imported these into TMS, the museum’s collection management database. The next step with this project was to take measurements and photos of the artifacts and again input this data into TMS. The last step was to properly house the collection for long term storage by placing them in buffered costume box and adding acid free tissue paper between each artifact.

One of my main projects this fall was working with the convention badges and patches in the museum collection. Similar to the Jerry Rogue project, I was working on imaging, rehousing and inventorying the collection. Using a previously made list of the convention badges I went through and confirmed that the badges were there along with taking images of the badges that need photos. Following the photos, five badges need to be rehoused. In this rehousing, the badges were being added onto blueboard trays. A small piece of the blueboard was cut out so the pin could lie flat. The badges were then secured using twill tape to prevent any movement. In a similar manner two patches were also rehoused. In this case I created the trays needed for the rehousing. The trays consisted of two pieces of blueboard glued together. The first piece of blue board was single ply and acted as the base. A second sheet of double ply board was then glue on top using Jade 403 (an acid free glue used in conservation). In the double ply board, sinkmats were cut out for the patches and a Mylar sheet was attached as a cover.

The other main project that I worked on dealt with the museum’s collection of Facing Slips. For those of you who do not know what a facing slip is, it is a small (2 inches by 4 inches) piece of paper that was placed at the front of a stack of mail. These slips usually contained information like where the bundle of mail was going and where it came from. Often, though, in this collection, some just had the stamp of origin. Again similar to my other projects this was another rehousing and database entry project (if you can’t tell yet that is a lot of what collection staff does). This time though I was removing the collection from glassine envelopes and placing them in archival folders. Along with this, each artifact gets numbered and entered into TMS. Since there are almost 6,000 facing slips in this collection, entering each object into TMS separately would take forever (numbering and rehousing them is already taking a lot of time). To speed up data entry, the information is entered into an excel spreadsheet and then, using the importer tool in TMS, all of the collection will upload at once. 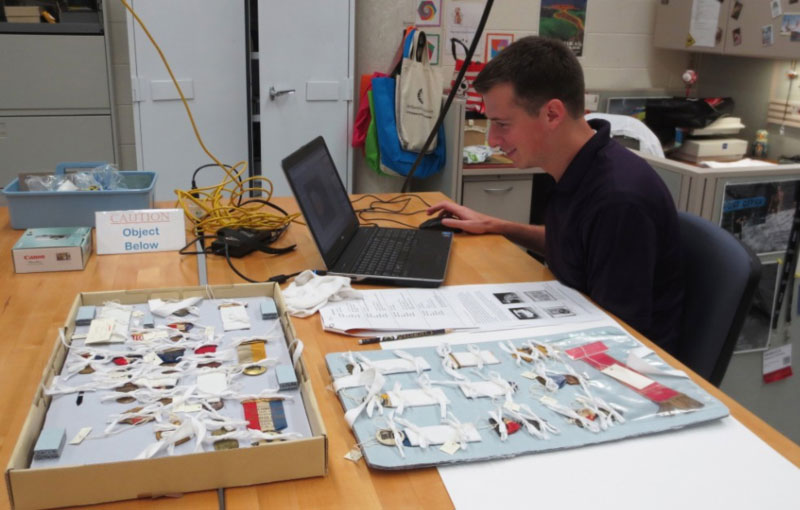 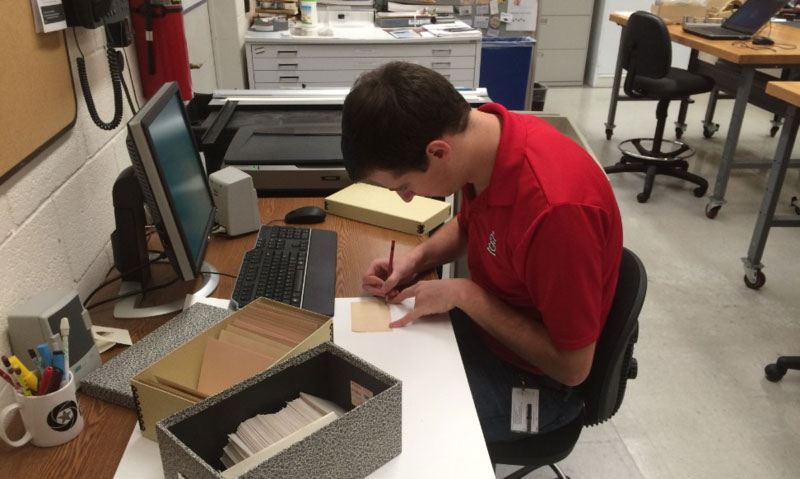 Along with these projects, I did many small tasks including box making, cleaning galleries / collection storage, sitting in on exhibit design meetings, encapsulating stamps for an ivory exhibit and setting up environmental monitors, all of which added both excitement and new skills to my internship experience. Throughout this internship I was able to learn a great deal about collections management and preservation. The biggest takeaway from this internship has not been the skills gained in rehousing, or data input, or inventorying, but rather the skills gained at being able to work on multiple projects at once and always ready to take on the next challenge, big or small.