Tents, Cabins, and Guestrooms: The History of the Grand Canyon’s El Tovar and Bright Angel Hotels 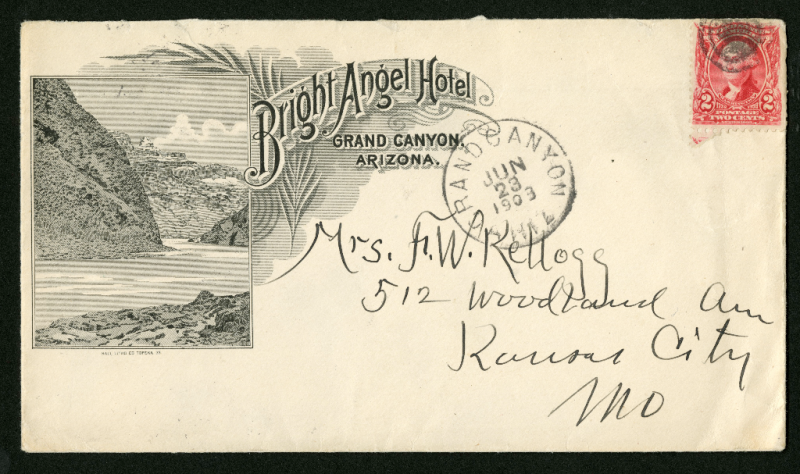 In today’s day and age, hotels are inextricably linked to vacationing and travel.Hotels not only provide travelers with overnight lodging but also with amenities and entertainment services at famous locations around the world.At the same time, hotels can also be tourist destinations, using their lavish accommodations to supplement the more remote attractions found in nature.The current exhibition “Trailblazing: 100 Years of our National Parks,” contains hotel covers and stationary that highlight the Grand Canyon’s early years of tourism in connection with park hotels.

Consisting of two buildings and a collection of tents, the Bright Angel Hotel incorporated the cabin of early settler Buckey O’Neill with a clapboard structure that served as the registration desk and restaurant.Guests stayed in cabin tents (wooden frames with plank floors and canvas walls) furnished with beds, linens, and seasonal essentials that were set up in rows along the canyon edge.While the amenities were slim, Bright Angel was more than adequate for the Grand Canyon’s early adventurers.

In 1901, Thurber sold Bright Angel Hotel to businessman Martin Buggeln. Under Buggeln’s management, the Bright Angel Hotel received small upgrades to its buildings, as well as housed the Grand Canyon Village post office, where Buggeln acted as postmaster from 1902-1907. Around the same time, the Atchison, Topeka and Santa Fe Railway arrived in Grand Canyon Village.However, the railroad brought its significant number of passengers and wealthier clientele to the canyon, making the current accommodations inadequate both in terms of size and comfort.To solve the growing lodging problems, the Santa Fe Railway commissioned the construction of El Tovar, an upscale hotel managed by the Harvey House Company.

Finished in 1905, El Tovar boasted nearly one hundred rooms, cold running water, indoor plumbing, and electric lights, and was considered the West’s most elegant hotel.As shown in El Tovar’s letterhead, the hotel enjoyed beautiful views of the Grand Canyon due to its location on the canyon’s edge; however, the hotel did not architecturally blend with the natural surroundings, but rather resembled a Swiss chalet crossed with a Norwegian villa, using Europe’s first-class resort style to attract its wealthy visitors.

In its first few years of operation, El Tovar flourished as a tourist destination on the South Rim, its popularity and success leading Fred Harvey to expand his enterprise and purchase the adjacent Bright Angel Hotel in 1907. To better serve the canyon’s middle-class travelers, Harvey constructed wood cabins to replace the camp’s conglomeration of tents and renamed it the Bright Angel Camp.These cabins remained in use until 1935, when the Bright Angel Lodge replaced Bright Angel Camp.Designed by famous park architect Mary Colter, the new Bright Angel Lodge complex included a rustic main building and lobby, as well as guest cabins and the renovated Buckey O’Neill cabin.The Bright Angel also relocated the area’s historic Red Horse cabin—once the Cameron Hotel and the former Grand Canyon Village post office (1910-1935)—and utilized it for guest quarters.

Today, El Tovar and the Bright Angel Lodge complex remain popular hotels on thecanyon rim, and like many buildings in Grand Canyon Village, both have been named National Historic Landmarks.

Holly Chisholm is a recent graduate of Washington College with a special interest in tourism history. As part of her NPM internship, she has written a series of guest blog posts inspired by objects in the museum collection and in the exhibition, “Trailblazing: 100 Years of Our National Parks.”