Healthful Recreation in the National Parks

In the late nineteenth and early twentieth centuries, nature and health-related wonders were important attractions in American vacationing. The Industrial Revolution had constructed cities, factories, and railroads, but it had also brought rapid change to the American workplace and pollution to the surrounding environment. In the face of these changes, many Americans longed for the wilderness, venturing into the forests and canyons of the United States as a way of both reliving a simpler time and escaping the crowded city. Similarly, in the absence of genuine scientific cures, physicians of this era often prescribed fresh air and a change in climate for their patients’ illnesses. The seashore, forests, and mountains were quickly understood to be the most healthful locations and became popular ground for hotels and other tourism-related services. In the National Postal Museum collection and the exhibit “Trailblazing: 100 Years of Our National Parks,” hotel covers from Hot Springs and Yosemite help tell the story of health and natural wonders as it relates to tourism, postal history, and the national parks. 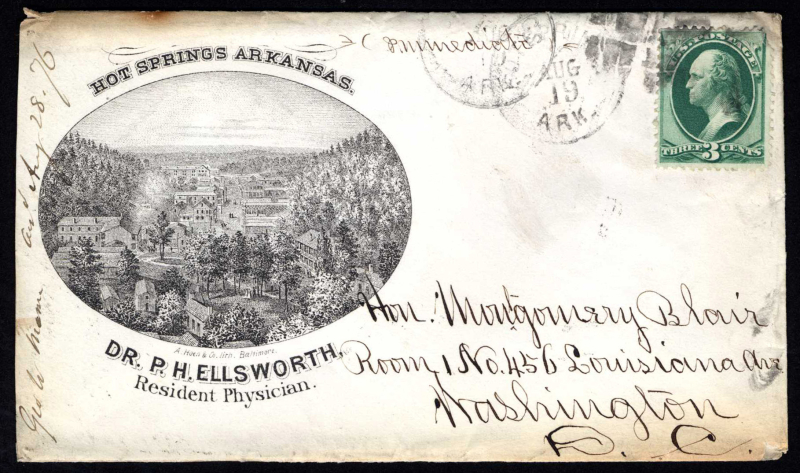 Dr. Prosper Harvey Ellsworth was a surgeon in the Union army’s 106th Illinois Infantry before he relocated to Hot Springs in 1866. Ellsworth became one of the city’s first physicians and was a founding member and secretary of the Hot Springs Medical Society. 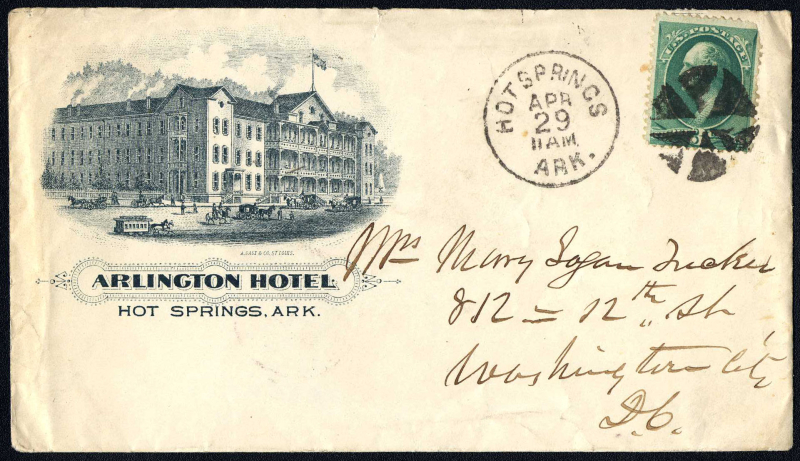 This cover depicts the first Arlington Hotel (1875-1893). The following two versions of the hotel were done in Spanish Revival and Mediterranean styles and featured Arlington’s signature towers.

Hot Springs National Park in Arkansas gained its fame from the area’s mineral and gas-rich thermal springs. Originally designated Hot Springs Reservation, the land was set aside by an act of Congress in 1832 to preserve its purportedly healing waters. After the National Park Service was created in 1916, Hot Springs became the nation’s eighteenth national park in 1921 and the oldest protected area in the system. As a national park, Hot Springs quickly developed into a bustling tourist destination that welcomed thousands of Americans eager to try the springs’ healthful waters.

At the northern end of Bathhouse Row, the Arlington Hotel provided travelers with luxurious and modern accommodations only steps away from Hot Springs’ famous waters. Opened in 1875, the Arlington Hotel pampered its wealthy clientele with high-end services and amenities, including lavish guestrooms and modern conveniences like electric lighting, elevators, and in-house bath facilities for men and women. The Arlington Hotel reached its heyday during Prohibition, when gangsters like Al Capone frequented Hot Springs for its horse racing and underground nightlife (Capone’s favorite room was 442). After significant remodels and a devastating fire, the current Arlington Hotel is the third structure to carry the Arlington name; still, it remains a popular destination for those seeking rejuvenation and relaxation at Hot Springs National Park. 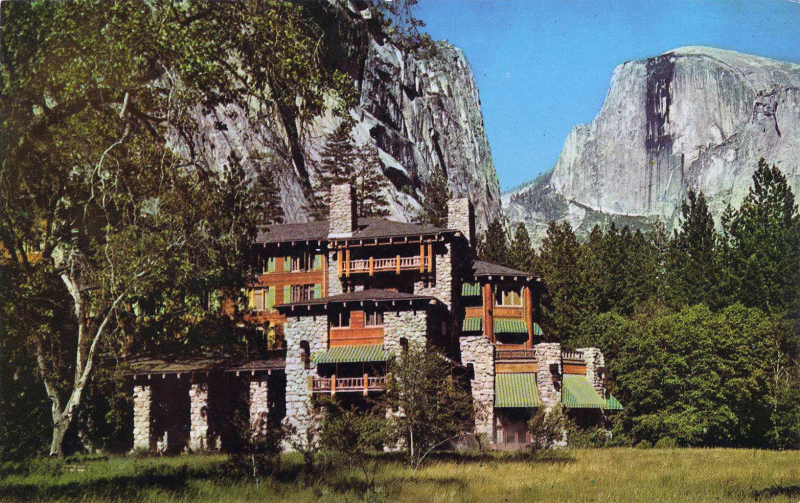 In addition to exercising, learning, and healing at Ahwahnee, sailors wrote letters. 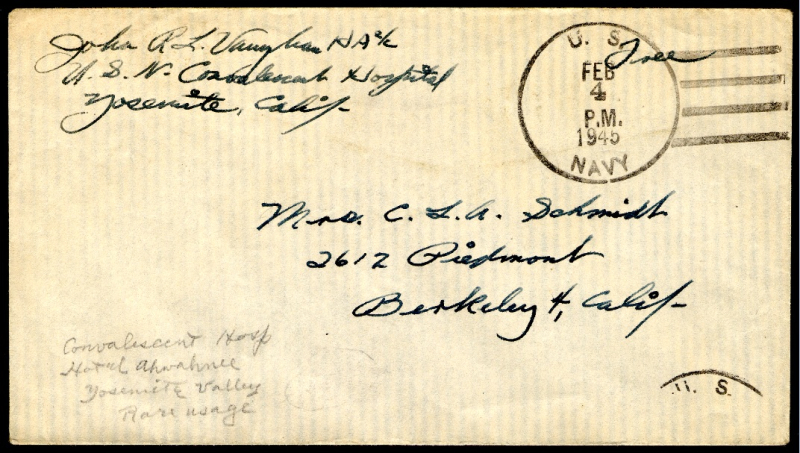 The cover pictured here was postmarked in 1945.

Similarly, the natural wonders of Yosemite National Park provided the perfect setting for World War II’s wounded and traumatized sailors to recuperate from the war. From 1943-1945, the Navy leased the park’s Ahwahnee Hotel as the Naval Convalescent Hospital of Yosemite National Park, hoping the quiet resort atmosphere could counteract the violence sailors witnessed in the Pacific theater. The Ahwahnee—which was experiencing low visitor traffic during the war—quickly transformed into a hospital and set to work treating sailors with injury and “war fatigue” (PTSD).

At first, the resort’s location actually made conditions worse, with Ahwahnee’s isolated and rustic facilities causing sailors to feel stranded in the middle of the forest. However, temporary recreational buildings and new sports equipment quickly solved the sailors’ boredom. With the Ahwahnee’s new amenities, the recovering men could spend their days participating in a variety of activities, such as fishing in Yosemite’s rivers and creeks, watching movies in the hotel’s main hall, and writing letters to friends and family back home. In its three years of operation, the Naval Convalescent Hospital used Yosemite’s peaceful atmosphere and natural wonders to help sailors mend from their time fighting overseas.

Holly Chisholm is a recent graduate of Washington College with a special interest in tourism history. As part of her NPM internship, she has written a series of guest blog posts inspired by objects in the museum collection and in the current exhibition, “Trailblazing: 100 Years of Our National Parks.”