By Nancy Pope, Curator and Historian

On June 19, 1958, at the height of the Cold War, nuclear submarine U.S.S. Nautilus (SSN-571) sailed into the Chukchi Sea bounded by two points of Alaska. The crew were under top-secret orders to be the first submarine to cross under the North Pole. The trip was oddly designated “Operation Sunshine.” 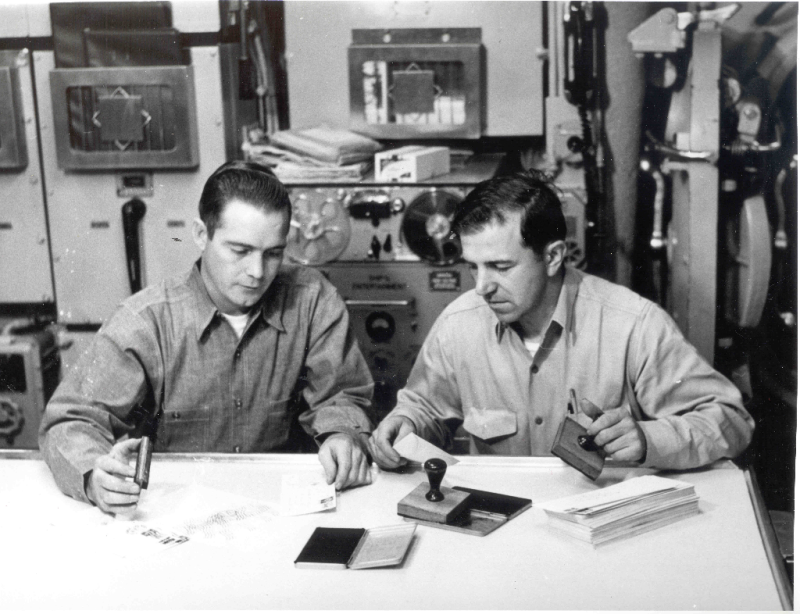 The crew began to realize that they might not be able to complete their task. As crewmember John C. Yuill later recalled, “It’s hard to realize now, with technology being what it is today, just how primitive our under ice detecting equipment was in 1958, even though we had the latest state of the art equipment.”[1] As the ship passed through the Bering Strait they found that the ice was thicker than anticipated. Yuill noted that the ship had to “grope along near the bottom, trying to find a way through into deeper water. It was tedious at times and nail-biting at others as we passed under ever thickening ridges of ice forcing us closer and closer to the sea bottom.”[2] When the crew found themselves with only about six feet of space between the ship and ice above, and the same distance from the bottom to the sea floor, Commander W. R. Anderson decided to move the ship back to safer waters, and try again later.

The two halves of the USS Nautilus commemorative cancellation

The submarine sailed to Pearl Harbor to await better conditions. While there, crewmembers John Krawczyk and Frank Holland hatched a philatelic plan and created special cancellation and envelope cachet stamps. When I spoke with Holland prior to events celebrating the 50th anniversary of the ship’s commission, he remembered that Krawczyk created the cachet cancellation stamp in two parts so neither of the shops making the stamp for him could guess the ship’s secret mission. He and Krawczyk convinced other seamen to help them cancel 1,528 envelopes while the sub was on its way north. 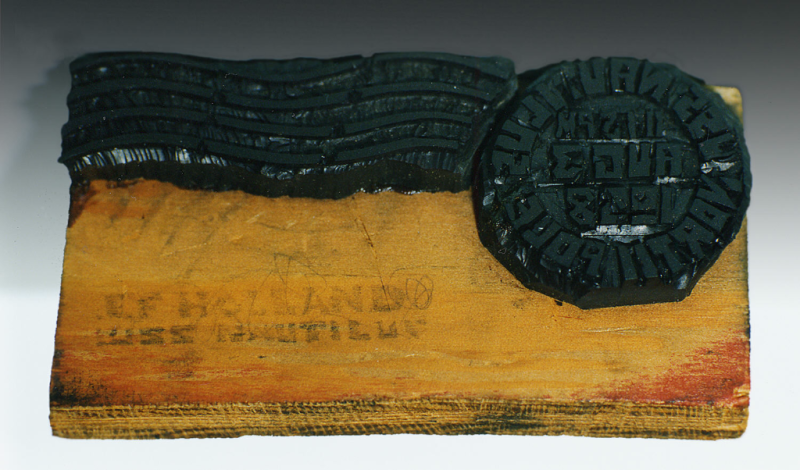 The stamp cancelling device, complete with Holland’s name and ship

The crew headed back, turning north just off Point Barrow, finding a sea valley that allowed the ship to pass through with more ease. On 11:15 (EDST) on the evening of August 3, 1958, the Nautilus reached the North Pole. Captain Anderson announced the ship had made the goal and cheers erupted throughout the ship. Holland cut the time of 11:15 into his cancellation device and applied it to all covers while the boat was there, at about 700 feet below water.

A “test” envelope covered with cancellations (minus the time of passage, as Holland had not yet carved it in)

Sonorman Alfred Charette noted that leaving the pole had its moments of confusion, a form of “longitudinal roulette,” as it were. As Charette explained, “when you are directly at the North Pole, as we were, every direction is south! The problem was that we were not sure exactly which South we were proceeding on to get out from under the ice.

One of the 1,528 envelopes canceled during the USS Nautilus’s trip under the North Pole, it is addressed to the director of the Smithsonian Institute[sic]

Two days after crossing under the pole, the ship emerged on August 5 northeast of Greenland. By the time the crew arrived in New York City, the Navy had brought their wives to the city to meet them for, as D. Randolph Harrell recollected, “the best liberty ever!”[4]