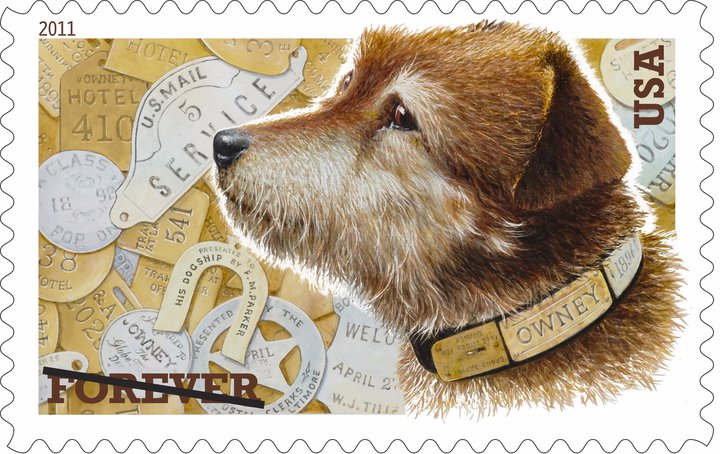 Inspired by our beloved mutt Owney, world-traveler and informal postal mascot from 1888-1897, the National Postal Museum will host the Dog Days of Summer Family Festival this Saturday, July 29th and you’re invited! Join us from 10:00 am to 3:00 pm to get to know Owney’s story and hear about his travels across the world. You’ll also gain an understanding of the role that other animals, such as mules, play in our postal system. Explore a wide variety of activities throughout the museum, including a scavenger hunt, Owney-puppet-making, screenings of the animated short “Owney: Tales from the Rails,” Story Corner, and the “Tracking Paws” map challenge charting some of the 400 stops Owney made throughout the world. We’ll also have an agility course simulating mule mail delivery to the foot of the Grand Canyon and free ice pops as supplies last.

The National Postal Museum has teamed up with local animal rescue groups and the Amtrak Police K-9 Unit for this special event. Sergeant Micah Jones from the Amtrak Police Department and his partner Summer, a female yellow Labrador, will demonstrate their patrol routine at 11:30 am and again at 2:00 pm in the Atrium. From 10:00 am to 2:00 pm, our program partners – the Humane Rescue Alliance, City Dogs Rescue, and Homeward Trails Animal Rescue – will hold an adoption fair on the museum’s outdoor terrace with rescue dogs and cats who are looking for their forever homes.

This free event is suitable for all ages and does not require advance registration. For a full program description, visit our event calendar.

As our excitement builds for this Saturday, we thought we’d share with you the dogs of NPM; like their predecessor Owney, many love to travel! 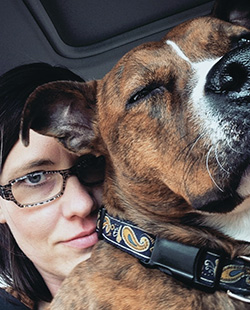 Carra is 7.5 year old pitbull rescue from Chicago. Hobbies include sleeping, chewing on her bone, begging for food, and chasing after squirrels, cats, motorcycles, and skateboards Carra will do just about anything for cheese, peanut butter, popcorn or carrots. She is an aficionado of soft furniture, particularly couches and beds, though dog beds are occasionally deemed good enough for her to lounge on. Speaking of, she is the most active sleeper you'll ever see--every single time she falls asleep there is dream barking, running, and growling. Every. Single. Time! 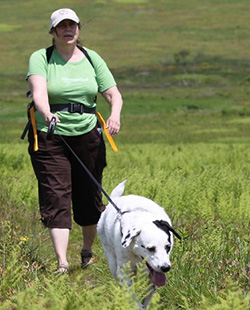 Daisy, an English Setter/Lab mix, prefers pointing at mail rather than retrieving which leads us to believe that she is more setter than lab. She will celebrate her 14th birthday next month, but still enjoys travelling in the car and visiting Nature Centers and National Parks (like Big Meadows in Shenandoah National Park, pictured here). She has traveled as far as Michigan where she barked at the Great Lakes. 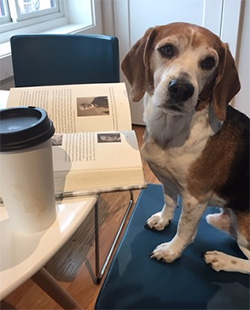 Dexter is an 8 year old Beagle who was born in Tucson, and moved to DC about 7 years ago. Like Owney, Dexter loves to travel. He often flies to Arizona and Santa Barbara and San Francisco, CA. He loves car rides, especially when he gets to stick his head out the window! This summer he took a road trip up to Maine with his parents. He likes to travel on boats too, and stands at the front so he can see everything that’s going on ahead. When he is at home in DC, Dexter knows that mail carriers are his friends. He likes them so much that he doesn’t even bark at them! Whenever his parents go away and can’t take him along, Dexter gets to stay with his friend Emily, who works for the Postal Museum. 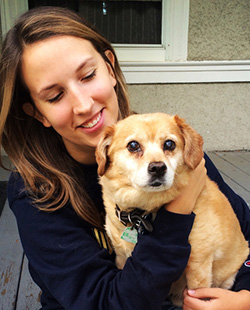 Jake is about 15 years old but a puppy at heart. He’s a mutt. He likes to sleep, search for scraps and steal socks. Jake loves a quick ride in the car with the windows down but would not enjoy the long-distance trips of Owney. 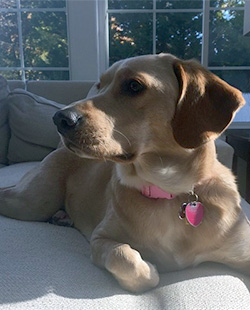 An active and affectionate dog, Luna Bell enjoys living on the water, not far from the bay bridge, and taking advantage of all the sights, sounds, and smells that the Eastern shore provides. As clearly evidenced by this contemplative, perfectly instagrammable picture, she is very photogenic! 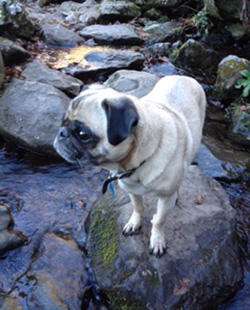 Patrick Henry is extremely enthusiastic in all his endeavors. Born in New York, the runt of the litter, he moved to DC almost 6 years ago and earlier this month celebrated his 9th birthday. Although not necessarily considered to be a breed known for their fortitude (pug), Patchy is scrappy! He loves lengthy, off-leash hikes through woods and along trails, and wading or hopping from rock to rock in shallow rivers and creeks. Patrick Henry is a big fan of all the great state and regional parks in Virginia and Maryland (pictured here in Shenandoah National Park), and is a real trooper on longer road trips, too. He also enjoys marathon walks through the city and feels compelled to warmly and personally greet anyone he encounters. He is delighted by little waves on the shore and aforementioned streams, but quite suspicious of large bodies of water, so he’d probably skip the trip Owney took overseas. 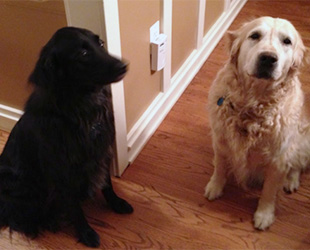 Surrey is a British Golden Retriever (blonder and curlier than the American Golden) and River is a rescue dog who has some lab and some shepherd in her. Surrey is 16 years old, but in her youth enjoyed a walk. Like many senior citizens, she now prefers a swim. River is 8 years old and loves our daily walks in the woods. Neither of them have ever traveled by train, but they love cars, boats and airplanes. Surrey was born in England and crossed to the United States on an airplane when she was 6 years old. She loves visiting and swimming in the ocean. River is a little more scared of the big waves, but loves swimming in calmer waters and visiting new places. 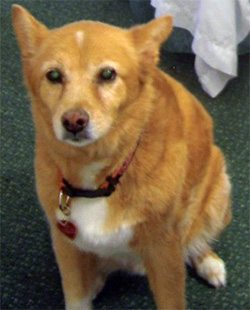 Ruby was an easy going soul who loved everyone be they human, dog, or gerbil. She didn’t have the same level of wanderlust as Owney, but if her people were traveling, she didn’t want to be anywhere else. Ruby was never a burden and always took on her fair share of chores on the road; she is pictured here at a Red Roof Inn in North Carolina while on a drive between DC and Florida.

...And we just had to include a certain cat with a particular fondness for Priority Mail boxes! 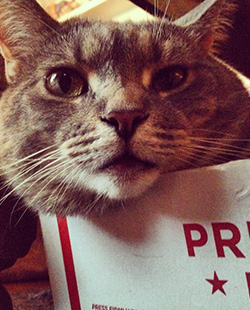 Sadee is a very busy 6 year old gray tabby who loves managing the household and going for adventure walks in the backyard. She and Owney would have been quite the duo riding the rails and delivering mail!

So, whether you have a dog or not (or would like to adopt one on Saturday...), we hope you can make it to our Dog Days of Summer Family Festival! Bring Owney's epic and endearing story to life and celebrate all the amazing animals hustling and working hard in their various jobs and responsibilities. The Dog Days are typically the hottest of the year - beat the heat in our nice and cool museum and, hey, learn something new and have some fun while you're at it! See you Saturday!