On December 15, 1966, the world mourned the loss of Walter Elias Disney, America’s well-loved animator, film producer, and theme-park entrepreneur. Following his death, tributes from around the world honored Disney and his legacy of beloved characters, including the 6-cent Walt Disney commemorative stamp issued by the United States Post Office on September 11, 1968.

While postal regulations at the time stated that any non-presidential individual honored on a commemorative stamp must be dead for ten years, the support for a Disney tribute was overwhelming. The Office of the Postmaster General corresponded with hundreds of Americans requesting a Walt Disney stamp, receiving letters from private citizens as well as the Walt Disney Studios, Governor Ronald Reagan, actors Fess Parker and John Wayne, and a number of United States Congressmen. The sheer quantity of written pleas from the public moved the Citizen’s Stamp Advisory Committee to approve a Disney stamp, and less than two years after Disney’s death, the stamp design and first day ceremony entered their respective planning phases. 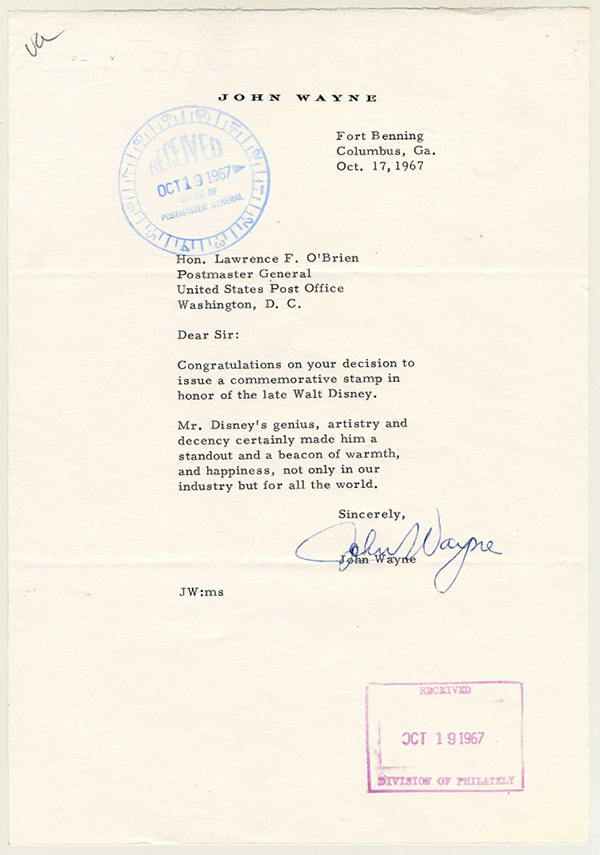 Several American cities with a connection to Disney vied for the honor of hosting his stamp ceremony. On the list was Disney’s birthplace of Chicago, as well as Kansas City, Missouri, where Disney began his adventure into animation and started the Laugh-O-Gram Studios. Similarly, California’s Anaheim and Burbank campaigned both as locations important in Disney’s adult life and as the sites of Disney’s greatest achievements: Disneyland and the Walt Disney Studios. However, it was Disney’s boyhood home of Marceline, Missouri, that ultimately won the honor. From 1906-1911, Disney spent his childhood playing on the family farm and learning to draw the barnyard animals. As an adult, he recalled his time in rural Marceline as the happiest years of his life, and even modeled Disneyland’s “Main Street U.S.A.” and the setting of “Lady and the Tramp” after the Missouri town.

For the stamp design, a number of private citizens mailed in their own drawings and ideas; ultimately, though, Walt Disney Studios artists C. Robert Moore and Paul Wenzel were chosen to design the stamp. The commemorative stamp depicts Wenzel’s portrait of Walt with a parade of children from the park attraction “It’s a Small World” as they dance their way toward a world touched by Disney’s magic.  Originally, the design included famous Disney characters on the stamp selvage, but copyright issues prevented Mickey and friends from making it onto the finished product. While NPM has the proposed selvage designs, the idea was ultimately scrapped and the stamps were released with the usual Mr. Zip in the margins. 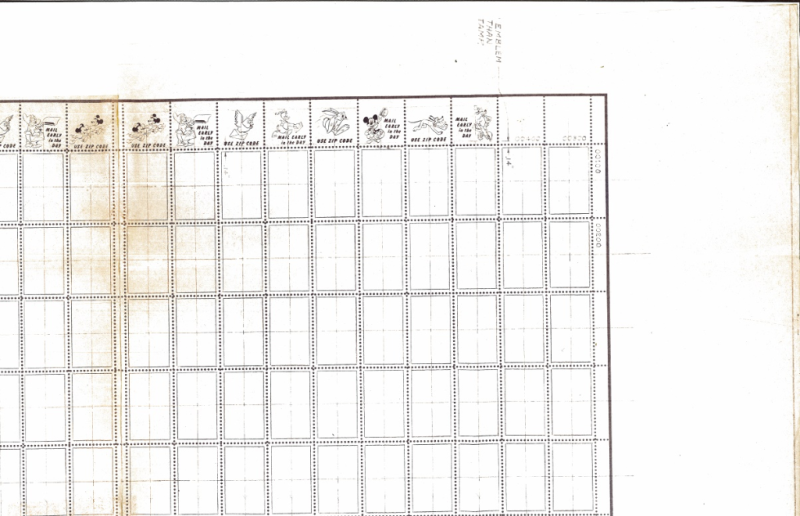 On September 11, 1968, a crowd gathered at the Marceline Post Office to celebrate the Walt Disney stamp’s first day of issue ceremony.  Among those in attendance were Disney’s widow Lillian, his brother Roy, daughters Sharon Disney Brown and Diane Disney Miller, and the two stamp designers—all of whom had arrived from Kansas City via the Santa Fe Walt Disney Special.  The day’s celebrations included a small parade and the official ceremony and presentation of the stamp. Additionally, a plaque was unveiled at the town’s post office to honor “Marceline’s Favorite Son.”

During the ceremony, Postmaster General W. Marvin Watson gave a moving speech on the life and influence of Walt Disney, stating that the flood of messages he had received for the stamp was a true testament to Disney and his inspiring achievements.  In closing, Watson quoted from a letter written by a Michigan prison inmate, using his words to convey the reason behind the day’s events: “A stamp to commemorate Walt Disney is a very good idea.  Walt Disney is part of all of us.”

The Post Office Department later announced the Disney stamp’s success, with 499,505 first day cancellations and 644,469 stamps sold on its first day of issue.

Holly Chisholm is a recent graduate of Washington College with a special interest in tourism history. As part of her NPM internship, she has written a series of guest blog posts inspired by objects in the museum's collection.