As Fleet appraised the work ahead of him in early May he faced a deadline of May 15 to start the new airmail service with concern. The bulk of the work for this project had been focused on securing and equipping airfields. Only one pilot had been detailed to the mail service, First Lieutenant Walter Miller, who was stationed at Hazelhurst Field in Mineola, Long Island, NY. The Post Office then insisted that lieutenants James Edgerton and George Boyle be added to the list. Both were soon on their way to Hazelhurst. Edgerton’s father was the purchasing agent for the Post Office. Boyle was engaged to the daughter of Judge Charles McChord, currently the Interstate Commerce Commissioner. Judge McChord had ruled in the Post Office’s favor when private shipping companies fought the parcel post service in court. Of the army pilots who flew for Major Fleet, only one, Paul Culver, had extensive flight experience, and Culver wanted to fly in the war, not carry the mail. As he wife later noted, his reaction to the assignment was, “Can you feature being a mailman when there is a war on?” The other pilots were Stephen Bonsal, E.W. Kilgore and Torrey Webb. 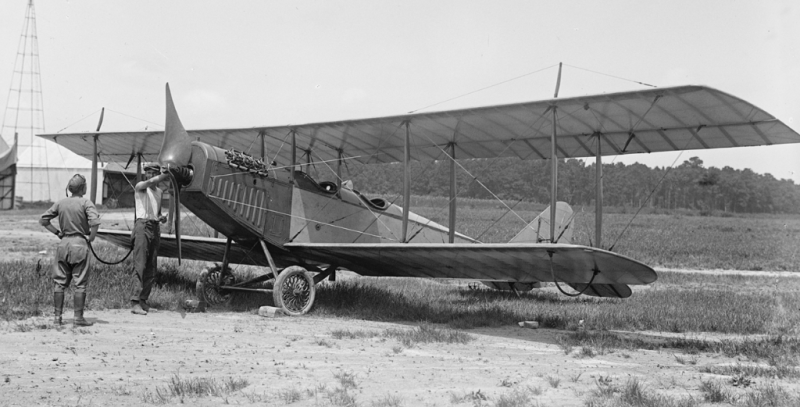 A JN-4D version of the "Jenny" aircraft photographed at Langley Field, VA

Of course pilots can’t fly the mail without airplanes. Fleet and Secretary of War Newton Baker argued about making the May 15 deadline without planes that were ready to fly. The army’s Curtiss JN-4D aircraft could only fly 88 miles, not the 100 or more between New York and Philadelphia and between Philadelphia and Washington. Neither Baker nor the Post Office would back down. May 15 had been announced and it would be met.

Fleet arranged with the Curtiss Corporation to convert six of their JN-4D planes into JN-4Hs, i.e., replacing their 90-hp OX-5 engines with 150-hp Hispano-Suiza engines. To ensure enough fuel for the flights, two gas tanks were hooked together. At least now Fleet had planes that could make the trips.

It wasn’t until Sunday, May 12, three days before the service would start, that all the pilots (except Boyle who remained in Washington) and the modified aircrafts came together at last. But any joy Fleet may have felt was short-lived. While the JN-4Hs had been delivered to Hazelhurst, Long Island they were still in their crates. He now had to marshal his pilots and any mechanics they could spare at Hazelhurst to assemble, test, and fly the planes to the right cities by 11:30 a.m. on Wednesday, May 15. As Lt. Edgerton noted some years later:

Picture the situation. The essential room for assembly was occupied by a mountain of crates. Before our new aircraft could emerge from their cocoons, butterfly fashion, there must be room to spread their wings. Each of the five pilots marked off the boundaries of his area by chalk … My plane must be uncrated, assembled, serviced, checked, warmed up, tuned and flight checked. Wow! I staggered at the sheer audacity of the challenge.[1]

By sunset on Monday, May 13, they had uncrated the planes and began to assemble them. These parts were not simple “plug and play” components. The group ran into a number of problems, including a leaky gas tank in one plane, broken fuselage wires on two others, and no working air pressure safety valves in all six. Once completed, the planes had to be tested, adjusted, and tested again. The task was daunting, but no one would give up.

While pilots and mechanics continued working through Tuesday, May 14, Fleet was making his calculations. By 11 a.m. the next morning, he had to have one plane each in Washington and New York, and two in Philadelphia to complete the routes. Fortunately, Edgerton and Culver had finished their planes and Webb was nearly done. Fleet told Webb to fly his plane to Belmont Park, Queens, New York, when it was finished. Edgerton and Culver would fly their planes to Philadelphia while Fleet accompanied them in a borrowed JN-4D. The final planes would be flown where needed when ready, hopefully in the day or so.

The trio took off at 4:15 p.m. Tuesday afternoon and almost immediately flew into a fog. Fleet’s lieutenants managed to reach Bustleton in their more powerful planes, although Culver almost did not make it intact. Coming out of the fog over Philadelphia, he found himself just feet away from the William Penn statue that graces City Hall. Fleet got lost and had to land in a farm field for directions. Nearing Bustleton but low on fuel, he landed on a golf course several miles away, busting a wheel. Edgerton and Culver drove a spare wheel out to Fleet, helping to fix his plane. While Edgerton drove back, Culver flew his boss in the repaired JN-4D to Bustleton where Edgerton had lined up cars facing the fields, their headlights lighting the way for Culver’s landing.

After a well-deserved night’s sleep, Fleet flew one of the JN-4H “Jennies” south to Washington, landing without trouble at Potomac Park at 10:35 a.m. Wednesday morning, in time for the 11:30 a.m. start of the service. Patting himself on the back after surviving the hectic last three days, Fleet must have felt that nothing else could possibly go wrong. He would have been mistaken.

"Postmen of the Skies" is now open at the National Postal Museum. The exhibition celebrates the world’s first regularly scheduled airmail service and the brave pilots who risked their lives flying the mail. Visit us on May 15 - the 100th anniversary of those inaugural flights - to receive a free balsa wood National Postal Museum airplane.