In April 1918, the Post Office Department was a month away from the start of a regularly scheduled airmail service. Newspapers had begun to publish the date, May 15, but often modifying it as “tentative.” Early in the month, the location of only one airfield in the three planned cities (Washington, Philadelphia and New York) was actually identified – Potomac Park in Washington. While the space left much to be desired as an airfield, postal officials selected it because it was not far from the city’s post office. Major Fleet, who had been placed in charge of the army operations, objected to Potomac Park, noting that it was just 900’ x 300’ and surrounded by six-foot-tall trees, making any approach trickier than it should be. He suggested the existing airfield at College Park, MD, but George Conner, who had been placed in charge of securing airfield locations, argued that it was nine miles away from the post office, which he deemed too far away.

In Philadelphia, the local papers gushed that the work being done at the Bustleton field was happening so quickly that the May 15 date just might move up in time to the first week in May. The gushing was uncalled for. Bustleton, in what is now northeastern Philadelphia, required a lot of work to serve as a functioning airfield. It had telephone and telegraph poles and wires on the western end and tall trees on the southern, along with a very uneven surface that needed lots of grading. But it was the best Conner could find in Philadelphia, and he leased the land for $800 per year. By the fall of 1919 the Post Office had secured more powerful planes and no longer had to stop in Philadelphia. The field was turned into a repair depot and emergency landing field. On June 30, 1921, the repair depot was closed and the Bustleton field was abandoned. 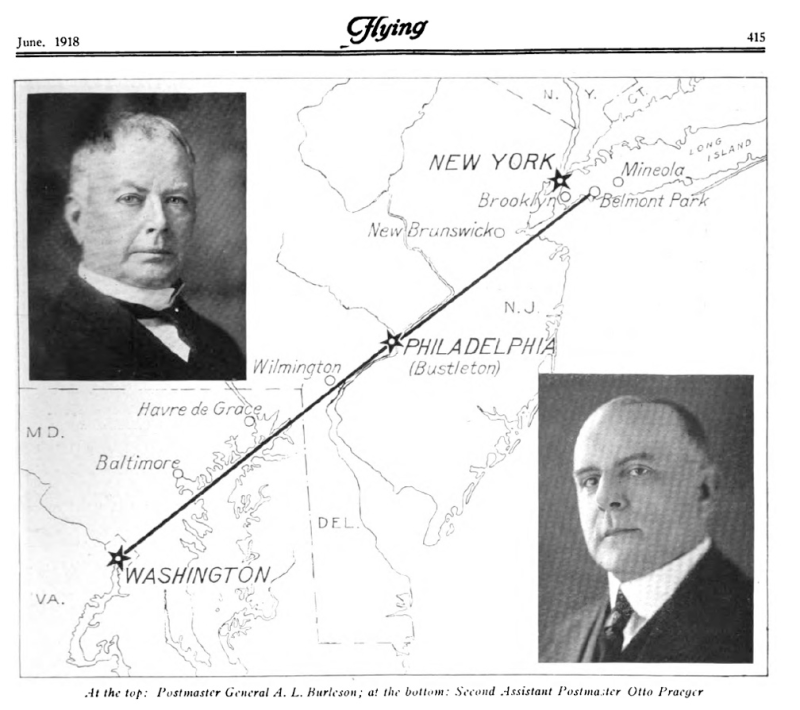 June 1918 issue of “Flying” magazine featured an enthusiastic article supporting the new airmail service. The route is featured in this image, along with photographs of Postmaster General Albert Burleson and Second Assistant Postmaster General Otto Praeger.

In the meantime, the April air was filled with excitement about the new airmail service. So much so that several cities asked the Post Office or congressional representatives to add airmail service to their locales. Never mind that the planes in use did not have much range. The only reason Philadelphia was on the original airmail route was because the planes could not fly between New York and Washington without stopping to refuel. Airmail was in and mayors wanted it. Routes were rumored to be opening between Chicago and St. Louis, Washington and Atlanta, as well as New York and Boston. The most ambitious rumor was an article in the Salem, OR Daily Capital Journal which celebrated the pending creation of a transcontinental airmail route. “A large tract of land on the old exposition site [in San Francisco] has been turned over to the Pacific Aero club by expo directors & will be used as the Pacific terminus of a coast to coast aerial route, Lowell E. Hardy, secretary of Aero club announced today.” All of this before a single plane had carried a single piece of mail on the first route.

While most papers got the basic information correct about the upcoming service, some got their wires crossed somewhere along the line, perhaps sharing what their editors or publishers envisioned an airmail service to be. On April 28, the Omaha Daily Bee noted that the service would include an aircraft flying over the city of New York and “when it gets on the right spot the mail clerk will press a button or pull a control wire, and the mail bags will drop down into a net spread in the hollow square around which the post office is built.” Not quite what postal officials had in mind.

By the end of the April, postal officials had secured the three landing fields and were comfortable in their decision to publicize May 15, 1918 as the first day of the service. Perhaps they even believed that all would go smoothly from that point on. They would be wrong.

The upcoming exhibition "Postmen of the Skies" opens on May 1, 2018 at the National Postal Museum in celebration of the 100th anniversary of the world’s first regularly scheduled airmail service. Visit the museum on opening day for special programs commemorating the centennial and stay tuned to our blog for more backstory on the events that occurred in the days leading up to the historic inaugural flight.