Only seven days left to see the extraordinary philatelic objects generously loaned by William H. Gross, currently on display at the Smithsonian National Postal Museum! These objects will be showcased in the new William H. Gross Stamp Gallery when it opens. 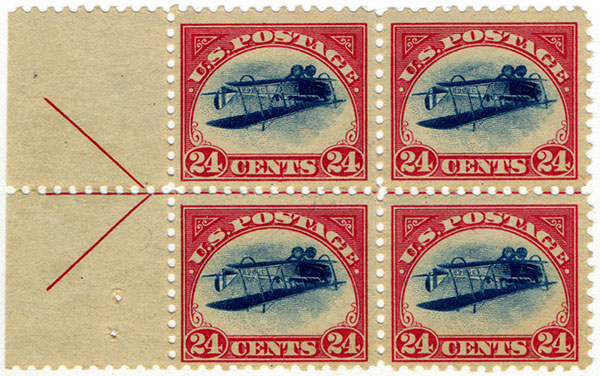 One of the most iconic and recognizable stamp errors ever discovered is the 1918 24c “Inverted Jenny” air post stamp. In 1918 the Post Office issued its first air mail postage stamp, to promote the newly established air mail service. A special 24c stamp was prepared, depicting the “Curtiss Jenny” biplane in the center in blue, surrounded by a red frame. One sheet of 100 stamps was discovered with all of the stamps within the sheet having had the blue biplane in the center printed upside down.

From the original sheet of 100, only six blocks of four still exist – four of which are contained within the William Gross collection. He has loaned one of these spectacular blocks of four, the unique left sheet margin block of four (positions 41-42/51-52) to the Smithsonian National Postal Museum. 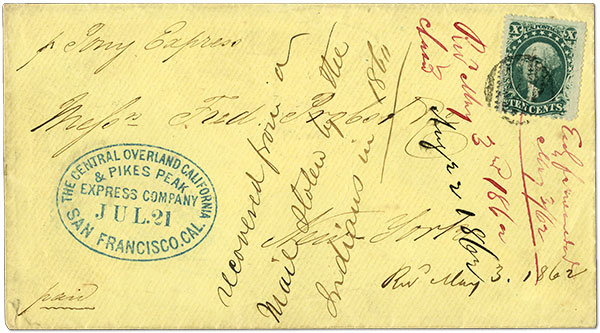 1860 Pony Express Cover Recovered from Mail Stolen by the Indians

Considered one of the most historically significant covers in United States Postal history – and a truly historical artifact of Americana – is a most remarkable 1860 Pony Express cover from the Gross collection. It is a cover carried via the famous Pony Express service from San Francisco to New York City. However, Indians in Nevada disrupted the delivery of the letter where the Pony Express rider was overtaken (and purportedly scalped). However, the pony escaped with the letter pouch, which was subsequently recovered out on the plains and the letters ultimately forwarded to their destination.

This is the only such cover known and is poignantly notated on the front of the envelope “recovered from a mail stolen by the Indians in 1860.” The cover was finally delivered in 1862.

On July 1, 1847 the first stamps ever produced by the United States government were issued to the general public. Two stamps were issued – a Five Cent stamp depicting Benjamin Franklin and a Ten Cent Stamp featuring George Washington. One of the most famous and valuable envelopes (or “covers” as philatelists refer to them) is the first recorded usage of these stamps – a pair of the Ten Cent stamps on a cover from New York City Indianapolis, Indiana used on July 2, 1847. No other such cover exists dated this early.

The July 2, 1847 cover bearing the Ten Cent 1847 Issue was discovered in 1972 between the pages of a book in a library of an Indianapolis tax consultant. Prior to its discovery, the earliest recorded usage of the 1847 Issue was a July 7th cover bearing a single Five Cent stamp. To date, this July 2nd cover remains the earliest known usage of a United States postage stamp.

Inverted Jenny
Back to Top