Bad weather and equipment problems forced Paul Oakes to take three days and five forced landings to fly his Martin #205 from Cleveland to Chicago in mid-January 1920. He arrived with a broken tailskid, inoperative ailerons, holes punched in wing coverings and both engines running rough.

On January 18, 1923, Oakes was flying de Havilland #223 out of Cheyenne with mechanic's helper W. R. Acer riding along. Either to entertain Acer or people below, Oakes did some stunts in the de Havilland, including low level steep wingovers. While making an abrupt turn downwind at 500 feet, the plane stalled and plunged into the ground nose first, exploding into flames and killing both men. 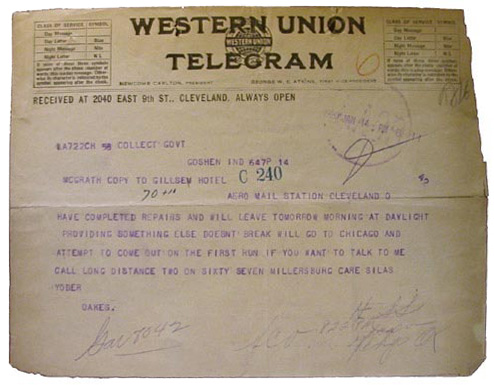 Oakes sent this telegram to assure postal officials that despite a rough start, he was on his way.
- Courtesy of the National Archives and Records Administration