Object of the Month: Weather Reports 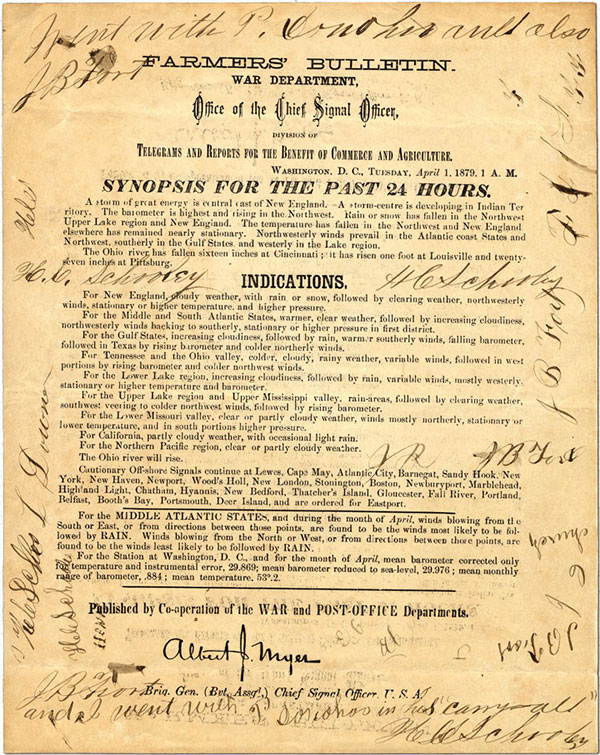 Postmasters displayed the daily publication “Farmers’ Bulletin,” like the April 1, 1879 edition pictured here, for their patrons. The bulletins were “published by co-operation of the War and Post-Office Departments” for disseminating information to rural populations. Weather details from around the nation were compiled in Washington, DC for the preceding day by 1 a.m. The bulletins were telegraphed, printed, and dispatched to postmasters before daylight every day but Sunday. This “synopsis” of national information gave communities access to weather trends that could affect their lives and livelihoods.

As the nation grew in size and complexity, the need for information about weather patterns and predictions expanded across a broad spectrum of daily activities. From agriculture and commerce to local school districts and other government agencies, information expectations and requirements increased. Systemizing the collection of meteorological data and coordination of volunteer observers was initiated by Smithsonian Secretary Joseph Henry shortly after the institution was established in 1846. Henry employed the telegraph for his reporting network, and it played a central role when operations for the national weather service were transferred to the U.S. Army Signal Corps in 1870. Within three years the Post Office Department assisted with distributing the “Farmers’ Bulletins” to thousands of communities through local post offices.

In 1895, the Postal Guide announced the proposal that postmasters print on and circulate postcards with the local, daily forecasts furnished by the Weather Bureau (since 1891 the responsibility of the Department of Agriculture). Some postmasters upon the receipt of first class mail marked the back of the envelopes with this brief weather update, such as the cover received at Montgomery, Alabama in 1897 (below).

The Green Cove Springs, Florida envelope from 1888 is a precursor of this back-stamping practice (below).

The Post Office Department also used its Rural Free Delivery system to further publicize news of storm conditions. Along their route, RFD carriers distributed slips of paper with forecasts. Signal flags and whistles were also tried. These postal and telegraph modes were eclipsed as new communication channels developed, such as telephone and radio.

About the Author
Lynn Heidelbaugh is a curator specializing in the history of the U.S. Postal Service, military mail, and the material culture of letter writing. Ms. Heidelbaugh has served as lead curator for several National Postal Museum exhibitions including, Mail Call (2011), Behind the Badge: The U.S. Postal Inspection Service (2014) and My Fellow Soldiers: Letters from World War I (2017), for which she received a Smithsonian Secretary’s Research Award.

Nature and the Environment Science and Technology
Back to Top