Horseless wagons began to appear in Europe and America in the late 1800s. American postal officials, continuously seeking faster and more effective ways of moving mail, were drawn to the possibilities of these new self-propelled wagons. The match between postal service and vehicle was a great success. By 1920, the U.S. Post Office Department controlled the largest civilian vehicular fleet in the world. By the 1960s, these vehicles had become an essential tool of city delivery service. Today letter carriers and their vehicles are commonplace in neighborhoods across the country.

Speeding Along and Setting a Standard

In December 1899, an automobile mail wagon was tested for the first time. It was manufactured by the Winton Company of Cleveland, Ohio. The test was conducted with snow both on the ground and falling. Even in those conditions, the new vehicle covered 22 miles of paved and unpaved streets in just under two and one-half hours, stopping at 126 mailboxes along the route. The average time for a horse and wagon over the same route was six hours.

Officials cheered the dramatic increase in collection speed and soon postmasters across the country were testing motorized vehicles. Collection times were cut at least in half in most trials. This was exciting news for the time-conscious Post Office Department.

This video chronicles the use of motorized vehicles to move mail within America's towns and cities.

But, it wasn't always this way.

Until the mid-1800s, city folk had two ways to get their mail.

Richer people paid someone to fetch their mail for them.

But most went to the post-office themselves.

It was a time-consuming chore.

Ladies were discouraged from being seen around rough-and-tumble post offices.

In 1858 came a new way to mail letters, the letterbox, attached to lampposts across the city.

This meant that mail would be delivered to your door, free of charge, by the Post Office, and each year, more and more cities would get free mail delivery.

Of course the mail still moved at the speed of a horse.

But by the end of the 19th century, America's cities swelled and the demand on the postal service increased.

Letterboxes had to be bigger.

But the biggest innovation of the mall was the horseless carriage.

It changed the way we carry people and had revolutionized the way people carried the mail.

The Winton motor wagon became the first motorized vehicle to carry mail over a 22 mile route, in one-third the time of a horse-drawn wagon.

Some postmasters followed up with automobile tests of their own.

But the car was in its infancy - and most roads were better suited for horses.

Could the horseless carriage really carry the ever-growing volume of mail in America's cities?

In the fall of 1906, assistant Postmaster General Frank Hitchcock decided to find out.

The result: and overwhelming success.

The horse-drawn wagons days were numbered at the Post Office.

Or at least to carry the mailman.

In larger cities, post men would pile into a wagon at the start of the day, be driven to their routes and deliver the mail on foot, with new mail distributed to them throughout that day.

Then they were driven back to the post office.

In 1913, that volume would get much larger, with the introduction of Parcel Post Service.

The Post Office Department was now also in the package delivery business.

Boxes, newspapers, magazines - by 1920, letter carriers had moved two and a quarter billion parcels - in addition to the increasing load of regular mail they were already carrying.

The smaller motor-cars that carried the mail became overwhelmed.

World War one created a surplus of trucks that were drafted into service by the Post Office.

The Post Office had forty-three different types of trucks, a nightmare to maintain.

They needed to pare down their fleet.

By 1923 the Post Office simplified its fleet to only a few manufacturers making mail trucks, the largest of which was the Ford Motor Company.

In the 1930s, this fleet began to age, but the Great Depression prevented the Post Office from upgrading its trucks.

Then, World War II broke out.

And manufacturers turned out vehicles for the war effort, but none to move mail.

Through all this, however, the average city resident still got his or her mail from a letter carrier traveling on foot, braving the elements to deliver a steadily increasing volume of mail - more than they could carry at one time.

After the war the Post Office had a plan.

Letter carriers would drive their mail to their route, or even from house-to-house.

They were sheltered from the elements and wouldn't have to go back and forth for more mail.

The fleet needed to be simplified and made more efficient.

For this, the Post Office needed a light flexible fuel-efficient vehicle.

It had to be inexpensive.

And from this the Mailster was born.

The three-wheeled lightweight Mailster was unveiled with great optimism in 1957.

The Post Office was changing the way the mail was delivered.

The letter carrier could now carry the 35 pounds of regular mail - and deliver parcels, too - faster.

But, the Mailster was a lemon.

It was too small and flimsy - even dangerous.

It struggled up hills.

It was top-heavy and tipped over too easil.

It could not get through more than three inches of snow.

It choked the carrier with its own exhaust.

The Mailster would become a notorious flop.

So, the Post Office turned to a vehicle very familiar to the World War II generation - the Jeep.

The tough, nimble Jeep had earned its stripes in battle and was well-suited to the task of delivering urban and suburban mail in all weather conditions.

The steering wheel was moved to the right, trimming 30 to 60 minutes off a delivery day.

The Jeep had been used in the 1950s, and when the Mailster failed, the Jeep became a mainstay of the carrier's fleet for more than 20 years.

In the 1980s, the Postal Service decided to have a vehicle built to their specifications that would carry carriers and their mail.

It had to be able to cart more mail, be reliable in bad weather as well as good, and hold up to the demands of mail delivery service.

They had learned the lesson of the Mailsters.

The Long-Life Vehicle, or LLV, first rolled off assembly lines in 1986.

Made of lightweight aluminum, but large, enclosed and tough as a truck, the LLV went through a test phase as if it were an astronaut-in-training.

Three prototypes were developed of this vehicle, but only one company would be rewarded with a contract to produce the LLV.

The LLV can carry a half-ton of mail in Arizona summers and Vermont winters.

It became the meat-and-potatoes vehicle of the letter carrier.

Grumman Company would make 99,150 of these familiar vehicles, which are still delivering most of the mail today.

But a new century demands a next-step vehicle.

The FFV runs on a combination of unleaded gasoline and ethanol, a renewable fuel made from corn.

New vehicles and innovative ways of moving the mail are constantly being explored.

As time marches forward, the Postal Service keeps step always with an eye for what is just around the corner.

It's rich tradition continues to evolve and change right alongside America's diverse landscape. 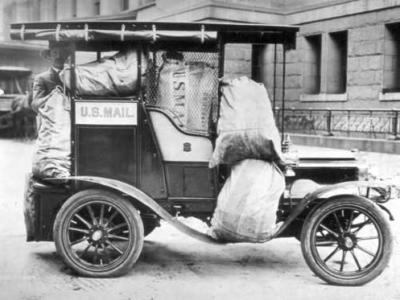 In 1906, Postmaster General Frank Hitchcock organized a test of two Columbian Mark vehicles in Baltimore, Maryland. The drivers worked for the vehicle contractors and the carriers for the postal service. The Columbian Marks could carry two mailbags and a few small parcels. The carrier stood on the back of the truck for easy access to mailboxes along the route. The success of these tests helped drive the demand by American postmasters for motorized vehicles in more cities. 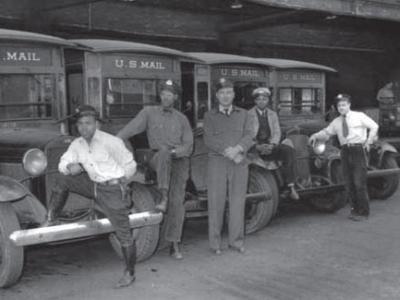 By 1921, the mish-mash of vehicle types that was the U.S. postal fleet had become unwieldy. The 4,000 trucks owned by the Department consisted of 43 different types of trucks by 23 different manufacturers. The cost to maintain parts and train mechanics to service all the vehicle styles was draining the postal budget. 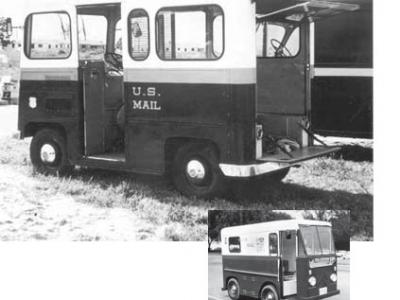 For the first half of the 20th century, mail trucks transported both carriers and their mail to the spot where the daily rounds began on foot. Faced with more homes to reach, and more mail to bring, the Post Office Department’s solution was to put their letter carriers behind the wheel. By using vehicles to haul all that mail, carriers could complete longer routes in the same amount of time. 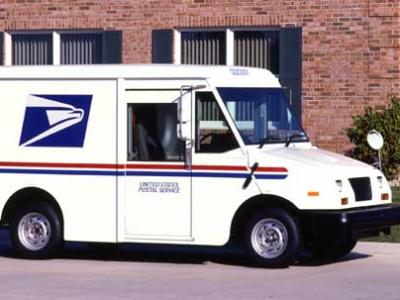 As of 2004, there are 188,613 delivery vehicles in service in the United States. These white vehicles are common neighborhood sights. We watch and wait as carriers use them to help bring us our share of the over 600,000,000 pieces of mail processed in the U.S. each day.

Learn more About Down the Road

This exhibit was made possible through the generous support of Ford Motor Company Fund.