The National Postal Museum was recently visited by David Redden, a vice president of Sotheby’s, and some precious cargo, the One-Cent Magenta from British Guiana. (Sotheby's will auction the stamp in Manhattan in June.) Mr. Redden was joined by Robert Odenweller, of the museum's Council of Philatelists, a security officer, James Barron, a reporter from the New York Times and a photographer from the paper.

The occasion for the visit was to use the museum's forensic equipment to record information about one of the world's rarest stamps. Tom Lera, the museum's Winton Blount Research Chair, utilized several pieces of equipment that are part of the museum's philatelic research lab -- the VSC6000, Leica Microscope, X-ray Fluorescence Spectrometer (XRF) and the Fourier Transform Infrared Spectroscope (FT-IR). 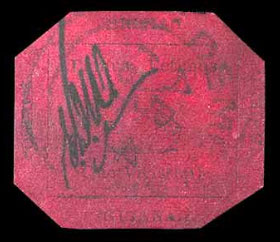 Tom examined the stamp and recorded detailed information on the markings, elements making up the pigments used for the magenta color and additional background data which could be used in future studies. Specifically, he used the Video Spectral Comparator 6000, which is a high resolution analyzer, allowing for the removal of color to better see the stamp and its markings under high magnification. The XRF to look at the elements used in making the magenta color and in making the paper and the FT-IR to determine the organic compounds present. 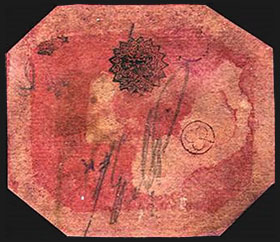 Back of stamp showing the marking and signatures of previous owners. Back of stamp showing markings: two stamps of Ferrari's trefoil mark; a large faint "H" of Arthur Hind; a small "FK" of Finnbar Kenny, the stamp manager at Macy's who brokered its sale by Hind's widow; a small shooting star added by Frederic Small; a penciled "IW" by Irwin Weinberg ($280,000 in 1970); a large penciled "J E d P", initials of DuPont. ($935,000 in 1980)

Detailed information about the the stamp was recorded related to the markings, elements making up the pigments used for the magenta color and additional background data which could be used in future studies.

About the Author
In 2007, Thomas Lera was appointed the Winton M. Blount Research Chair at the Smithsonian National Postal Museum. He has written over 100 philatelic articles and papers which have been featured in leading journals. He is a national philatelic judge, has been a member of the Committee of Accreditation on National Judges and Exhibitions for the American Philatelic Society, was a past president of NAPEX, and is a member of several philatelic societies including the Royal Philatelic Society of London.