Owney was a mixed breed dog, people who met him agreed he was mostly terrier, but few agreed on other elements of his ancestral background. Owney’s lack of a pure breed look, mixed with a wide variation of talent among newspaper artists, allowed for some interesting, occasionally odd, images of Owney that accompanied some of his newspaper stories. 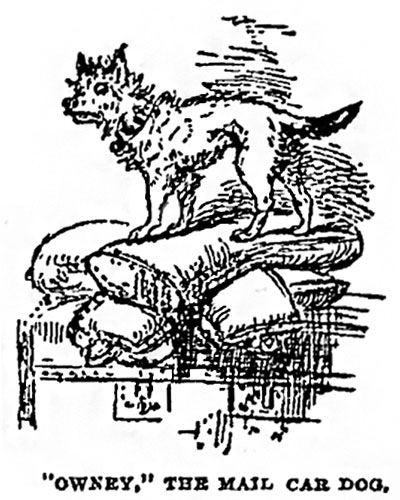 The first known image of Owney to appear in a newspaper was this rather scary looking creature that appeared in the May 17, 1891 issue of the Boston Daily Globe. Of course Owney was still somewhat new to the railway mail circuit at that time, and was becoming famous for defending the mailbags against any who tried to touch them, except, of course, mail workers. Perhaps this artist caught the "guard dog" side of Owney’s character when he shared this likeness. 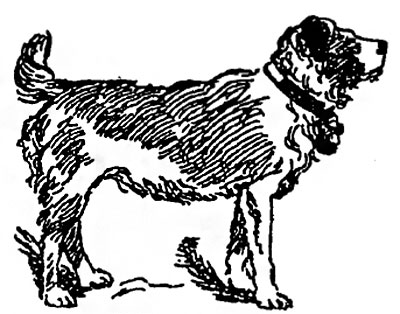 The next year, the Atlanta Constitution weighed in with its interpretation of the dog, capturing a friendlier, tail-wagging canine in an article about the dog that ran on April 11, 1892. 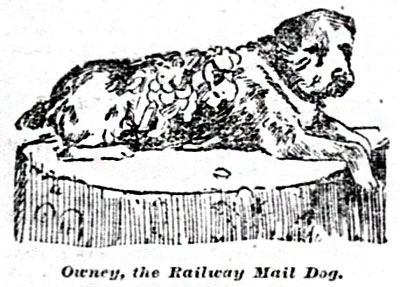 By 1893, tales of Owney’s travels were appearing in newspapers across the country. In April of that year he visited a number of cities in California. While in San Francisco, the San Francisco Call ran this image of the wandering dog. The illustration shows not only Owney’s tags, but also features him showing off his treasured tags. 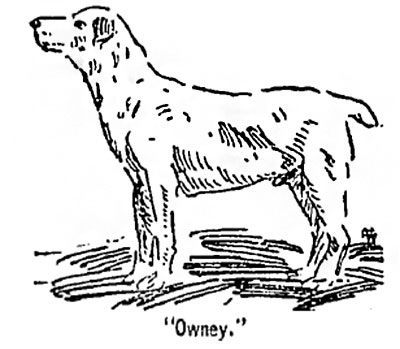 But as they say, beauty is in the eye of the beholder. The very next day Owney was invited to attend a dog show In Los Angeles, California. While there, an artist rendered this version of Owney at the show. In just one day, Owney had been transformed from a calm terrier covered with medals to a proud, alert show dog. And as anyone who met Owney would have said, the dog was anything but a show dog. 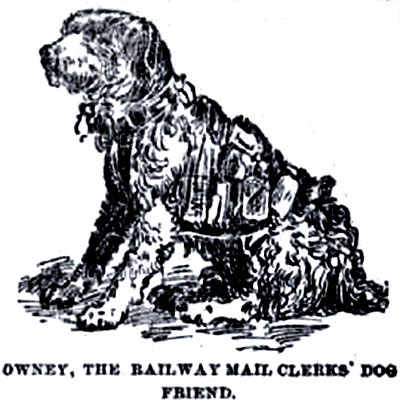 The citizens of Maysville, Kentucky, were great fans of Owney. Each time the dog visited their town; they spoiled him, announced his presence in the newspaper, and celebrated his return. On January 4, 1895, the town newspaper, the Hopkinsville Kentuckian, ran this cute and cuddly image of Owney in the paper. Perhaps the town newspaper’s artist was just a bit better at his craft than the others, or perhaps the extra love and devotion of the citizens of Maysville for the wandering canine just shined through. 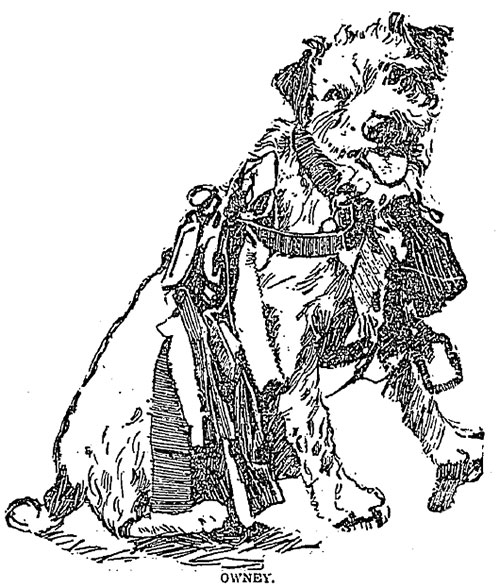 In 1896, one image was popular in a number of newspapers. That image was titled by one newspaper, the Omaha Daily Bee, as being of “Ownie.” But spelling aside, this image perpetuates the view of this friendly and lively dog that shows off his tags as he travels the country. 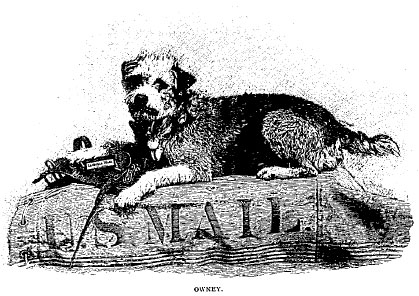 St. Nicholas, a children’s magazine, ran two stories on Owney, both of which used several illustrations of the dog. Some of these illustrations also appeared in newspaper accounts of the dog and his travels. And some continue to be popular with Owney authors today. One of the most familiar images from St. Nicolas magazine is the illustration below. 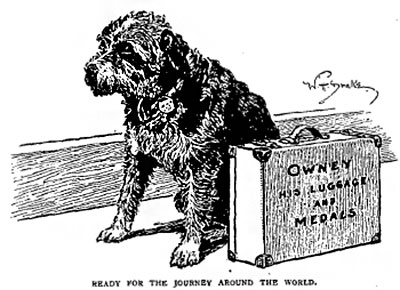 Owney with tags only on his collar lies on a clearly marked US mail sack, guarding it from any and all who might wish to interfere with the US mail. The image is a nice visual reminder of the dog and his self-appointed responsibilities.

Finally, we can thank the artists at St. Nicholas magazine for this most appropriate, if fanciful, image of the world traveling pooch. The magazine imagined Owney sitting patiently and waiting for the next train, with a traveling suitcase for his "luggage and medals" by his side. It was a great tribute to the dog that would not stay put.