Fortunately for George Pomeroy, he was an excellent pilot. If that had not been the case, his career with the service would have ended two years before it did. On December 21, 1924, Pomeroy used his mail airplane to help a friend hunt antelope in Kimball County, Nebraska. Not only did he misuse a mail airplane, but he killed a protected animal. On January 14, 1925, Pomeroy was fined $155 by the country for "having in his possession one certain antelope." Superintendent D. B. Colyer forwarded a letter to Second Assistant Postmaster General Egge outlining Pomeroy's activities.

"Reserve pilot Pomeroy left Chicago at 9:43 am and arrived at North Platte 4:25 pm. He reported that he had landed at Lodgepole, Nebraska, due to a broken stabilize brace wire at 10;58 am. After tying up the brace wire he reported that the remnant of the time was consumed trying to start the motor. My investigation discloses he landed about 11 a.m. S.W. of Kimball on ranch of Mr. Norberg. On landing, advised Mr. Norberg that there were a bunch of antelope nearby." Mr. Norberg stationed himself in a spot, and Pomeroy got back in his airplane and drove the antelope to Norberg. "He did in the neighborhood of 2 hours flying, driving the antelope around the countryside trying to get them close enough for Mr. Norberg to make a kill."

"At least one antelope was killed. Mr. Pomeroy landed and loaded carcass into mailpit."

In response, Egge noted that the Isaac Walton League of Nebraska intended to call the crime to the attention of the Postmaster General and the President of the United States, noting,"if such action is taken we cannot consistently keep Pomeroy in our service."

In the end, Pomeroy was suspended without pay for 30 days, as his supervisor argued that it would take more time and money than it was worth to find and locate a replacement pilot. Egge finally acknowledged that "I believe the offense merits firing, but to get a replacement would cost a few thousand dollars, so Pomeroy kept his job. 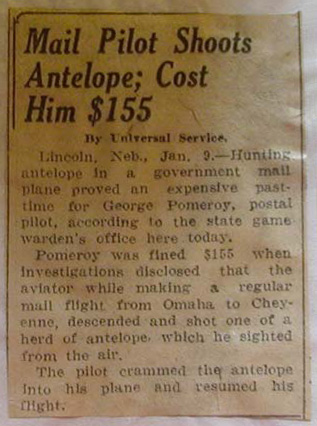 This unidentified newspaper clipping relates the story of George Pomeroy's killing of a protected antelope.
- Courtesy of the National Archives and Records Administration