In preparation for the exhibition John Lennon: The Green Album - which runs through February 3, 2019 at the National Postal Museum – John Lennon’s childhood stamp album recently received a thorough condition assessment. Following its acquisition in 2005, the album underwent extensive conservation treatment in order to stabilize the cover and binding. Since then, the album has been maintained through a systematic, broad-based program of collections care. In addition to being housed in a custom made enclosure in a climate controlled storage area, each time the Lennon album is handled for loan or exhibition, a detailed report is prepared in order to record the item’s current condition. Through routine monitoring and examination, small changes in condition – such as loose threads or weak hinges – can be address immediately with minimally invasive procedures before the need for more complex conservation treatment becomes necessary.

The recent condition assessment of the album revealed the need for minor cover repairs and flattening and re-adhering of a loose stamp. Additional repairs included mending and flattening the New Zealand pages, two of the most used and most exhibited pages of the album.

The album is a commercially produced Mercury Stamp Album, commonly available in the early 1950s. Lennon's older cousin, Stanley Parkes, started the album and later gifted it to a young John Lennon. It contains 565 stamps on more than 150 pages. The green cloth covering the album is relatively thin, noticeably worn and stained, and sensitive to fading from overexposure to light. Careful monitoring of the cover before each exhibition is essential to insure that the cloth remains intact and that the cover joints function well without breaking. In addition to specifying light levels for the upcoming exhibition – specifically not to exceed 5 footcandles (a traditional unit of illumination used by museum professionals) – a thorough condition assessment of the item revealed loose threads along the front cover joint. If left unrepaired, these loose threads could lead to additional fraying and eventual tearing of the cloth along the spine of the book. In this case, the threads were re-adhered with methyl cellulose, a synthetically produced cellulose-based adhesive commonly used in book and paper conservation. 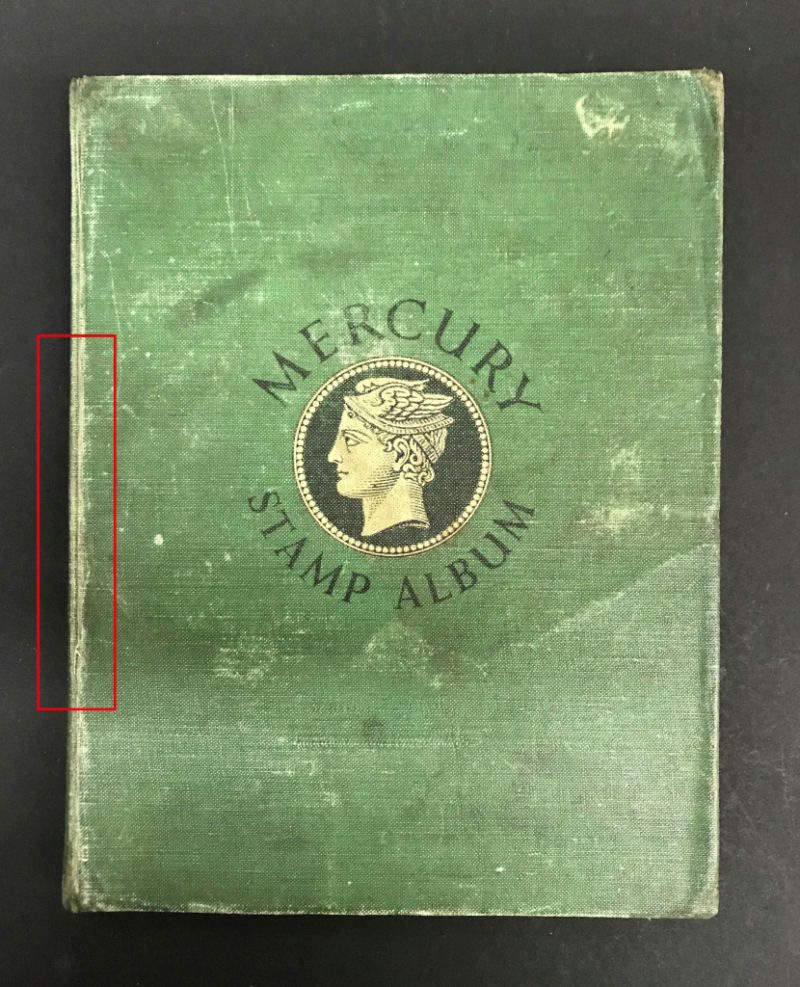 John Lennon’s childhood stamp album (2005.2018.1) exhibits signs of wear along the joint, a natural result of handling and opening the book. Areas of wear must be monitored and stabilized when needed in order to prevent further damage. 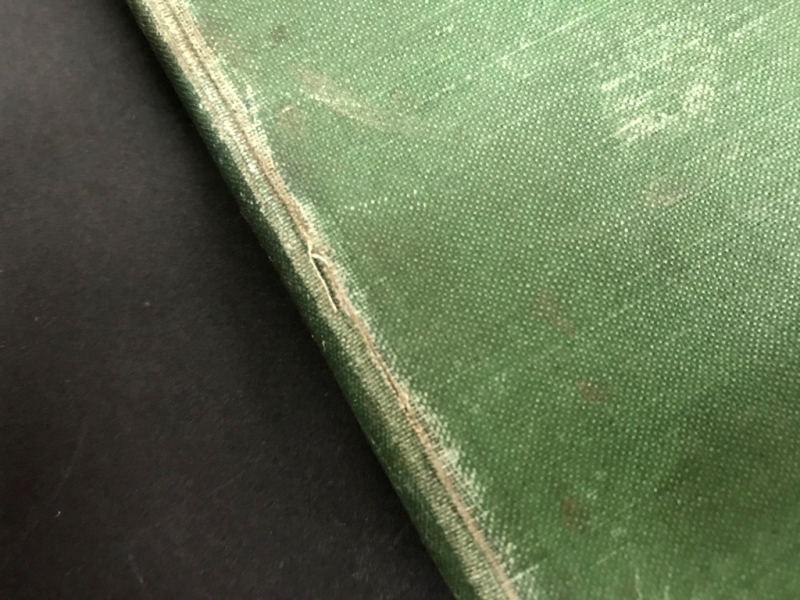 Loose threads, such as the ones pictured above, were stabilized and re-attached with methyl cellulose in order to prevent further damage or fraying.

Beyond the repairs to the cover, the collections team decided that the album would benefit from additional conservation treatment which would focus on three areas:

Treatment would stabilize the album and result in a better overall presentation, allowing viewers to focus on the individual stamps rather than being distracted by various aspects of damage.

The stamps are attached to the album pages with small glassine hinges which minimize damage to the original adhesive layer and allow the stamps some degree of flexibility and movement as the pages are turned. Unfortunately, stamps hinged close to the gutter margins are particularly susceptible to folding and creasing when the album is closed. Adhering the stamps directly to the pages with small dots of methyl cellulose would limit the possibility of future creasing, but would damage the adhesive layer on the stamp and significantly alter the appearance of the album pages. Instead, routine monitoring – and humidification and flattening of creased stamps when necessary – means that we are able to preserve the stamps the way they were when a young John Lennon first attached them.

This Poste Italiane stamp is attached close to the gutter of page 99 and is in constant risk of being creased (image left, before treatment) when the album is closed. A light application of moisture and pressure allows the stamp to be flattened and returned to its original appearance (image right, after treatment).

Detailed notes are added to the treatment report to identify which stamps are most at risk of creasing or folding. Knowing which pages contain particularly fragile stamps helps curators and collection managers know when to take additional care when handling certain pages.

Since the album’s acquisition by the museum, the Uganda stamp has always been detached, tucked in above another stamp. This has been a source of concern, especially when the album travels for exhibition. Given the number of missing stamps from this page, it was difficult to know the original placement of the detached stamp. In order to resolve the issue, the stamp was removed from the album and its crumpled glassine hinge was carefully humidified and flattened. Once the hinge was flattened, the tear pattern could be matched with the corresponding remnant of hinge on the album page, thus guaranteeing correct placement. The hinge was reattached with methyl cellulose.

The loose Uganda stamp (before treatment, image left) was at risk of being lost each time the album was handled. Reattachement of the stamp in its correct location (after treatment, image right) helps preserve the stamp and makes for a better presentation of the page. 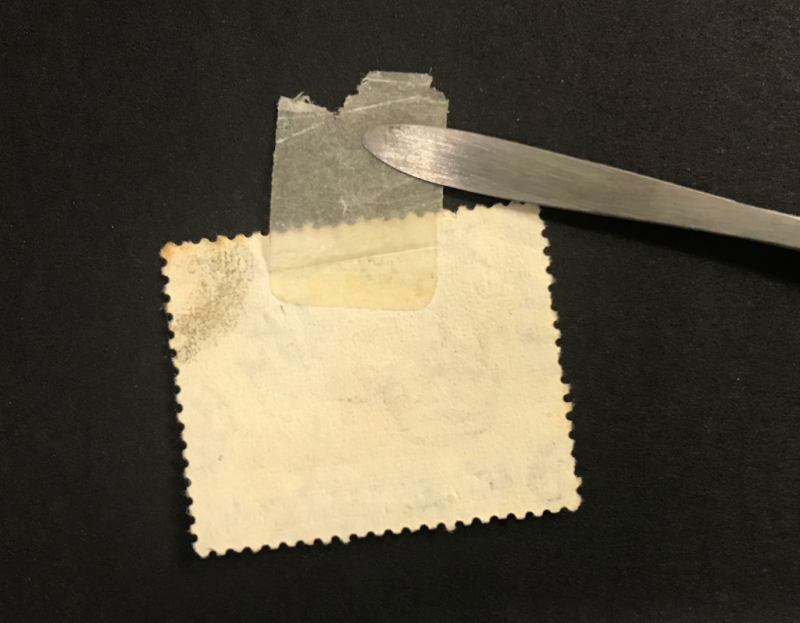 Unfolding and matching the torn edges of the hinge on the Uganda stamp with the portion of the hinge still attached to the album page insured accurate placement of the stamp.

Because of what appears to be frequent repositioning of stamps, there are many torn hinges and missing stamps. In order to preserve evidence of removal and rearrangement, not every tear or broken hinge should be repaired. Instead, only the areas of damage which limit use of the album or which may result in further damage are considered for repair. In the case of the New Zealand pages, the creases in the gutter margin of pages 34 and 35 had been left undisturbed for years, making the album difficult to open and resulting in worn areas susceptible to future damage.

Repairing the New Zealand pages involved a two-step process of humidification and flattening the pages and then repairing the paper. The album pages were locally humidified in the gutter area and pressed between thin sheets of acid free blotter made from unbuffered alpha cellulose fibers. Once flattened, the tear in the gutter margin was repaired with long fibered Japanese paper selected to match the color and tone of the album pages. Repair paper was positioned using surgical tweezers and attached with a thin layer of methyl cellulose. The most prominent creases were reinforced with Japanese paper in order to prevent creases from reforming.

The repairs made to John Lennon’s childhood stamp album were straightforward and relied on traditional and well-established conservation techniques. One of the most interesting aspects of the treatment was the decision-making process that guided what to repair and what to leave untouched. Evidence of wear and daily use allows us to interpret the context of how an object was used. Removing signs of use may erase important aspects of an object’s history and should be undertaken only after careful consideration. When approaching conservation treatment, conservators often begin by asking two questions:

In the case of the Lennon album, we designed a treatment that improved the function of the book, allowing the New Zealand pages to open fully, without removing or altering evidence of how the album was used. Continued monitoring of the album each time it is exhibited will insure that existing areas of wear (the cover joint) or at-risk portions (the stamps affixed near the gutter margin) remain stable over time without the need for extensive treatment which would unnecessarily alter the album.

John Lennon: The Green Album is on display at the Smithsonian’s National Postal Museum from September 7, 2018 through February 3, 2019. The exhibition coincides with the U.S. Postal Service’s issuance of the John Lennon Forever stamp, honoring the legendary singer and songwriter.