A Zoning System in Development 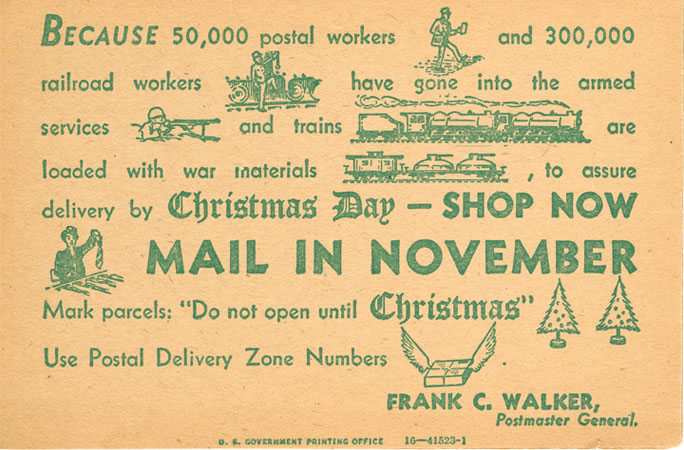 In 1943, the Post Office Department implemented a system of postal zoning that was used until the debut of the new ZIP Code system in 1963.

The concept of postal zoning, or assigning numbers based on geographic regions, was not new to the 1960’s ZIP Code campaign. The basic idea of postal zoning came into being in 1943, in the midst of World War II. At this time, U.S. annual mail volume was growing steadily (the years between 1940 and 1943 saw an increase from about 28 billion pieces of mail to about 33 billion pieces of mail). In addition, post offices across the country were forced to hire inexperienced clerks as more experienced staff members went off to serve in the war. The creation of a postal zone system was deemed necessary in order to improve the accuracy and efficiency of mail sorting and delivery. Zone numbers were implemented in 124 of the country’s largest urban areas, and individual delivery districts within these areas were given one or two digit codes, to be written as part of the address after the city name. These early postal zone codes faced little opposition and caught on quickly with businesses and the American public.(1)

The Need for ZIP Code, an Improved Zoning System

The Postal Delivery Zone System that was implemented in 1943 was utilized in mail sorting and delivery until the early 1960’s. In 1962, the Postmaster General of the United States, James Edward Day, declared that the system was outdated and outmatched by the nation’s rapid urban expansion and climbing mail volume.(2) Between 1943 and 1962, annual mail volume doubled, growing from 33 billion pieces of mail to 66.5 billion.(3) Business growth accompanied urban expansion, bringing new and large volume mailings of advertisements and periodicals. The old zoning system of could not move the mail efficiently in the face of this type of rapid growth. In addition, the development of suburban communities and greater geographic dispersion of the country’s population made mail delivery more complicated. In order to keep the mail moving as smoothly as possible, the Postmaster General proclaimed an urgent need for a more effective postal zoning system.(4) And in the summer of 1963, the Zone Improvement Plan (ZIP Code) began was introduced to the public.