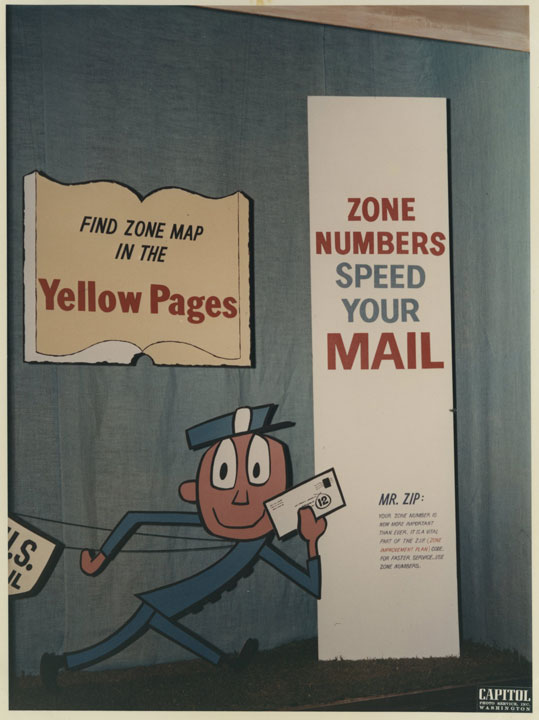 AT&T partnered with the Post Office Department to in its ZIP Code campaign, and the two only in post offices, but also in the windows of local telephone company offices. Here is Mr. Zip in a 1963 telephone company window display (courtesy, USPS).

The Post Office Department was not entirely alone in its promotion of ZIP Code. Though the Department developed the promotional campaign and orchestrated it independently for a number of years, the campaign received assistance from the American Telephone and Telegraph Company.(1) AT&T distributed its own information kits containing press releases and Mr. Zip ads similar to those distributed to local post offices to its own company offices. One press release explains the telephone company’s cooperation with the POD in the promotion of ZIP Code and refers to Mr. Zip as a “bright-eyed, dashing cartoon character.” The press release also states that the ZIP Code campaign would help draw attention to the phone book’s yellow pages, where postal zone maps could be found.(2)

AT&T placed Mr. Zip cutouts in their own local office windows and advertised ZIP Code use on the side of its telephone service trucks. The “Mr. Zip message” was displayed on the side of 500 trucks in the D.C. metro area alone.(3) Although AT&T’s involvement in the ZIP Code campaign tapered off after the first few years of the promotion, the company’s use of Mr. Zip helped make him more recognizable to the American public.

Despite its hard work, by 1965 the Post Office Department found itself struggling to achieve nationwide use of ZIP Code. At the same time, the annual volume of mail continued to increase, placing an ever-growing burden upon postal workers across the country. In response, Postmaster General Lawrence O’Brien issued a statement in which he asked for support from local postmasters of a new public information program. This new campaign would be developed and run by the Advertising Council, an organization that formed in 1941 to produce public service advertising and promote American policies and enterprise at home and abroad.(4)

O’Brien stated that the need for Ad Council intervention was “urgent,” because only half of letters mailed by individuals were at that time carried ZIP Codes. Using the terminology of the time, O’Brien referred to the difference between the ZIP Code compliant and non-users as the “Zip Gap.” The Postmaster General explained that the Department was forced to continue operating the pre-ZIP Code system of mail sorting while also using ZIP Code-readable machinery. Operating both systems cancelled out any gains. Estimates showed that ZIP Code had the potential to save the POD millions of dollars and machines would be able to read coded letters at a rate of 36,000 per hour.(5) O’Brien cited a survey which revealed that most people who were not using ZIP Codes were either unaware of their importance in moving the mail, or did not know how to find the codes that they needed.(6) It had become clear that the small staff of Post Office Department employees working on the campaign could not reach a large enough audience to close the “ZIP Gap.” The Department hoped that the Advertising Council would be able to help close the “ZIP Gap.”  First the POD had to lobby for government approval for the Ad Council’s help and related expenses.(7)

The Advertising Council asked the ad agency Wunderman, Ricotta and Kline (WR&K) to volunteer the creative and design work needed for promotions. WR&K agreed, and their work was supplemented with $18 million worth of media assistance from the Ad Council. Beginning in 1965-1966, WR&K and the Ad Council produced a number of advertisements for placement in magazines, newspapers, in bus stops and around post offices, in addition to broadcast media promotions.(8) 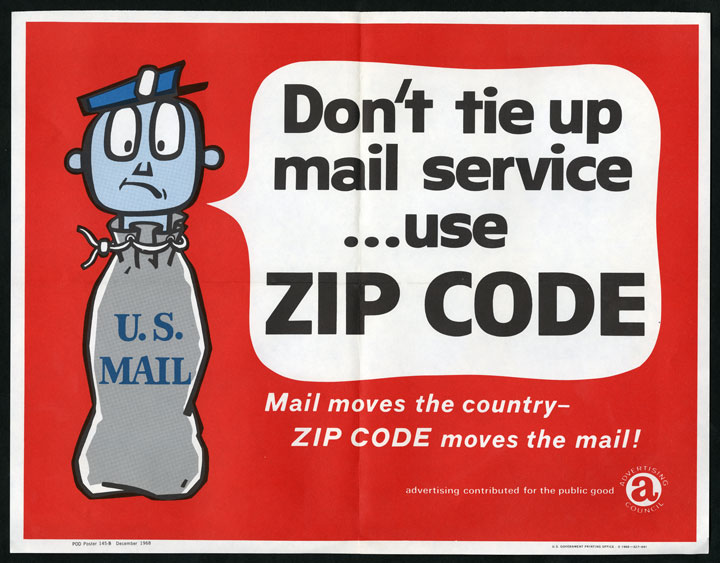 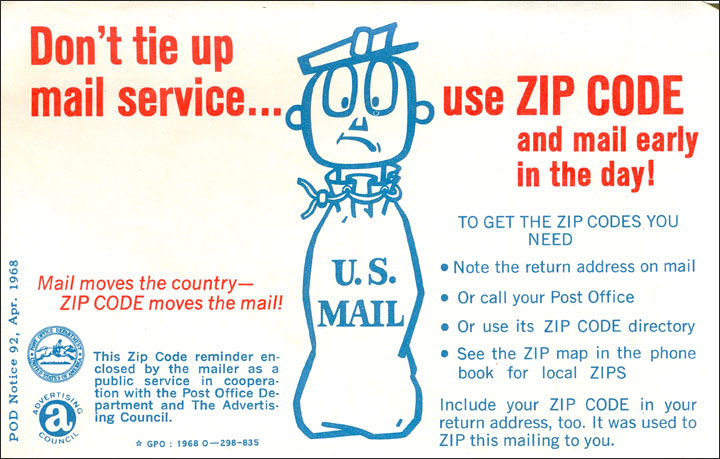 "Don't tie up mail service ...use ZIP CODE and mail early in the day!" ad. 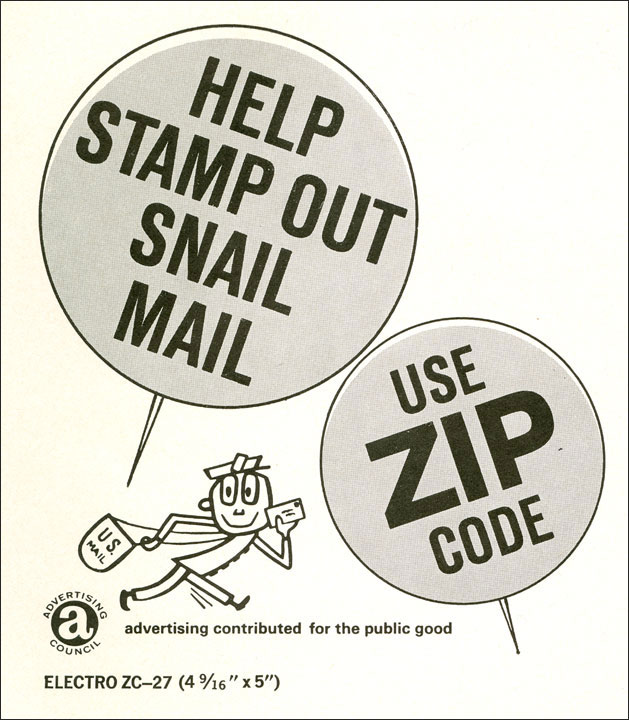 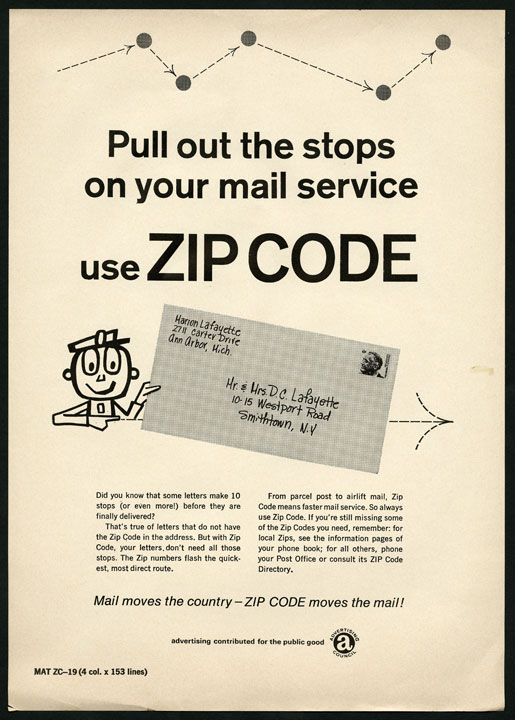 "Pull out the stops on your mail service, use ZIP CODE!" ad. 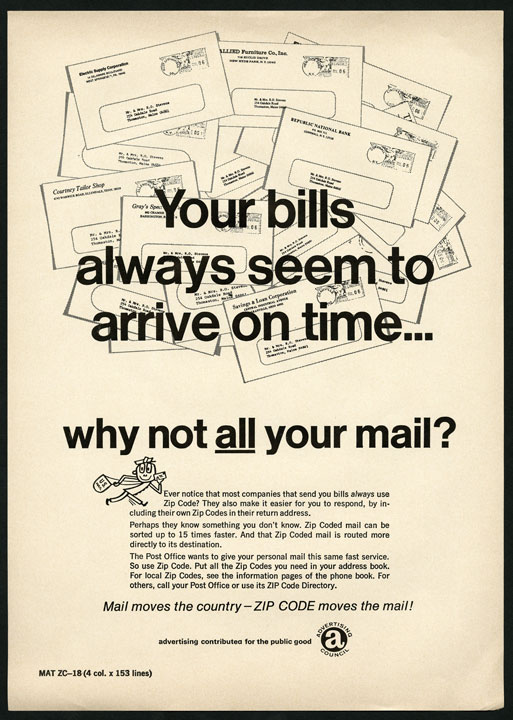 "Your bills seem to arrive on time, why not all your mail?" ad. 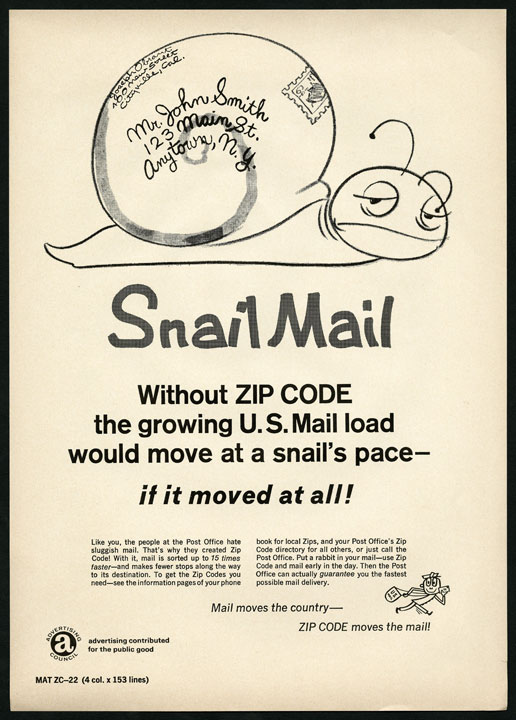 "Snail Mail. Without ZIP CODE the growing U.S. Mail load would move at a snail's pace - if it moved at all!" ad. 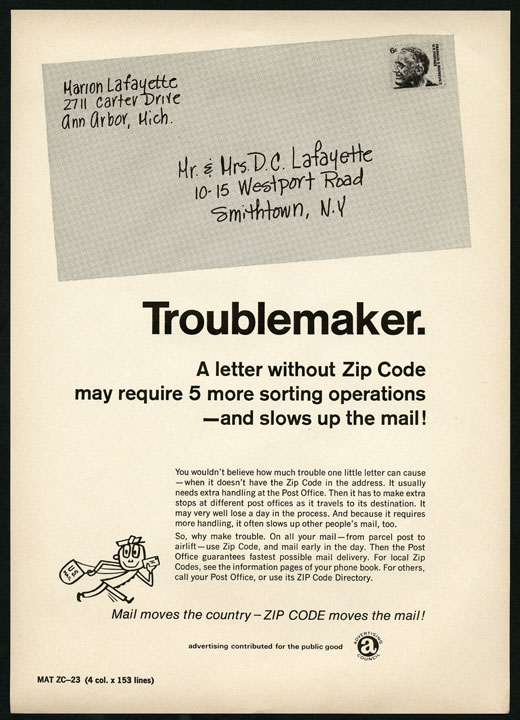 "Troublemaker. A letter without ZIP CODE may require 5 more sorting operations - and slows up the mail!" ad.

The Advertising Council and a volunteer ad agency, Wunderman, Ricotta and Kline, joined the Post Office Department’s ZIP Code promotional campaign around 1965. Together, they produced a series of new ZIP Code advertisements. Some of these ads were most likely printed in newspapers and magazines. The Ad Council also produced a color Mr. Zip envelope insert, as well as a color Mr. Zip poster. (courtesy, George Kroloff, Post Office Department).

While the Ad Council and WR&K took a large role in producing ZIP Code promotional media, the Department remained involved in the campaign. It hosted meetings where WR&K and Ad Council representatives presented print and other media advertisements for Departmental approval and made decisions regarding which ads should be used, and which needed revision.(9) In a 1967 report Ira Kapenstein, Special Assistant to the Postmaster General for Public Information, acknowledged the success of the Ad Council’s efforts. His report stated that in September of 1966, only about 44 per cent of all first class mail (personal correspondence, bills, etc.(10) had ZIP Codes in the mailing address;(11) one year later, the percentage had risen to about 63 per cent.(12) This large increase can largely be attributed to the ability of the Ad Council to saturate the American media with the “Mr. Zip message” through massive distribution of print ads and broadcast spots. The promotional materials produced and released by the Ad Council and WR&K were in addition to those still being released by the POD. Kapenstein’s report also notes that during 1966, 275 pages of ZIP Code advertising were in popular magazines; radio spots made about 280 million listener impressions, and television spots made 660 million viewer impressions.(13) Though the Department’s Office of Public Information was only able to obtain air time on limited local networks, the Ad Council placed ZIP Code broadcast media in prime time slots on an increased number of television networks.(14) Mr. Zip, though less present in radio and TV spots, began to make appearances on jewelry, toys and other consumer products.(15) The massive scope of the Ad Council campaign had succeeded in attracting a great amount of attention to Mr. Zip and ZIP Code. 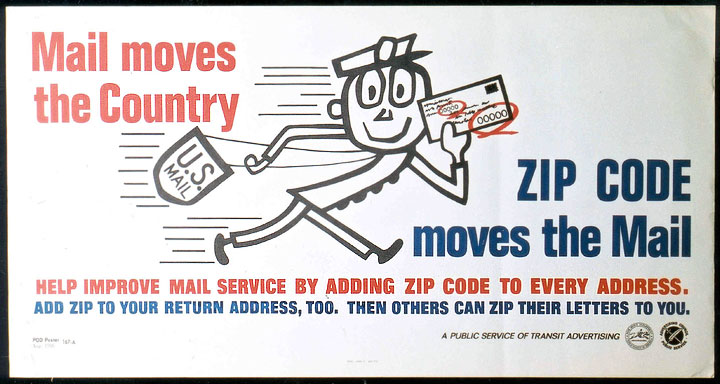 The Ad Council obtained advertising space for ZIP Code in a variety of locations. This advertisement most likely appeared in a bus or other transit station.

The involvement of the Ad Council and the volunteer agency Wunderman, Ricotta and Kline in the promotional campaign was noted by the Department as being “among the most significant forward steps during the year [1966].”  The department also proclaimed at this time that ZIP Code had become part of mainstream American life.(16) Recognition of ZIP Code had increased exceptionally because of the cooperation between the POD, the Ad Council and WR&K. The Department continued working with the Ad Council and WR&K in 1967 and 1968 and ZIP Code use continued to rise, from 75 per cent in 1968 to 84 per cent in 1969.(17)

1) It should be noted that at the time of the ZIP Code campaign, AT&T was the nation’s telephone company. It meant a great deal to the Post Office Department to have the help of the other large-scale communication organization in the U.S..

2) Suggested Press Release, Files of the historian of the USPS.

12) ZIP Code Volumes and Percentages, Files of the historian of the USPS.

17) “ZIP Code Volumes and Percentages,” Files of the historian of the USPS.

‹ Other Mr. Zip Appearances up The ZIP Code Challenge: Response of the American Public ›
Back to Top