Mr. Zip Around Town and in Local Post Offices 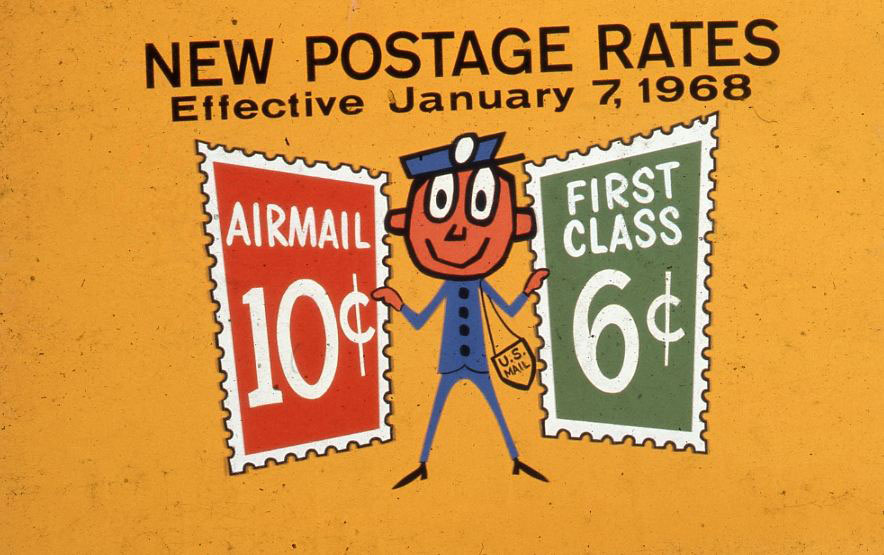 Mr. Zip did not just appear in ZIP Code promotions. The Post Office Department featured Mr. Zip in an advertisement announcing the 1968 increase in postage rates.

Immediately following the implementation of the ZIP Code system, Mr. Zip began appearing in various forms around big cities and small towns. His likeness was soon displayed everywhere, from local post offices to the sides of mail delivery vehicles. It was these images of Mr. Zip around town that first made him into a household name and called early attention to the ZIP Code system.

It has been noted that the actions of local post offices across the country to promote ZIP Code were indispensible to the success of the promotional campaign and to the eventual widespread use of ZIP Codes.(1) As evidenced by the instructions to local postal employees published in the Postal Bulletin,the Post Office Department recognized the importance of using post offices early on, and it sent memos to local postmasters stressing the urgency of promoting ZIP Code in towns and cities, large and small, across the country.(2) The Department sent packets of information, which contained things such as sample press releases, to local post offices for use in ZIP Code promotions within their communities. One press packet contained a news feature that postmasters could choose to run in a local paper. The feature states, “[Mr. Zip] won’t be seen on the comic pages. In fact, Postmaster [fill in name of local postmaster] says, he [Mr. Zip] is expected to perform a much more vital role in both the business and social life of the community.”(3) This indicates that the POD wanted communities to integrate Mr. Zip into local social events and the very fabric of town life. The information packets sent to local post offices were extremely important, as they provided them with the tools they needed to get the “Mr. Zip” message out to their communities. 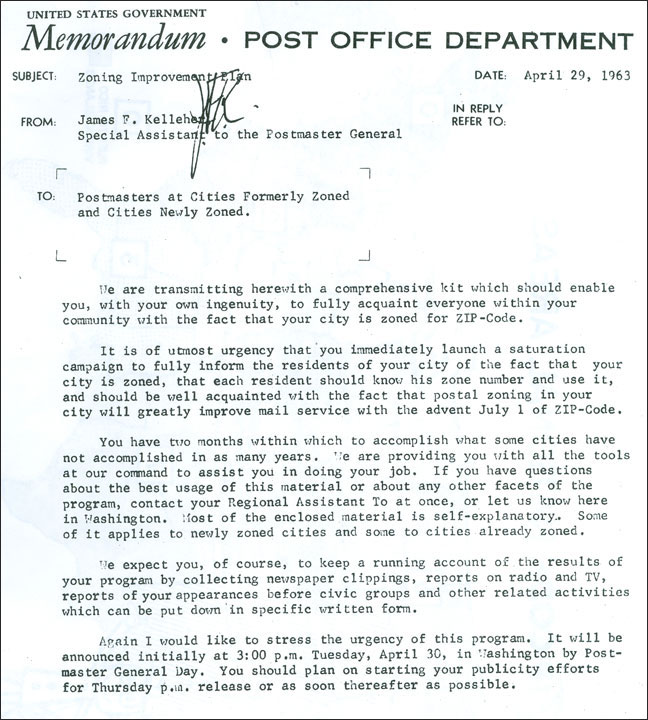 In addition to providing information packets, the Post Office Department encouraged local post office employees to wear Mr. Zip buttons and letter carriers to display Mr. Zip decals on their letter satchels. Over the course of the ZIP Code promotional campaign, Mr. Zip appeared on buttons worn by 50,000 post office window clerks and on the uniforms of 125,000 letter carriers.(4) His presence also graced the lobbies of post offices across the country. Cutout Mr. Zip figures, also produced by the Department for use in local post offices, were used to remind mailers to use ZIP Codes on their letters. The letter in Mr. Zip’s hand would also often offer a friendly reminder of the town or city’s ZIP Code, and some of the Mr. Zip cutouts even included recorded explanations emphasizing the importance of using ZIP Code that would play at the push of a button. In addition to appearing in post office lobbies and on the uniforms of post office clerks and letter carriers, Mr. Zip also caught public attention from his spot on the side of mail delivery vehicles. These vehicles were one of the most visible parts of the Department, as they were seen driving up and downs streets across the country on a daily basis. Placing the Mr. Zip image on the sides of mail vehicles was a guaranteed way to raise local awareness of ZIP Codes. The Postal Bulletin from July 25, 1963 states that ZIP Code posters were to be displayed on delivery vehicles, and were to remain permanent when no other poster display was specified.(5) 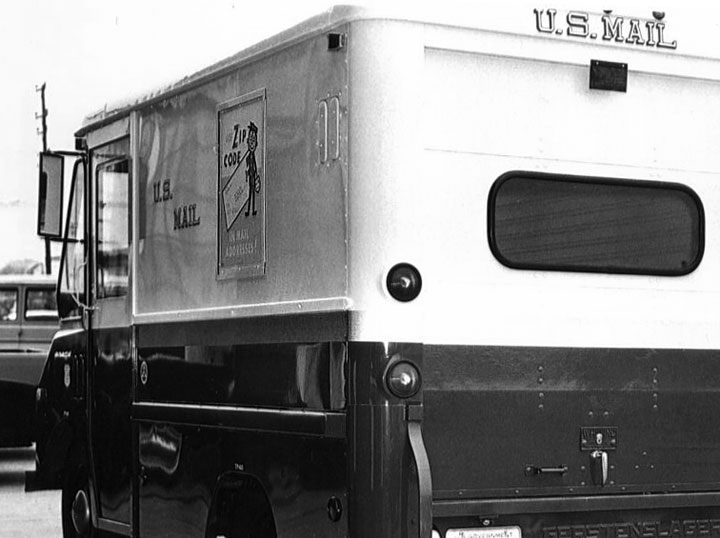 Mr. Zip posters were displayed on the sides of postal delivery vehicles during the 1960’s (courtesy, National Archives and Records Administration).

In addition to using promotional materials provided from the Washington headquarters, local post offices came up with their own unique ways to promote ZIP Code and use Mr. Zip. For instance, the September, 1963 issue of the Postal Record mentions that a Mr. Zip float in the Wheaton, Illinois 4th of July parade was well received by community members. The small float with a cutout of Mr. Zip on it was pulled by a tractor and led by the local Postmaster, Assistant Postmaster, and a number of letter carriers.(6) Mr. Zip’s likeness was also known to appear at other community events such as boat races and county fairs.(7) Successful local ZIP Code promotional events were often noted by the Department and used as examples to inspire additional promotions in cities and towns across the country. 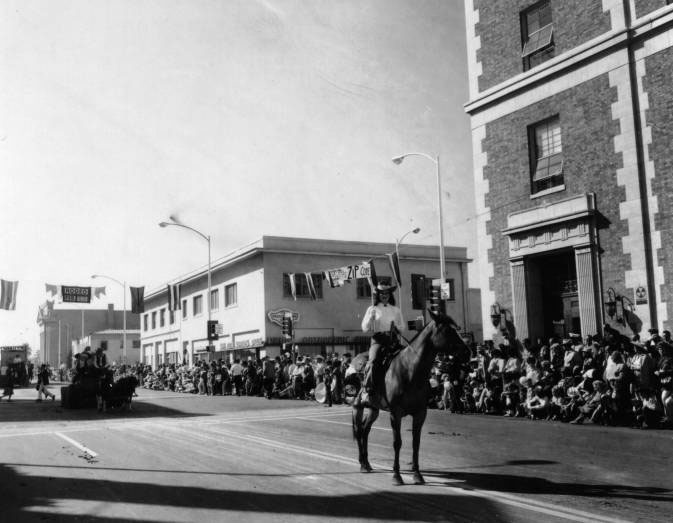 The work of local post offices was essential to the success of ZIP Code and many towns and cities across the country hosted ZIP Code events in order to promote the new system. A ZIP Code parade was held in the Tucson area in 1965 (ZIP Code Parade 2 1965, courtesy Postal History Foundation, obtained from www.azmemory.lib.az.us).

The idea that Mr. Zip needed a female counterpart seems to have swept through many communities during the first several years of the ZIP Code campaign. A number of “Miss ZIPs” were crowned at local post office banquets and dances. Doe Stella, a Tucson, Arizona area woman who was crowned Miss ZIP, posed with a postal employee and a Mr. Zip image.(8) In addition, a local Miami, Florida post office crowned “pretty 19 year old Janet Swanson” the city’s “Zip Girl.”  It was noted that the Zip Girl beauty contest received “wide and favorable publicity.”(9) These types of promotional events cast a favorable light upon the ZIP Code system and no doubt contributed to its public acceptance. 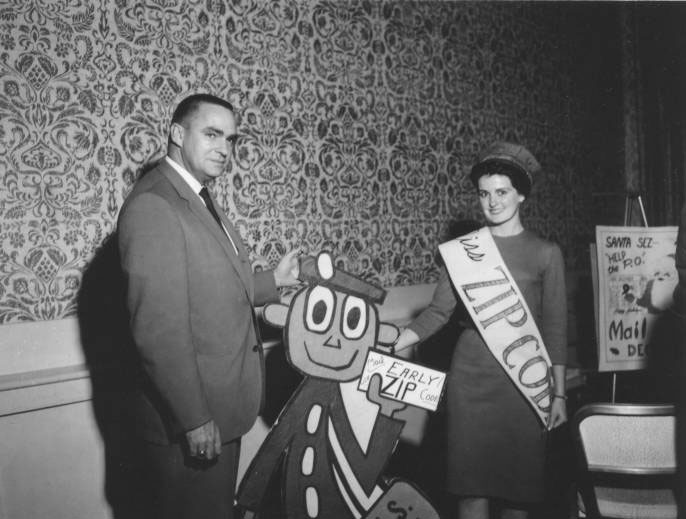 Doe Stella, from the Tucson, Arizona area, poses with Mr. Zip and the Post Office Department’s Director of Customer Relations in 1964. She, like other women across the country, was crowned Miss ZIP as part of the ZIP Code promotional campaign. (Posing with Mr. Zip 1964, courtesy Postal History Foundation, obtained from http://azmemory.lib.az.us).

Banquets hosted by local post offices provided a means to recognize local business owners and community members who were doing a good job of consistently using ZIP Codes in their mailings. Such banquets and ceremonies probably persuaded fellow community members to use ZIP Codes, and made the use of the five digit code more popular.(10)

Although Mr. Zip himself never appeared on actual postage stamps, he did appear in the margin, or selvage, of stamps. His first appearance was on the selvage of the Sam Houston five-cent commemorative stamp in 1964. His appearance on stamp selvage would become commonplace until his retirement in the 1980’s. On certain issues, he appears standing with one arm gesturing toward the stamp design, or running with a letter in his hand. On others, just his head is pictured, and on a rare few selvages, he appears standing straight, holding a letter.(11) 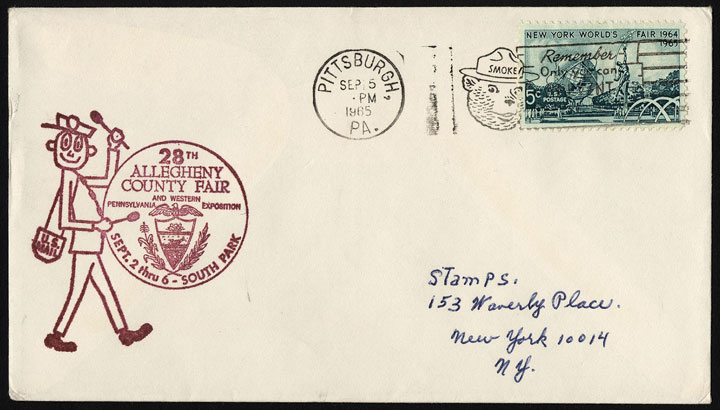 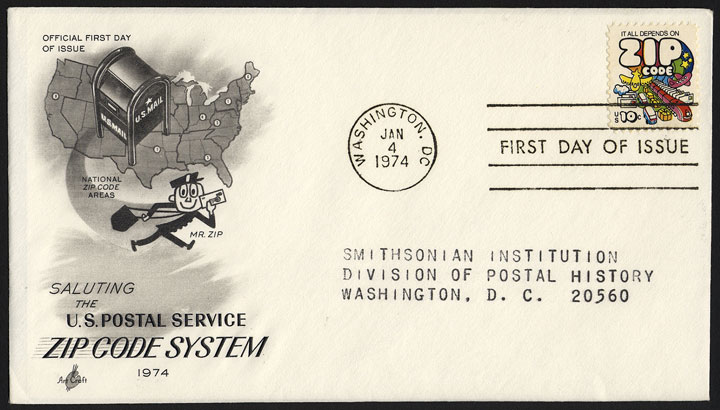 Throughout the 1960’s and 1970’s, Mr. Zip cachets (such as the stamped design on this envelope) appeared on covers (envelopes that had been sent through the mail). Here, a Mr. Zip cachet advertises Pennsylvania’s 1965 Allegheny County Fair. Mr. Zip was also celebrated on covers from the 1974 ZIP Code stamp issuing.

Around the mid 1960’s, the Post Office Department conducted experimental promotions of an event called “ZIP Code Week” in a dozen cities across the country. The success of the experiments led the Department to hold a National ZIP Code Week. This was an intensive ZIP Code educational campaign which focused on large cities which contained multiple ZIP Code zones.(12) The original ZIP Code Week took place between October 10th and October 15th 1966, and 302 cities across the country participated. POD released a ZIP Code Week information booklet to assist cities in planning their events and festivities. The booklet stated that the involvement of the entire community was expected, and that cities were to engage all forms of media, as well as schools, businesses, church groups, women’s clubs, civic organizations, etc. in the promotion of ZIP Code.(13) The booklet also suggested that local businesses display ZIP Code signs in their windows, or promote the system in other ways.(14)

In addition, National ZIP Code Week served as a way to remind business mailers that as of January 1, 1967, they would berequired to use ZIP Code in their mailing addresses.(15) (The Department was able to encourage high cooperation by offering incentives in the form of cheaper mailing rates to large volume, business mailers. In order to get the cheaper rate, the mailer had to include ZIP Codes on all mail pieces).

Mr. Zip was easily incorporated into ZIP Code Week festivities. For instance, the information booklet released by the Post Office Department included a list of suggested promotional materials to be used during the week. The list featured Mr. Zip posters, leaflets, and a promotional film with an appearance by Mr. Zip.(16) The booklet identified school-age children as an important audience to target in ZIP Code promotions: “The child who is taught to appreciate the value of ZIP Code can be a tremendous asset in reminding both parents and playmates to use ZIP Code.”(17) It was suggested that school teachers utilize sample lessons on ZIP Code that were provided in the Postmaster’s ZIP Code Promotion Kit. As part of such lessons, teachers were prompted to distribute copies of “Mr. Zip and the 5 Little Digits,” a cartoon page created by the Department specifically for distribution in schools.(18) In the cartoon, Mr. Zip explains how ZIP Codes work to move the mail in a faster, more efficient way.(19) Appealing to children would continue to be a goal of the campaign, as the POD recognized them as mail users of tomorrow and as potential influences on their parents’ mailing habits. 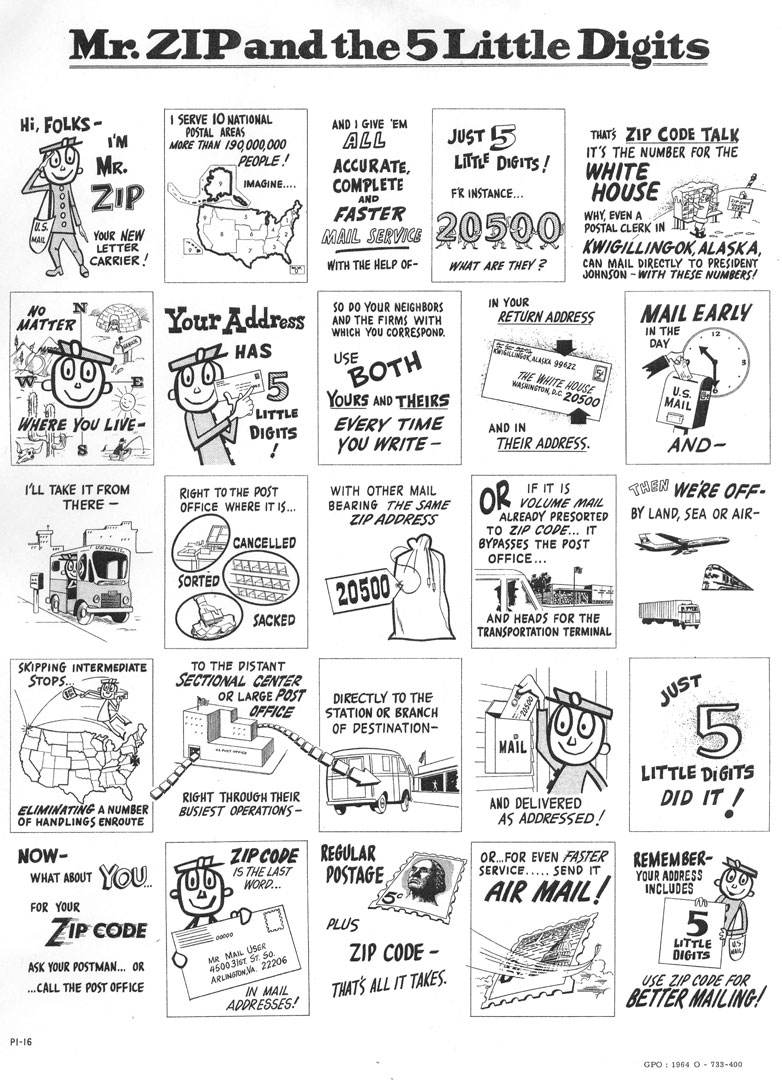 In 1964, the Post Office Department released a Mr. Zip cartoon, entitled, “Mr. Zip and the 5 Little Digits,” which was created specifically for distribution in American schools. The Department recognized the importance of marketing ZIP Code to children, the “mail users of tomorrow.

7) ZIP Code Promotional Materials, Files of the historian of the USPS.

‹ The ZIP Code Promotional Campaign up Other Mr. Zip Appearances ›
Back to Top