Mr. Zip as a Pop Icon 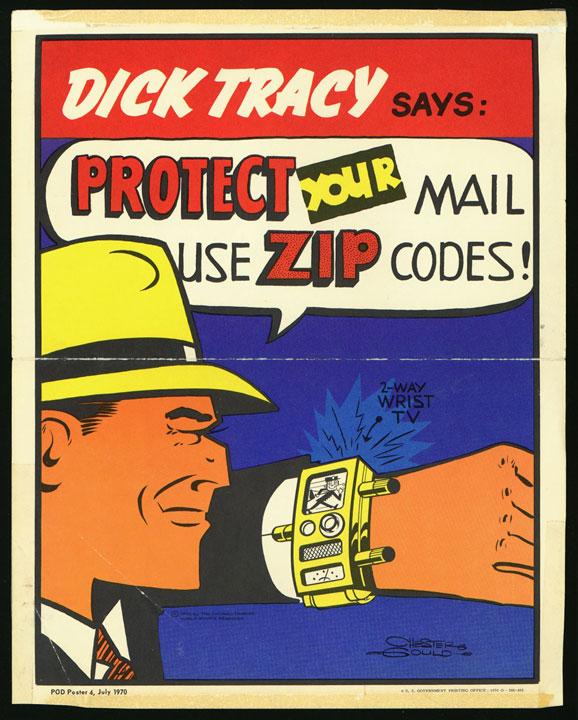 The Post Office Department creatively incorporated Mr. Zip into the world of American popular culture. In this promotional poster, he appears on the wrist TV of comic strip detective Dick Tracy.

In the midst of praise and complaints about the ZIP Code campaign, Mr. Zip was becoming more than just a household name. The fact that he was appearing in magazines and newspapers, on mail delivery vehicles, in post office lobbies, on the television and radio, as well as popping up in personal mailboxes thanks to the ZIP-A-List campaign, made him into an icon of popular culture. Mr. Zip was everywhere, most notably in the years between 1963 and 1969, and the saturation of American media with his image, as well as his message promoting the use of ZIP Code gave him iconic status. As noted by postal employees, Mr. Zip himself was nothing fancy, just a simply drawn character. It was what he stood for and what he personified that made him unique.(1) 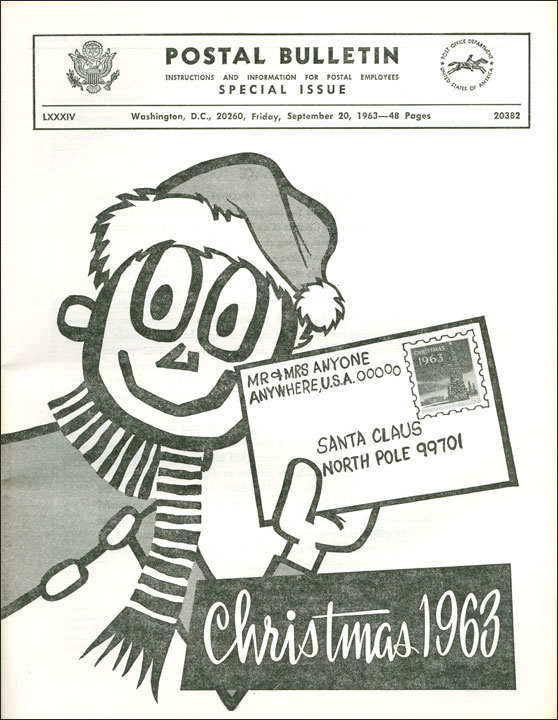 Beginning in 1963, Mr. Zip was presented to the America public in a variety of unique ways. In addition to appearing in advertisements and broadcast public service announcements, he also appeared in formats linked to entertainment and fun. It seems that the incorporation of Mr. Zip into American popular culture was, in part, the result of deliberate actions on the part of the Post Office Department. In a localized feature released to cities for publication in local newspapers, the POD stated, “We fully expect Mr. Zip to become as familiar a figure as the Agriculture Department’s Smokey Bear.”(2) In addition, Mr. Zip was featured in a four-page comic strip released by the Post Office Department.(3) While the comic strip focused on Mr. Zip explaining how ZIP Codes work and why Americans should use ZIP code, the fact that this message was being sent via a medium of popular American entertainment shows that the Post Office Department was conscious that by putting Mr. Zip into a “pop culture format,” it could make ZIP Code more appealing to Americans. The Department even linked Mr. Zip to Santa Claus by inviting children to include the North Pole’s ZIP Code in their letters to Santa. Mr. Zip was referred to as “Santa’s helper,” and he appeared on the cover of a special issue of Postal Bulletin in fall of 1963. Postal Bulletin also explained that all correctly ZIP coded Santa letters should be removed from the mail at local post offices, where Santa reply cards would be addressed and delivered to the children.(4) 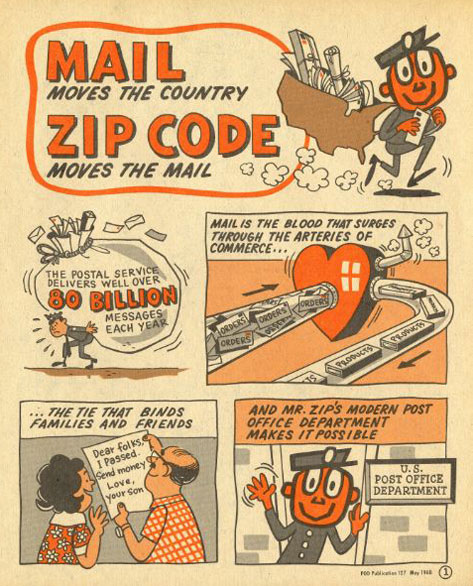 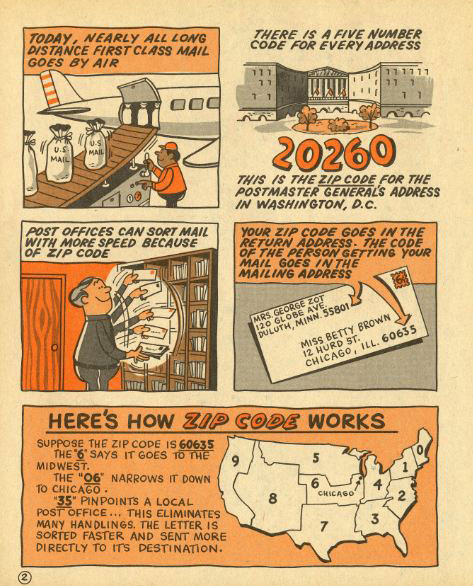 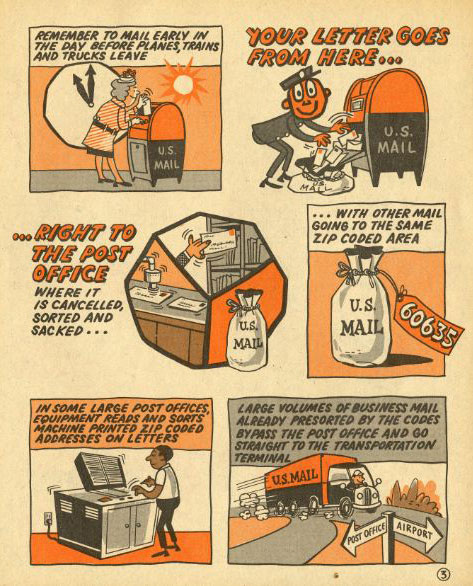 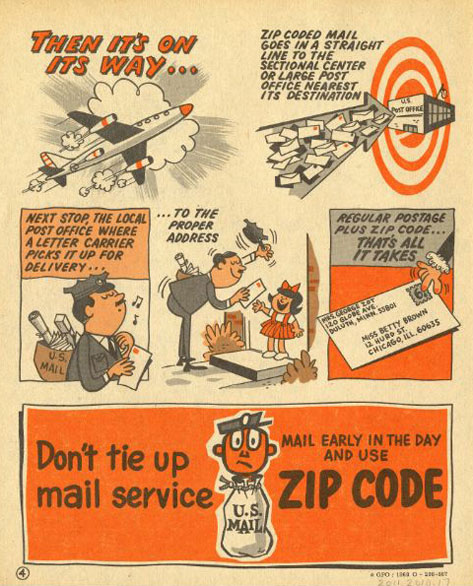 The Mr. Zip comic, entitled, “Mail Moves the Country, ZIP Code Moves the Mail” was created by the Post Office Department in 1968.

The Post Office Department also used celebrity endorsements to promote ZIP Code. One of the first celebrities to endorse ZIP was Johnny Puleo, an American singer, actor and harmonica player. In an advertisement filmed for television broadcast, Puleo urged Americans to use ZIP Code near a Mr. Zip cutout image. Another celebrity used during the ZIP Code campaign was Broadway singer Ethel Merman. She volunteered her talents to sing a ZIP Code promotional jingle to the tune of Zip-A-Dee-Doo-Dah around 1963. Mr. Zip appeared in a television spot introducing ZIP Code in which Merman’s voice is featured.

Ethel Merman: Welcome to ZIP code, learn it today. Send your mail out the five-digit way.

The emergence of Mr. Zip images on stamp margins in 1964 resulted in a new trend in stamp collecting. The Zippy Collectors Club was formed in 1972 for Mr. Zip enthusiasts interested in collecting stamps featuring Mr. Zip in the margin and all manner of Mr. Zip paraphernalia.(5)

Mr. Zip has also appeared on a number of consumer products from the 1960’s through today. He showed up on a tin lunch box and thermos set designed for school children, on a tin bank, as well as on the front of the ZIP Code board game (all produced during the 1960’s ZIP Code promotional campaign). In addition, the USPS currently licenses select companies to produce consumer products using the Mr. Zip trademark.(6) As a result, there are a number of Mr. Zip products on the market today. They include a toy mail car and a toy train featuring Mr. Zip, Mr. Zip jewelry, apparel, tote bags, a bobble head doll, and mugs, among other things. The existence of these products indicates that decades after his introduction there is still a consumer market for Mr. Zip, and that he remains a recognized part of America’s pop culture history. 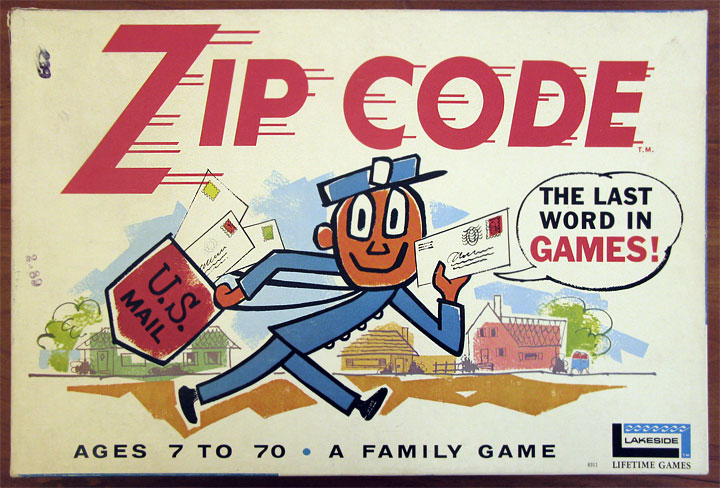 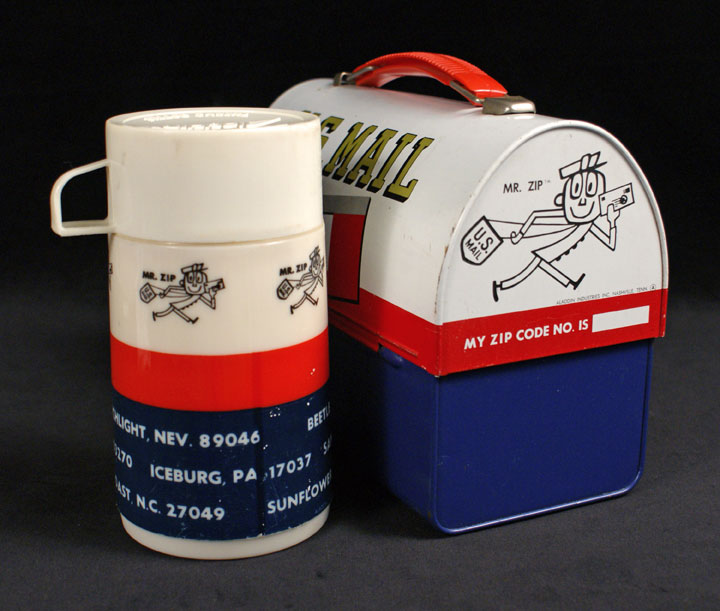 Mr. Zip appeared on consumer products such as ZIP Code board game, and on a children’s lunchbox and thermos. The commercialization of Mr. Zip helped draw attention to ZIP Code.

Ethel Merman
‹ ZIP Code and Mr. Zip in the News: What the Media Had to Say up Fine Tuning ZIP Code and the Retirement of Mr. Zip ›
Back to Top