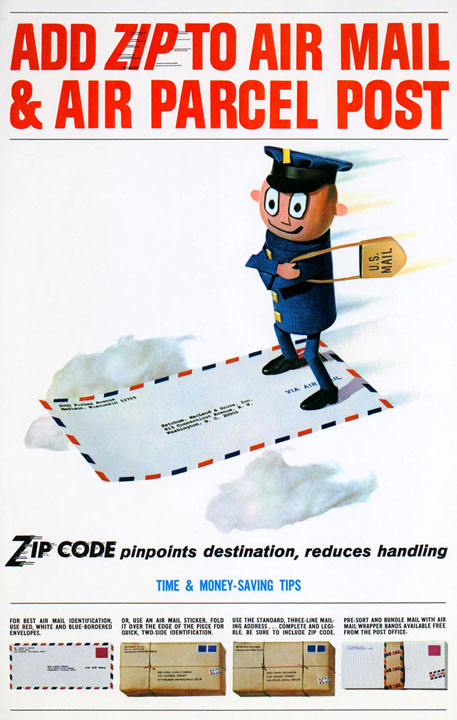 This unique ad features a three dimensional Mr. Zip catching a ride on a piece of airmail.

It is clear that Mr. Zip and the ZIP Code promotional campaign were a great success, especially after the Ad Council began working with the Department. By 1970, ZIP Code use had reached 86 per cent, and by 1979 it was reported at 97 per cent.(1) Because the POD never considered not using Mr. Zip in its promotional campaign, it is nearly impossible to know if Americans would have responded to ZIP Code any differently without him. However, his presence in print ads and in other forms of media most likely gave Americans a reason to respond more favorably to the new system. The ingenious nature of the way Mr. Zip was used in marketing cannot be denied. Print, television and radio advertisements featuring Mr. Zip consistently used words such as “easy,” “faster” and “zip,” to place an emphasis on the efficiency that the ZIP Code system was expected to bring to mail delivery. Mr. Zip very effectively personified the speed that ZIP Codes were predicted to give the mail, as he was often pictured as though running along, with his mail bag flying behind him.

1) “ZIP Code Volumes and Percentages,” Files of the historian of the USPS.

A Mascot for Speedy Mail
‹ Fine Tuning ZIP Code and the Retirement of Mr. Zip up
Back to Top