The ZIP Code Challenge: Response of the American Public 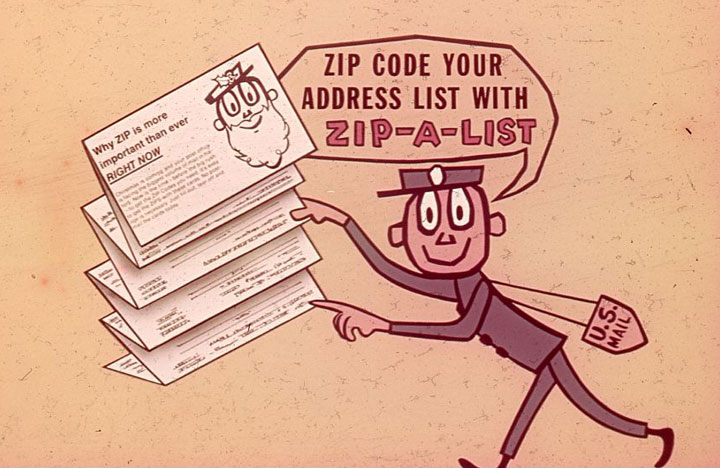 After realizing that members of the American public were having difficulty obtaining the ZIP Codes they needed for correspondence, the Post Office Department distributed ZIP-A-List Kits to every mailbox in the country.

Persuading the American public to accept and use ZIP Codes was noted by former postal employees as the Department’s most significant challenge over the course of the ZIP Code campaign.(1) The launch of ZIP Code in 1963 came at a time when Americans were already struggling to accept the use of new area code digits being added to the front of telephone numbers; therefore, they were especially annoyed that they had yet another set of numbers to memorize. A column from humorist Art Buchwald of the Washington Post, Times Herald on July 30, 1963, entitled, “The Numbers Racket,” offers insight into this fact.(2) Appearing only about one month after ZIP Code’s implementation, “The Numbers Racket” conveys the attitude held by many Americans early on in the ZIP Code campaign – that numbers only make life more complicated. On top of having to remember their own ZIP Code, Americans would also have to know the codes for everyone they wished to send mail to. This made for more hassle than most were willing to accept. Though ZIP Code directories were made available by the Post Office Department early in the campaign, many people seemed not know how to obtain them. Americans were told to contact their local post offices in order to obtain the codes they needed, but again, this seemed to be extra work, and many Americans chose not to put forth the effort. Many Americans also did not understand how the ZIP Code system operated, and doubted that the system would speed up their mail.

With fear of Communism still strong in Cold War America, some people feared that the creation of ZIP Code was a conspiracy to depersonalize or dehumanize them.(3)  Personality and individuality were at the heart of American identity; being assigned an identification number was not. Thus, at the time of their implementation, ZIP Codes were seen by some as distinctly un-American and even possibly part of a Communist plot to undermine American culture!

Postal Employees:
Some postal workers had issues with the new ZIP code system and its cheery representative. They voiced their opinions in Postal Record, a monthly publication of the National Association of Letter Carriers. An employee from Medford, Oregon wrote in to the publication in September, 1963 stating, “I believe our Postal Department has goofed, and this may well bury Mr. Zip amid jeers and laughter from those who do not understand the reason for this…The public should be better informed. They should know the reasons for Mr. Zip and the expected results.”(4) A Fort Worth, Texas employee declared in the August, 1967 Postal Record, “I am tired of the image of the American Letter Carrier being held up to public ridicule. No Letter Carrier that I have ever seen looks as absurd as Mr. Zip.”(5)

Other postal employees saw ZIP Code processing as a challenge to their jobs, and some even viewed Mr. Zip as an insulting caricature of a letter carrier. The March, 1964 issue of Postal Record contained the following comment from a Michigan employee: “ZIP Code…ZIP Code…How long is the Post Office Department going to go on fooling the public with fancy abbreviations?  The only thing we get with ZIP Code is extra costs with massive machines…”(6) Another employee from Kentucky commented to Postal Record in September, 1965 that, “…If the money and effort wasted on the ZIP program was wisely used to restore curtailed service, both first class and Parcel Post, we would be much better off. Remember the good old days when Postal Employees were respected people and friends to those they served?”(7) These two disgruntled employees clearly seem slighted by the launch of a system that would most likely have a dramatic impact on their jobs.

ZIP Code did symbolize great change in an era of non-mechanical mail sorting, and it did threaten the jobs of certain postal workers. This fact was explored in a September, 1967 article in the Chicago Tribune entitled, “Mr. Zip Takes Over.” The article discussed the idea that ZIP Code and the mechanization of mail sorting were taking the romance out of mail delivery. The article states, “A certain craftsman will be eliminated by the grinning Mr. Zip.”  The craftsman the article refers to is the railway mail clerk. These men sorted mail on trains en route to their destination. With the advent of ZIP Coding and moving mail via other forms of transportation, the mail sorting process had become less of an art.(8) However, the end of railway mail service, which arrived in 1977, was from a combination of factors, not the least of which was the dramatic decline in railway line traffic since the 1940s. As mail moved from trains to airplanes and highways, the Post Office Department worked to re-centralize the system by reestablishing a series of mail distribution centers that would handle the bulk of mail processing.(9)

Though it is clear that many postal workers disliked ZIP Code, especially those whose jobs were tied to mail processing, a Washington Post, Times Herald article from June, 1969 entitled, “Mailmen Accept ZIP Code as Beneficial,” reported that letter carriers were coming around to the idea of using the five digit codes. “The ZIP Code is working well,” they said, “far better than we anticipated when it was first introduced.”(10)

The general Public:
As mentioned previously, there was a small, yet vocal group of Americans who openly opposed the implementation of ZIP Code for a variety of reasons. Complaints that citizens couldn’t find the ZIP Codes they needed were acknowledged by the Post Office Department, and in response, it issued “ZIP-A-List” kits to nearly every mailbox in the United States. These kits consisted of nine postcards, attached to each other and folded accordion style. Americans could write an address for which they needed a ZIP Code on each card and send them back to the Post Office Department for free. The Department would then send each person the ZIP Codes they needed. Mr. Zip’s image was on each of the cards in the ZIP-A-List kit.

Most Americans saw the ZIP-A-List kits as a helpful way to collect the codes they needed. One woman, however, returned her postcards back to the Post Office Department. On them she had added notes of condemnation. One of her messages read, “Dear Sir, Zip Code is a complete boo-boo and you just don’t want to admit it. It has set our mail delivery back 100 years!”  Another stated, “The Pony Express would be more efficient and much desired to take letters to towns close by.”(11) Though a large number of Americans were annoyed about using ZIP Code, the general opinion toward the system improved as the national effort to promote it gained strength and as people realized that ZIP Codes really did increase the speed of mail delivery.(12)

The Post Office Department also recognized the annoyance many Americans felt with having to memorize another number, thus, it did everything it could to “personalize” the ZIP Code campaign. The POD reminded Americans that the codes were not something that would erase individuality,(13) but were for places – not people.

Though there was some negative reaction to ZIP Codes, the majority of Americans seemed to adjust well to adding the extra five digits to the end of mailing addresses. In the post World War II era, when progress and efficiency were desirable in all aspects of everyday life, it was hard to say no to a system that had the ability to improve the efficiency of the mail.

‹ Helping Hands - AT&T and the Advertising Council up ZIP Code and Mr. Zip in the News: What the Media Had to Say ›
Back to Top